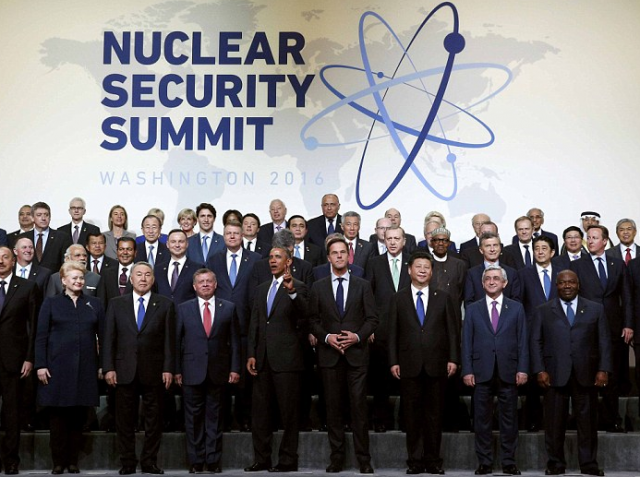 About 2 weeks ago, I noted that the limp-wristed handshake with Cuba’s acting dictator Raul Castro perfectly captured Obama’s presidency.

Surrounded by world leaders, President Barack Obama gave the peace sign as they gathered for a ‘team photo’ during a two-day nuclear summit.

All eyes were on Obama as 54 other presidents and prime ministers joined him in Washington, DC, for crunch talks on Iran and terrorist threats involving nuclear weapons.

There was one set of eyes, however, that was particularly focused on the President – those of Prime Minister David Cameron.

Relations between Cameron and Obama have been strained since the President criticized the Prime Minister for getting ‘distracted’ during the crisis in Libya and turning it into a ‘s**t show’.

There was more than metaphorical distance between the pair at today’s summit, with Cameron only able to glare at Obama from across the podium as he was elbowed out to the edge of the stage.

A close-up of our President looking less than presidential: 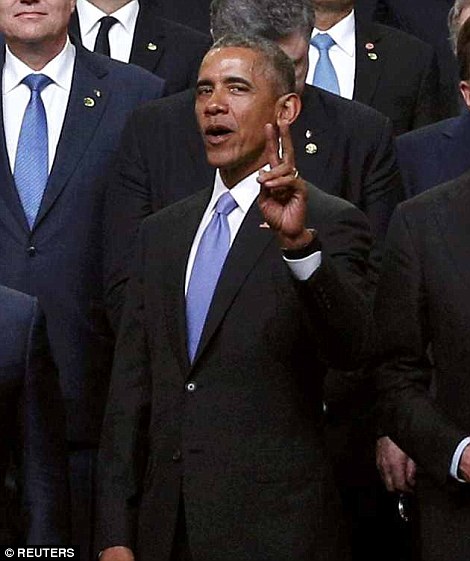 During the summit, President Obama asserted that his policies have reduced the risk of a nuclear attack.

Addressing the summit, he said that while no terror group had succeeded in getting hold of enough nuclear materials to make a dirty bomb, al-Qaeda had wanted to and Isis has already used chemical weapons.

He warned that there was no doubt if “madmen” in Isis obtained nuclear material, they would use it to kill as many people as possible.

“We have measurably reduced the risk,” he said.

Obviously, Obama was making a April Fool’s Day joke. While ISIS may not—yet—have fissile materials, other less-than-friendly or rational entities do.

The North Koreans plan to continue their robust development of weapons:

North Korea will pursue its nuclear and ballistic missile program in defiance of the United States and its allies, a top Pyongyang envoy said on Friday, adding that a state of “semi-war” now existed on the divided Korean peninsula.

So Se Pyong, North Korea’s ambassador to the United Nations in Geneva, denounced the huge joint U.S.-South Korean military exercises taking place which he said were aimed at “decapitation of the supreme leadership of the DPRK (Democratic People’s Republic of Korea)” and conquering Pyongyang.

North Korea conducted a fourth nuclear test in January and launched a long-range rocket in February. The South Korean military said on Friday that North Korea had fired a missile into the sea off its east coast.

Additionally, as my colleague Vijeta noted, Iran has embarked on an ambitious military build-up that includes repeated testing of ballistic missiles capable to carrying nuclear warheads and never before seen in the history of the Middle East…unconcerned about an Obama snap-back!

Given how Obama acted today, literally on the world stage, why should anyone take his administration seriously?

[Featured image via The Daily Mail]

Obama is certainly the worst President of the last century, most likely of all time. He comes from an enclosed world view held by leftist academics: that American influence is the root of evil in the world and that, if left to their own devices, other nations would do better on their own.

Although there was never any rational basis for this philosophy of foreign relations, and its limited imposition both under Obama and previously invariably led to problems, he has plowed ahead full-force to implement his agenda. The damage will take decades to undo.

Is anybody else wondering whether he’s on something, again?

Were there any signs he was ever off the drugs?

Not so much embarrassed as worried that the man puts us in mortal danger. He is weak and ignorant.

“During the summit, President Obama asserted that his policies have reduced the risk of a nuclear attack.”

Which means there will be a nuclear attack.

obama, and those who voted for him, beclowned America.

Only 292 more days until the glorious dawn of Obama’s last day in office.

Tens of millions of men, women, and children, murdered, raped, and displaced by his progressive wars… and that doesn’t include the disarmed, decapitated human beings terminated and cannibalized under the selective-child doctrine of his pro-choice cult.

Obama is truly protected by gods from the twilight zone.

They’re not gods from the Twilight zone. They’re corrupt propagandists holding themselves out as ‘news’ enabled by entrenched, corrupt hacks of the GOPe.

I’ve called him ‘Obo the Clown’, for years now.

The scary kind, of course.

I prefer to refer to him neither by name nor title, simply “the current occupant of the Oval Office”.

In his mind (such as it is), he probably thinks flashing the peace sign goes with his Nobel Peace Prize.

Give the guy a break. Having been raised in the hood, he likes to make gang signs. I mean, those upper middle class schools populated by rich white folk back home in Hawaii that he grew up with were making all kinds of signs when they hanging ten. So, the dude is just keeping it real.

He was not giving a peace sign. He was responding to a question regarding how many rogue enemy nations he has helped develop their nuclear weaponry.

Never send a boy to do a man’s job.