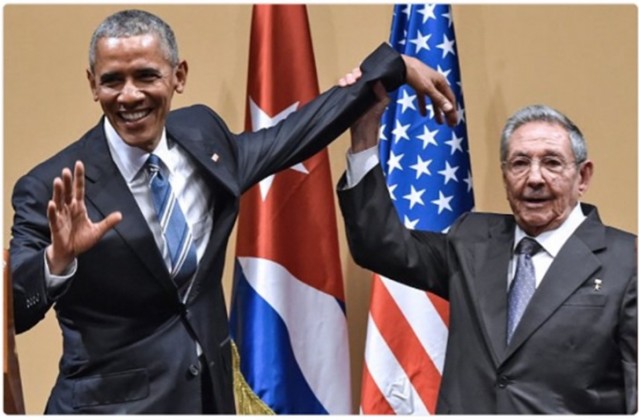 If one moment can perfectly capture the amalgam of arrogance and absurdity that is President Obama, his handshake with Cuba’s Raul Castro would be it:

In the moments after the end of a historic press conference held by President Barack Obama and President Raul Castro in Havana, Cuba, what began as a regular handshake morphed into … something else. The Cuban leader raised Obama’s limp arm above his head and held it there for a few seconds.

The move most closely resembled a wrestling referee announcing the winner of a wrestling match. Only way more awkward.

To say that picture went viral on social media would be an understatement:

That awkward moment when a repressive Cuban dictator tries to get you to lift arms together w/ him (hint: go limp): https://t.co/g67PQyJbD9

As Stella so aptly notes, some supporters are less than comfortable with Obama’s “Spring Break” in Cuba. Fox News contributor and staunch progressive Juan Williams says the trip is a mistake, especially based on his family’s experience in fleeing oppression in Panama:

But to people living in those nations, the reality is that the revolutionaries became cruel, oppressive dictators in the case of Arias, the late Venezuela President Hugo Chavez and most of all, Fidel Castro.

Given my scars, President Obama’s trip to Cuba later this month leaves a bitter taste in my mouth.

To me, it is painful to see the president of a nation based on individual liberty and protection of rights under law have to keep silent about the thousands of people who have suffered oppression at the hands of the Castro regime.

The ensuing meetings are likely going to be even more awkward.

In an extraordinary news conference Monday afternoon, President Obama and Cuban President Raúl Castro sparred over human rights, the Guantanamo prison and their views of their own countries and the world, even as both hailed Obama’s historic visit here as a new step in normalizing relations.

The event was marked by a jarring juxtaposition of diplomatic formality and public jousting, as Castro responded to questions from American reporters by either ignoring them or dismissing them as misguided. At one point, he challenged a U.S. journalist to “give me a name” of any alleged political prisoner here.

Naming oppressed political opponents might have been easier for members of the press if the Castro brothers didn’t have them rounded up prior to Obama’s visit.

Women demanding free speech and democracy in Cuba were dragged kicking and screaming from a protest march ahead of President Obama’s arrival in Havana on Sunday.

More than 50 anti-government protesters were arrested at the Damas de Blanco (Ladies in White) demonstration as the Castro regime cracked down on dissidents ahead of the president’s visit.

The protest group holds a weekly rally outside a cathedral in an upmarket neighborhood of the Cuban capital, with hundreds of women and their male supporters calling for an end to political imprisonment in the communist state.

I chat with Cuban-American and conservative talk show host Silvio Canto Jr. often, who noted the Castro brother antics involving the Ladies in White ahead of the recent papal visit. Canto Talk’s next show will focus on the Obama visit as seen through the eyes of Cuban Americans. The normally effusive host finds it hard to express his disappointment:

“Obama’s statements about Cuba’s gains on education and health care were [during the press conference] were awful. Obama giving the Castros legitimacy is awful.”

Awkward and awful…so Obama’s ending his presidency pretty much as he began.

Disgusting and enraging. What a perfect coda for the Obamic Decline.

Disgusting and enraging but not surprising. That limp wrist pic will be his legacy.

Love the picture of the giant mural with the murderous Che and our president.

I will confine my comments to the imagery, and not the policy of normalizing relations with an oppressive regime.

I can cut him slack on the limp wrist video clip. It was a spontaneous thing that lasted a second and he can’t control Castro.

But he can control whether he wants to pose in front of an image of a homicidal maniac. The press has complained about a lack of access for their photographers during his entire presidency. A couple of years ago it came to a head when journalists decided to put pressure on the White House and report about the lack of access their photographers were getting at the White House. Instead, the government paid White House photographer was snapping photos of Obama in very controlled situations and publishing them on social media. That way they could control the image of the president the public sees. Which is really just propaganda. It’s no different from Putin publishing images of himself wrestling a bear or riding a horse without his shirt. It’s how each government wants you to see its leader.

Yet, despite all of the unprecedented control he and his staff have exercised over tightly controlling his image, he decides it is a good idea to have his photo taken in front of an image of a murderous revolutionary terrorist. I don’t think it is an accident. It’s hard to believe he and his staff did not understand the significance of the image. They WANTED Che’s image in the background.

I can’t cut him slack on the arm thing. His arm was grabbed in an aggressive manner and he immediately went limp and passive. It seems the only people in the world he’s willing to stand up against is American citizens.

Seeing the limp wrist of oabama being held aloft by the slimy Raoul reminds me of a hunter holding up his kill.

And that’s exactly what it is.

T-rump said yesterday that Obama should have turned Air Force One around when it was apparent that Castro was dissing him.

Cruz would NEVER have done ANYTHING that Obama has done vis Cuber.

Really, what else could you expect from Pres. Mom-Jeans? Honestly. What a sissy.

Yep. The mom jeans or Obama riding his girlie bike or bowing before one head of state after another when he was on his apology tour. Perfectly captures what he has down to America’s image and standing in the world. But such will be lost on his cult following. The people who matter – and our enemies – understand the significance of this visual. America is ripe for the taking.

Yeah, I thought about mentioning Urkel and his girly bike, too. Glad you did.

Obama, as usually, is being played.
Think back … 2011.
Alan Gross was being held prisoner by the Cuban regime. They invited Bill Richardson to negotiate. The idiot went over there thinking he was going to make history.
He came back humiliated.
He was not even allowed to see Alan Gross.

That’s what raul castro is getting again. He is humiliating Obama in order to create a perception of strength. Not receiving him at the airport, that was calculated.
No changes have been agreed or promised on the side of the regime, and none will be agreed in the future.

He is making history. So did Gen. Custer.

I love the picture of Putin riding bare chested on a stallion he undoubtedly caught and broke himself contrasted with Obama riding the bike with the helmet.

Also contrast him in the sequence where he hides behind Michelle when he’s watching judo and Putin practicing take downs and throws.

Makes us look like a laughing stock. Cruz or Trump whoever replaces Obama will look more like a man.

America needs a wrist splint after 7 years of this douche-commie.