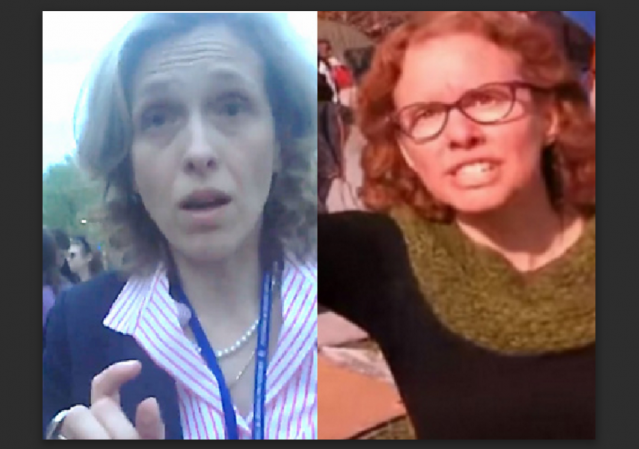 She’s not redheaded, and she didn’t demand some “muscle” to help her out.

But this American University official (not clear if administrator or Prof., or both) decided to play the role of Melissa Click, threatening to call the police on Washington Examiner reporter Ashe Schow and others who were covering the progressive outrage over the appearance of Breitbart’s Milo Yiannopoulos.

Here is the Melissa Click of American University. We have much much more footage too. pic.twitter.com/C8cLY9U6Da

The Washington Examiner’s Ashe Schow was at AU last night reporting on Breitbart tech editor Milo Yiannopolous’ visit to campus. (Schow tells me she was there on behalf of a forthcoming documentary, Thought Police, and was not representing The Examiner.) Yiannopoulos is a deliberately controversial figure, and his presence on campus prompted a student protest.

A female faculty member—now dubbed Melissa Click 2.0–tried to interfere, telling Schow and her camera crew that they were required to accompany her inside. They had to follow “certain regulations that the university is guided by” because AU is providing “a safe space for everybody who works or studies on this campus,” she claimed.

After the faculty member realized Schow’s group was recording her, she became hostile. “Are you kidding me?” she asked. “Seriously, I’m calling the police.”

The police didn’t immediately respond to her call. Later, when the cops did appear, the faculty member expected them to escort the journalists off campus. Instead, they wanted to have a chat with the faculty member, according to Breitbart News.

“The police came over and she thought they were going to save her but actually they escorted HER away,” Schow wrote on Twitter.

Lol the police came over and she thought they were going to save her but actually they escorted HER away https://t.co/eA1i1q1Her

Much to the disappointment of the progressives, the event took place anyway:

As Yiannopoulos began speaking, he explained that he would donate $20 to Donald J. Trump every time he’s interrupted.

Within the first minute, a protester with a sign stood up and was promptly removed by campus police. The sign read “Roses are red, violets are blue, Milo we’re too woke [sic] to tolerate you.”

As the protester was removed, Stephanie Black stood up at her seat with a sign that read “Hate Speech ≠ Free Speech.” She remained in place in silent protest for the entire event.

“I am all for free speech. I am. But there is an enormous difference between free speech and hate speech, and hate speech was only what Milo had to offer,” Black later told News2Share. “So I stood there, for nearly two hours, to show that his hateful rhetoric was not welcome on my campus and that I stand in solidarity with everyone whom he directed his hate to.”

As the Q&A came to a close, one man went to the microphone and asked, “How do you equate the Black Lives Matter movement with black supremacy?” Yiannopoulos supporters began yelling “Trump!” and “Black privilege!” as a shouting match ensued among various wings of the audience.

Do NOT mess with Ashe Schow. She will devour you, and mock your bones.

Before any blind, deaf, mute and autistic child with ADHD and dyslexia gets treatment, we must first see to it that the overlooked and neglected First Amendment learning disabilities of progressive college professors and administrators get the attention and treatment they deserve.

Great photo. She shouldn’t be hard to identify.

LOL, I wonder how long it took her to get her self under control when the realized the cops were going to make her leave?

What is truly disturbing is that this wasn’t just a threat.

This liberal piece of shit actually called the police EXPECTING that they would enforce this ‘safe space’ bullshit.

That is truly terrifying to me.

Don’t get too het up. Idiots call 9-11 when Micky D’s gets their order wrong.

These people live in the Ivory Tower. Because they’re never subjected to competing ideas, they become detached and freakish. It’s like the Galapagos Islands for thought.

We need to push a new meme: liberal privilege.

Here’s a guy who gets it.

No more hell raising. It hasn’t accomplished anything of value.

It is time for the Kingdom of God on earth to come forth.

Everyone grow a pair of cojones and publish her name.

Why would she call the police? That’s what the Campus Police are for.

As far as I am concerned the police came and did what they should have done.

Let me see if I understand this liberal “thinking” that is on display.

Milo’s speech is “hate speech” per the protester who is aggressively acting out hate for Milo.

But, the intolerant protester’s hate-filled speech is not hate speech–do I have this right?

Ah, because of Liberal Privilege!

In thinking through this, “Who’s On First” comes to mind.

The privileges of academia are a relic of a bygone era. They should be dispensed with, and the members of the academy forced to join the rest of us in modernity.

I wonder if Prof. Jacobson could comment on the First Amendment vs. private institution clash here. If this lady were actually authorized to act for AU, would she not have had a lawful right to exclude a reporter from campus? Without invitation and having been asked to leave, would the reporter not have been a trespasser?

(Please don’t anyone mistake that I believe it would be righteous, I’m just asking the question.)

Those libaturds should all link arms and go search for landmines somewhere.

To the contrary. I’m married to someone who works in academia. She has to endure all of this bigotry behind closed doors.

There have been times when her direct manager has singled out her politics and ridiculed it in staff meetings.

Even if one were to accept this as a potentially valid distinction, one must wonder whether she ever get to the point where she considers WHO gets to decide which is which?

I understand, she emotes. But is it too much to expect an academic to also think?