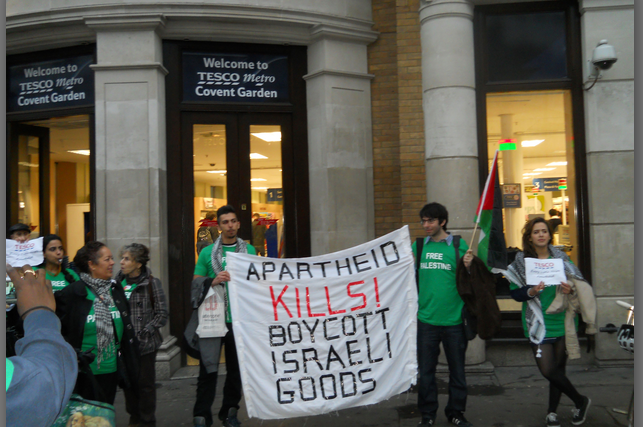 The annual tour of lies and hate known as Israel Apartheid Week kicked off Monday in England, with stops coming around the world.  The U.S. edition is set for March 27-April 3.

Monday morning, Londoners taking the underground were greeted by a series of new advertisements targeting companies with business in Israel.  They accuse Israel of the same tired litany of apartheid, cruelty and crimes that has been debunked so many times already.

The first event at the University of London’s School of Oriental and African Studies last Monday night included the usual accusations of prisoner abuse, organ harvesting and, of course, apartheid.

According to the inimitable Melanie Phillips:

“Whether it be,” [Chalmers] wrote, “members of the executive throwing around the term ‘Zio’ (a term for Jews usually confined to websites run by the Ku Klux Klan) with casual abandon, senior members of the club expressing their ‘solidarity’ with Hamas and explicitly defending their tactics of indiscriminately murdering civilians, or a former co-chair claiming that ‘most accusations of anti-Semitism are just the Zionists crying wolf,’ a large proportion of both OULC and the student Left in Oxford more generally have some kind of problem with Jews.”

A further statement from the Oxford University Jewish Society said senior members of the Labor Club liked to regale listeners with a song called “Rockets over Tel Aviv” and endorsed Hamas attacks on Israeli civilians, stated all Jews should be required to denounce Zionism and the State of Israel, and said those who refused to do so should be shunned. And they had arranged for a group of students to harass a Jewish student and shout “Filthy Zionist” at her.

We are horrified at and whole-heartedly condemn anti-Semitic behaviour in all its forms. The comments detailed in JSoc’s statement last night indicate a shocking pattern of hateful and racist behaviour by some Club members, and it’s of the highest priority that this be dealt with swiftly and lastingly. Labour Students is launching an investigation; we will fully co-operate with this and encourage any of our members to come forward with any information that will assist the process. We will not be giving a running commentary on the investigation, any further updates will be made when appropriate, in due course.

Despite their horror and whole-hearted condemnation of anti-Semitism, OULC is still sponsoring Israel Apartheid Week.  The Tower reports:

In a statement released expressing her regret over Chalmers’ resignation, Noni Csogor, the remaining chair of the OULC, defended the decision to support Israel Apartheid Week “as part of the club’s historic opposition to “racism and oppression in all its forms,” while at the same time noting that it is “horrifying that Jewish students feel unsafe on campuses.” When Aslan-Levy asked how she could deplore the intimidation of Jewish students while endorsing an event that often does just that, Csogor responded that the closeness of the vote to support Israel Apartheid Week showed that “the safety and comfort of Jewish students was a compelling consideration.”

In the wake of Chalmers’ resignation, other students have spoken out as well.  According to a Times Of Israel report:

– One club member was formally disciplined by their college for organising a group of students to harass a Jewish student and shout ‘filthy Zionist’ whenever they saw her.

– Several committee members have been known to sing a song called “Rockets over Tel Aviv” and have expressed support for Hamas’s use of indiscriminate attacks against Israelis;

– Another has argued that it is not anti-Semitic to allege the existence of an “international Jewish conspiracy” or “New York-Tel Aviv axis” that allegedly rigs elections. Others have alleged that US foreign policy is under the control of a “Zionist Lobby”; when asked whether by “Zionist” they meant “Jewish,” these students are reported to have gone “very silent”;

– One committee member has stated that all Jews should be expected to publicly denounce Zionism and Israel, and that one should not associate with those who fail to do so;

– In a discussion on the OULC Facebook group, one member argued in favour of Hamas’s policy of killing Jewish civilians and even claimed that all Jews constituted legitimate targets. Two former co-chairs, among others, defended the member as making “a legitimate point clumsily expressed”.

Now, the British government has stepped in.  According to the Telegraph, “Oxford University was yesterday ordered by the Government to investigate allegations of widespread anti-Semitism as it was engulfed by new claims that students were escaping punishment for racist attacks.”

The devil’s in the details, though.  Even the good news that the government will investigate apparently rampant anti-Semitism on UK campuses has strings attached.  Former OULC member and leader of the national Labor Party Ed Miliband called for current Labor leader Jeremy Corbyn to “personally look into” issues at OULC.

Corbyn, in turn, is very much part of the problem.  He calls Hamas “friends” and has met with leaders from both Hamas and Hezbollah.  In September he spoke to the Labor Friends of Israel and refused to actually say the word “Israel.”  Corbyn’s website still peddles the malicious lie that “Israel must lift the ongoing siege of Gaza.”  The idea of Corbyn investigating anti-Semitism by a Labor-ite is insulting.

The Conservative government is also taking steps to curtail anti-Semitism sprouting in bigoted localities.  As Legal Insurrection noted in December:

the Department for Communities and Local Government announced that it would instruct local governments that their policies must be consistent with the national government’s foreign policy.

According to The Independent: A Department of Communities and Local Government (DCLG) spokesman said: “Councils should not be using pensions and procurement policies to pursue their own boycotts and sanctions against foreign nations. We are tightening up the rules to ensure taxpayers’ and the UK’s interests are protected.”

The forthcoming regulatory changes are expected to “make clear to authorities that in formulating these policies their predominant concern should be the pursuit of a financial return on their investments… They should not pursue policies which run contrary to UK foreign policy.”

Melanie Phillips added in her article in the Jerusalem Post:

The guidance aims at preventing publicly funded bodies such as municipal councils or National Health Service trusts from boycotting goods produced by what they believe to be “unethical companies,” such as firms involved in arms trading, fossil fuels or tobacco products as well as companies based in Israel.

Matthew Hancock, the British government’s Cabinet Office minister, revealed the development on a visit to Israel this week. Such boycotts, he said, were divisive, potentially damaging to the UK’s relationship with Israel and risked fueling anti-Semitism.

The enemies of Israel are beside themselves in fury.

The British Labor Party has called the guidance an “attack on democracy.” NGOs in the forefront of anti-Israel activism, such as Amnesty, War on Want and the Palestine Solidarity Campaign, have called it a “gross attack” on democratic freedoms and the ability of councils or other public bodies to make “ethical investments.” . . .

Apartheid in South Africa was a real and demonstrable evil. When Jews hear that BDS against Israel is modeled on the anti-apartheid campaign, the comparison turns their blood to ice.

That’s because accusing Israel of apartheid is a wicked and manipulative lie deployed as a weapon of war by Israel’s enemies to portray it as a rogue state which needs to be eliminated. BDS thus makes its Western proponents complicit in the attempt to destroy the only state in the Middle East which actually upholds human rights, and whose only crime is to exist at all as the homeland of the Jewish people.

Is The Government Doing Enough?

While the Conservative government’s efforts are welcome, it’s treats a symptom, not the disease.  Support for BDS reflects ignorance of the underlying issue – Israel is confronted by a same genocidal enemy the inculcates children to murder.  Defeating BDS requires exposing its lies and false doctrine.

The British government, even the Conservatives, accept too many of those lies as truths.  As Phillips noted in her article last week:

Preventing BDS will not stamp out this deranged animosity against Israel and Zionism that has now gripped most of the Labor Party and Britain’s “progressive” intelligentsia.

Indeed, the new guidance may provide a fig leaf for the derangement to continue. The British government can pose as a champion of Israel against delegitimization.

But that very same British government continues to propound one of the key lies fueling Israel delegitimization: that its “occupation” and settlement of the disputed territories is illegal.

If David Cameron really wants to tackle anti-Israel incitement, he should be telling the British public some inconvenient truths – such as that the occupation and the settlements are legal several times over; that in the entire Middle East it is only Israel that upholds human rights for Arabs along with all its other citizens; that no decent person should support the Palestinian agenda of anti-Israel incitement, Jewish ethnic cleansing and the destruction of Israel; and that NGOs such as Amnesty and War on Want are a disgrace for doing so.

Alas, he will not do this. Although he has moved sharply in the right direction over Israel, he hasn’t yet joined up the dots. Or maybe he has, but isn’t brave enough to show his country the completed picture.

The bottom line is that both major parties in England accept the same basic, false premise that Israel is the problem, and Israel must find a solution, up to and including surrender.  Cameron’s Conservatives concedes Israel should not be shunned.  Corbyn’s Labor thinks Israel fundamentally illegitimate.

With leadership that cozies up to terrorists bent on annihilating Jews, it is no surprise that the Apartheid slur endures, and that students are exposed to and believe, for instance, that Israel harvests organs.

Just take a close look at the people in the demonstration and what do you see? Why you see Arabs/muslims! They always make up the crowd at any anti Israel event. Surprised? No me neither.

The UK’s Thought Police will only prosecute you if you say something offensive to Muslims.

Being a vile, hate-filled, Anti-Semite and broadcasting your beliefs is perfectly fine with them.

Don’t know if you are aware that Britain has been known as “Perfidious Albion” by many Jews.
Just looking back at Britain’s actions throughout the 20th century against Jews and Israel one can see the reason.