“This is a historic victory” 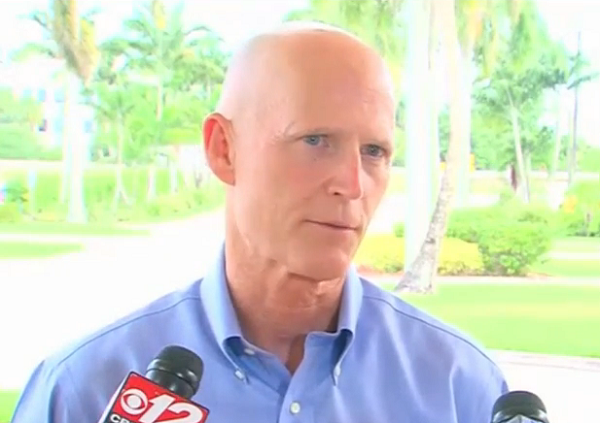 With demand down and red states limiting the amount of taxpayer monies going to fund abortion, abortion clinics are closing across the country.  Friday, Florida became another state to cut abortion funding when Governor Rick Scott signed into law a bill that would cut state funding to clinics that perform abortion.

Planned Parenthood and other health clinics that provide abortions in Florida will go without taxpayer funds and face increased regulations for the procedure, under a bill signed Friday by Gov. Rick Scott.

. . . . The law, which takes effect July 1, requires doctors performing abortions to have admitting privileges at a nearby hospital, requires annual licensure inspections for clinics and bans the purchase, sell or transfer of fetal remains. The law upgrades the failure to properly dispose of fetal tissue from a second-degree misdemeanor to a first-degree misdemeanor.

Needless to say, there is much disagreement about this new law.

Scott did not say why he signed HB 1411, which he approved with 67 other bills. But the flood of statements from pro-choice and anti-abortion groups reflected the sharp divide over the issue.

“As a result of this bill, thousands of people across Florida may no longer be able to access essential reproductive health care, such as cancer screenings, birth control, and well-woman exams,” said Cecile Richards, president of Planned Parenthood. “This cruel bill is designed to rip health care away from those most at risk.’’

“This is a historic victory, and we are thrilled to have been an active part of this effort,” Stemberger said.

Again from the Orlando Sentinel:

Scott ordered his health agency to investigate all Planned Parenthood clinics in Florida, but Stemberger said he could go further by banning the clinics from receiving federal Medicaid funds.

Scott’s investigation didn’t find any sale of fetal tissue, but it did cite three clinics for performing abortions after the first trimester. Planned Parenthood disputed those allegations, and the case is still pending in court. A separate criminal investigation prompted by House Republicans turned up nothing.

The new law attempts to clarify that issue by defining the first trimester as 11 whole weeks after fertilization.

Florida joins at least eight other states that have defunded abortion clinics like Planned Parenthood following the release of the appalling “baby parts” videos.

Keep tightening the noose on these barbarians.

Perhaps the candidate who loves loves loves Planned Parenthood will make up the lost dollars. What say you, tRumper?

Well, the anti-lifers (theoretically) ought to love this legislation, since they wholeheartedly preach regulation in all other aspects of human existence. Put up or shut up, progs ~

And how is that constitutional amendment to BAN ABORTION going? Havn’t heard anything in the news about it lately. And when is the busybody society going to require church attendance? I mean you won’t have the serfs believing in hellfire and brimstone unless you keep preaching it. You know, TAX them if they don’t go to the state mandated religious superstition center.

If it’s illegal, drop the grandstanding and do something effective to stop it. If it’s legal, knock off the pettifogging and leave it alone.

Except the right to bear arms is guaranteed in the 2A, despite the bloviating of busybody pols. There is no Constitutional right to an abortion, no matter how many umbras and penumbras you dig through.

Nice try, but no cigar ~

Yah, just like the Constitution sez, there are ONLY 8 “rights”. The 9th and 10th amendments are meaningless.

Nope, the 9th and 10th Amendments do not provide sanction for murder. Keep on digging around in those penumbras ~

Eventually, people will have to acknowledge that there is life before birth, and then civilized society can begin to reconcile individual dignity and intrinsic value with natural imperatives. Unfortunately, that day is not today, but a growing and maturing consensus is an indication of positive progress.

Despite being a relatively rare event, pro-“choice” advocates declare the health of the mother, who would face severe issues from pregnancy complications, as a primary reason to ensure abortion on demand access. However, when laws are proposed that would require physicians to have hospital privileges at a near by hospital or that demand abortion clinics meet the same requirements that outpatient surgery facilities must obey, these pro-“choice” advocates become apoplectic. It seems that, according o these pro-“choice” advocates, these women obtaining abortions have no health issues that would warrant these precautionary measures.
>
Is anyone else becoming exhausted by the pretzel logic, hypocrisy, and plain old fashion idiocy of those arguments the Left constantly uses to justify that which cannot be justified? Is anyone else getting fed up by the masses who blindly follow and repeat these absurd arguments while acting so intellectually superior to everyone else?
>
I am nearly at the point of automatically failing any freshman student who tells me, their Chemistry professor, that I, because I do not support their ignorant global warming hysteria, am so completely stupid and that they know so much more than I do.