“A lot of us will never trust tap water again” 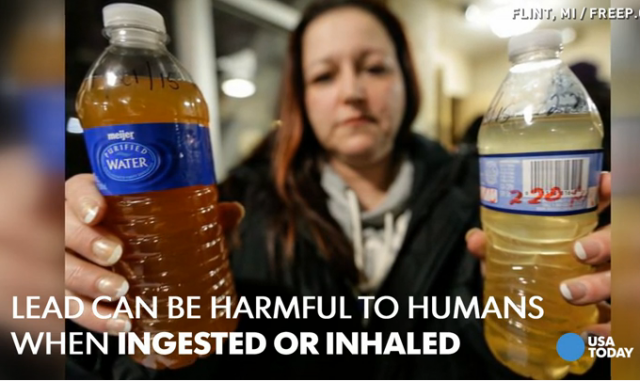 Walters is now filing a lawsuit against government officials and corporate entities, whose bureaucratic bungling and lack of response led to the crisis.

The Flint mother who told federal lawmakers her house was “ground zero” for lead-contaminated water has filed a lawsuit against those she says are responsible for poisoning her children.

Walters claims her four children have been exposed to extremely high levels of lead and have experienced brain development injuries, cognitive deficits and other problems.

“It’s time for the kids to be heard,” Walters’ attorney, Corey Stern said. “With so much talk among officials, heads of corporations, and the media, the reality of what happened to these children – and how it will affect each of them for the rest of their lives – has been drowned out in the noise.”

She is not the only one lawyering-up, either. Michigan Gov. Rick Snyder has just hired two outside lawyers at state expense to assist with civil representation and to trough a myriad of records connected to Flint’s lead-tainted water crisis.

New analysis that addresses the infrastructure problems that are key contributors to this mess estimates that it will cost over $300 billion to fix the lines in Flint and elsewhere in the country.

More than 6 million lead service lines exist across the country, according to estimates cited by Fitch. Many of these are located in the Northeast, Midwest and older urban areas.

“We believe the capital costs to replace these lines could exceed $275 billion,” Fitch said.

The EPA’s latest survey estimated the entire sector needs $385 billion in water infrastructure improvements through 2030, and this estimate includes the costs to only partially replace lead pipes, according to the rating agency.

In conclusion, while politicians have been racing to spend money on social and diversity programs, infrastructure issues that are critical to public health and safety has been neglected. This neglect will have profound consequences during the 2016 election and beyond.

“A lot of us will never trust tap water again,” [Flint resident Desiree] Duell said in a recent phone interview. “We have PTSD from it.”

Going no place. Sovereign immunity. The feds will use the feds’ tactic: “These are federal employees and there’s not a G.D. thing you can do about it, so screw you.”
Applies equally to the IRS, EPA, VA,ATF….
If the water were provided by a private corporation, their liability insurer would be all over the thing from day one. Testing, checking lines, raising premiums if the company didn’t comply….

The government is routinely sued through the device of naming a government official for actions done in office.

Valerie. I suppose anybody can be sued. Point is,to what end? Is Lois Lerner bankrupt due to a settlement with conservative groups? Anybody from the EPA going to have to borrow money for a lawsuit resulting from that mine disaster?
Are there flocks of bankrupt prosecutors successfully sued for withholding exculpatory evidence?
I hardly need to mention the VA.
If our tanks were armored as well as the feds’ employees, we’d need only one for each continent.
If we didn’t have a republican someplace in the mix, this would have gone noplace.
I was surprised, watching the hearings, to find older congresspersons remarking that DC had been that bad not so many years ago.

The question was whether sovereign immunity keeps the government from being sued. As a practical matter, the answer is no. What you do is name the official, not the government.

Do you know who the Wade was in Roe v. Wade? It was Henry Wade, District Attorney of Dallas County.

Do you know who settled (paid for) the sexual harassment lawsuit filed agains former mayor Bob Filner? That would be the City of San Diego.

Do you know that the US Supreme Court allowed a private civil lawsuit against a sitting President of the United States? That was Jones v. Clinton.

Do you know what governor got sued for threatening to use a veto, and then using it? That was the felony (!) prosecution of Rick Perry, and it went all the way to the top court in the state before it finally got dismissed.

US case law is replete with lawsuits against officials in the government, at all levels, for both their private and their official behavior.

Whether a lawsuit is the most effective remedy, and whether a potential plaintiff has the money to vindicate a right in court, are separate questions.

You’re looking at rust in the water. This comes from the walls of the water mains in the streets. It should not be happening, and it is indicative of a major failure at the water treatment plant. Under the USEPA’s Lead and Copper Rule, water utilities are required to produce a slightly hard, alkaline water that deposits scale throughout the system, and most especially on the older lead service connections still in use and on the copper with tin/lead solder in the houses. The utility is plainly not doing this.

As to liability, the first in line is the water treatment plant superintendent, who by law is responsible for meeting all the various federal and state regulations. This is a no excuses liability, and the superintendent will almost certainly lose his operator’s license.

Next up is the City of Flint as a corporation. That’s probably the end of the line.

Does pervasive lead contamination help explain the all the violence and dysfunction in our cities?

There are those who have drawn the correlation between the reduction of lead in gasoline and the long-term reduction of crime.

Well, after all the federal power grabs to form an unconstitutional central gov while suppressing the 10th amendment, the feds messed up big time. There was a certain genius to having local stuff run by locals. Instead, the one party rule of a state combined with inept federal employees and one has the crisis in Flint. Get ready for more things to break down.

“while politicians have been racing to spend money on social and diversity programs, infrastructure issues that are critical to public health and safety has been neglected.”

Excellent summary which could also describe the entire modern Democratic platform. Another example is UC Berkeley’s cost cutting proposal to dissolve the College of Chemistry. Of all the crap degrees the university offers – LGBT, African-American, social welfare, Peace and Conflict, gender/women, medieval – it is chemistry on the cutting board as a cost saving measure.

The lead levels we are talking about are very low by historical standards. This is mass hysteria and straining at gnats. That said this is a failure by government employees managed by an elected local government. This was not a crisis at either the state or federal levels.

As far as the national lead problem is concerned, it is easily managed by controlling water quality coming into the water distribution system. The long range solution is conversion to plastic pipe for potable water.

There are apparently some quite good in-situ lining systems available, too.

Let’s see. $275B divided by 6M service lines = $45,833 per service line. Sounds like somebody has finally discovered a way to turn lead into gold.

Q: What do you call someone who works for the department of water in Flint, Michigan?

27 ppb of lead is quite low. Even the 5ppb the EPA says cause for concern, is absurdly low. To use an example, in a clean room in a semi-conductor plant, where people are wearing Tyvek suits and their faces covered, the acceptable level of lead is 2 ppb. PPB is PARTS PER BILLION. The brown water is most likely from rusty pipes – and can be solved with a common water filter. Lead Oxides are red and yellow (think the ochres of ancient paints).