Times have changed, now “Zionism is Racism” is accepted on campus. 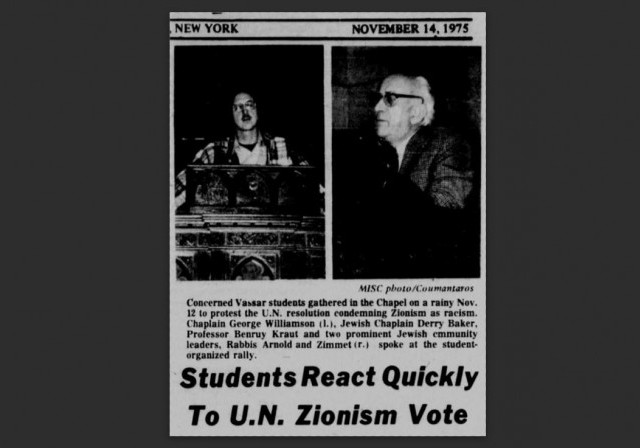 For years the BDS campaign on campus has been punctuated by crude and misleading accusations against Israel, and an implicit and sometimes explicit argument that Zionism is inherently racist. Overt anti-Semitism rears its head from time to time.

In researching Vassar’s history, I came upon an interesting historical contrast with the current situation.

In November 1975, the U.N. General Assembly passed the notorious (and now rescinded) “Zionism is Racism” Resolution. Then U.S. UN Ambassador Daniel Moynihan spoke eloquently in rebuttal of spoke of the “infamous” Zionism is Racism act.

But such claim is now standard fare at Vassar, and other campuses.

Celebrating terrorists, and openly parroting the disgraced U.N. resolution is part of the rhetoric. 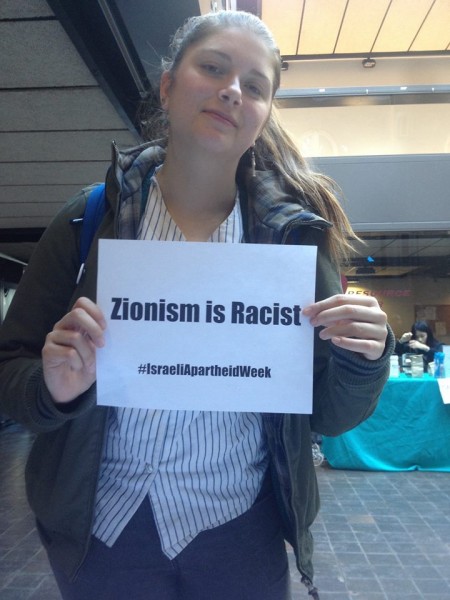 The “Zionism is Racism” resolution was a watershed moment in many ways. The Jew hatred of the Holocaust worked its way into the organization supposedly founded, in part, to prevent another world war and genocide. The hatred was fueled by Islamic and Marxist countries.

In 1974, Vassar students reacted quickly in condemning the resolution, as this article from the Miscellany News on November 14, 1975 reflects [see also Featured Image]:

Reaction swept across campus this week in the wake of Monday’s United Nations resolution
declaring Zionism “a form of racism.”

The Famine Relief Committee froze all funds destined tor the United Nations International
Children’s Emergency Fund (UNICEE) until a vote can be taken on the matter by the committee members. The action became effective at 2 p.m. Wednesday on the suggestion of senate chairperson Ellen Dickstein and Vassar Chaplain George Williamson Jr. The Thursday Evening Skipped Meal and other committee activities were not affected. Money collected prior to a vote of the membership will be held in the committee’s college account subject to the outcome.

(The student senate voted 24-7 to go on record against the U.N. decision….)

An Editorial in the student newspaper not only condemned the U.N. Resolution, it characterized the claim that Zionism is Racism as anti-Semitic:

The simple-minded ratification of Arab-inspired, anti-Israel strategy demonstrated by the U.N. General Assembly vote on Monday denouncing Zionism displaysa sad lack of imaginationby
world leaders toward combatting the real instances of discrimination, racism and emotional animosity in our international society….

But by so broadly and categorically equating all forms of Zionism with racism, only the racist emotion of anti-Semitism appears to have been the vote’s primary motivation. 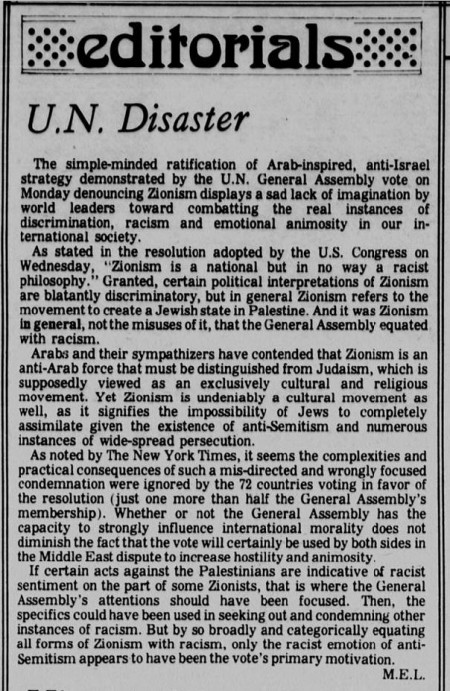 How did we get from the principled stand that claiming Zionism is Racism was anti-Semitic to a position on campus where that claim is largely accepted and used as a propaganda point by groups like SJP?

The student newspaper does not provide a complete history, but there was a hint in a Letter to the Editor in April 1976 – the faculty and leftist ideology:

At the faculty forum on Zionism and anti-Semitism (Monday, April 5) several members of the audience and one panel participant made some interesting assaults on Zionism. These proponents of anti-Zionism tried to show how Zionism was a corrupt ideology. The reasons they gave to back up their arguments were rather superficial and portrayed a skewed view of the actual situation in Israel. By rationalizing their distrust in Zionism, these anti-Zionuts could comfortably reassure themselves in their liberalism and third world sympathies…. 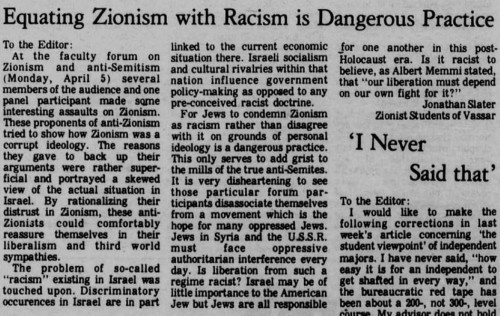 This is just a snapshot in history, but it’s one that is telling.

When asked in an interview why campuses are the way they are, I focused on the faculty:

KF: Why is today’s college campus so fertile for the BDS movement?

WJ: The faculty. The faculty. The faculty. Particularly in the humanities and social sciences, where Israel regularly is portrayed as an illegitimate “settler colonial state,” without any recognition of the historical connection and rights of the Jewish people, rights that have been recognized in international law since the League of Nations in the early 1920s. On many, if not most, campuses where there is substantial anti-Israel activity, faculty members are the motivating force and provide continuity. Faculty also indoctrinates students into viewing Israel as the pure oppressor and Palestinians as the pure victims, without any fair historical account of the conflict.

That is the current situation at Vassar, and it’s one that was a generation in the making.

Faculty set the example and lead the way: 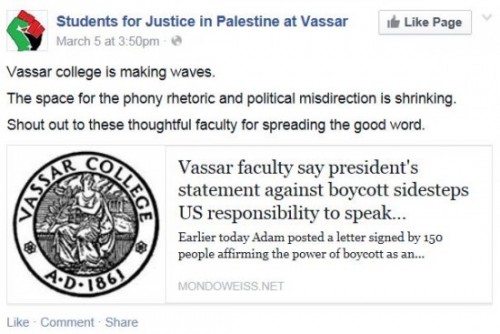 They use their departmental authority and power over students to set the campus anti-Israel agenda.

What you are seeing play out among students is a symptom.

In ’75, the Holocaust was a living memory.

A lot of the kids today have no knowledge of it. They DO have some knowledge of the latest Pallywood propaganda vid they saw, or the latest liar they listened to from their faculty.

It isn’t JUST what they don’t know…it’s also what they DO know that’s just plain false.

And, in ’75, the six day war, the horrific killing of the Israeli Olympic athletes and the Yum Kippur war were still a fresh and haunting memory soon to be followed up by the raid on Entebee the next year.

We need to teach our children not just about the Holocaust, but about that more recent history too so they don’t fall victim to BDS.

Zionism is, essentially, that practitioners of Judaism, by some right, have undisputable claim of ownership of what we now call Isreal.

While racism might be technically incorrect, Zionism is wholly discriminatory against anyone who does not practice Judaism. Label that however you wish.

And if we were to apply these 2,000 year old territorial claims based on religion, I am quite sure we would have to turn over all of New York to tribes of people who no longer exist.

Literally taking the bread out of the mouth of Israeli children and giving them the choice of starving or letting murderers slit the throats of their children so you can virtue signal and posture for your liberal friends is not only hypocrisy but cynicism of the highest order.