Daniel Patrick Moynihan: “A great evil has been loosed against the world” 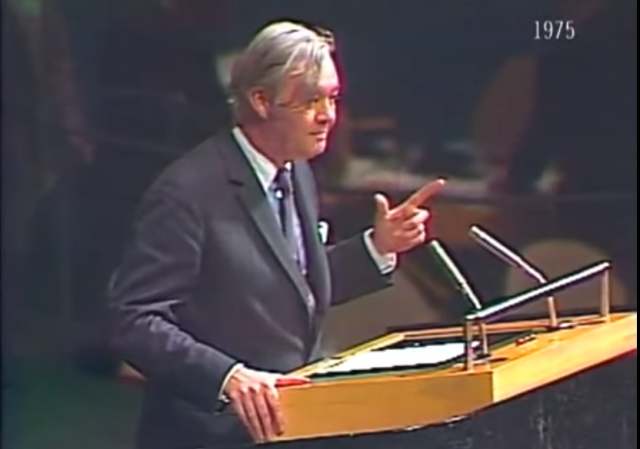 The Resolution was revoked in 1991, but the theme remains the same among those who want to destroy Israel.

You can attend just about any Boycott Divestment and Sanctions rally, “Jewish Voice for Peace” protest, “Campaign to End the Occupation” conference, and you will here vile rhetoric similar to that of Resolution 3379. You’ll also hear it at some faculty associations where BDS resolutions have passed, such as the American Studies Association, and other associations where it is under consideration, such as the American Anthropological Association.

“Zionism is Racism” in words or concept is the rallying cry of Students for Justice in Palestine and a host of other anti-Israel campus groups, as well.

So it’s worth considering the words of Daniel Patrick Moynihan in opposition to that Resolution, which we covered before in my December 15, 2013 post, American Studies Association about to pass odious equivalent of Zionism is Racism resolution.

Here is an excerpt from his speech could just as easily be given today, tomorrow or any other day:

The speech by Israel’s Representative to the U.N., Chaim Herzog, also is worth reading: 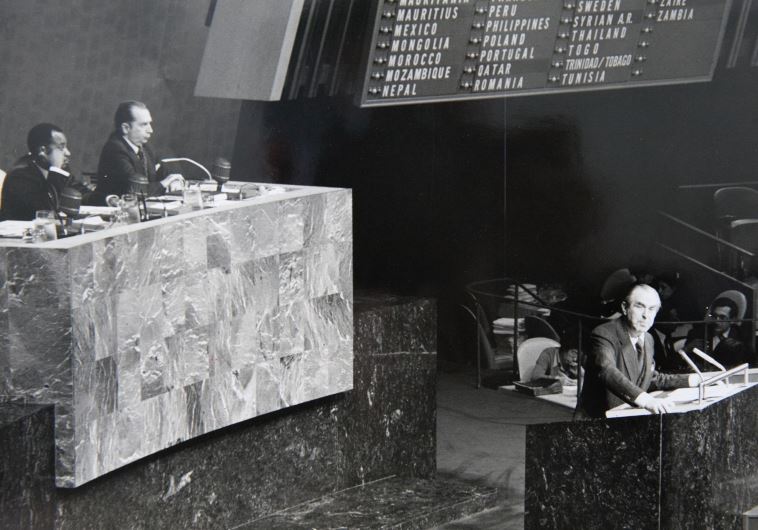 I do not come to this rostrum to defend the moral and historical values of the Jewish people. They do not need to be defended. They speak for themselves.

They have given to mankind much of what is great and eternal. They have done for the spirit of man more than can readily be appreciated by a forum such as this one.

I come here to denounce the two great evils which menace society in general and a society of nations in particular. These two evils are hatred and ignorance.

These two evils are the motivating force behind the proponents of this resolution and their supporters….

Zionism is the name of the national movement of the Jewish people and is the modern expression of the ancient Jewish heritage. The Zionist ideal, as set out in the Bible, has been, and is, an integral part of the Jewish religion.

Zionism is to the Jewish people what the liberation movements of Africa and Asia have been to their own people.

Zionism is one of the most dynamic and vibrant national movements in human history. Historically it is based on a unqiue and unbroken connection, extending some 4,000 years, between the People of the Book and the Land of the Bible….

I stand here not as a supplicant. Vote as your moral conscience dictates to you. For the issue is neither Israel nor Zionism. The issue is the continued existence of this organization, which has been dragged to its lowest point of discredit by a coalition of despots and racists.

The vote of each delegation will record in history its country’s stand on anti-Semitic racism and anti-Judaism. You yourselves bear the responsibility for your stand before history, for as such will you be viewed in history. We, the Jewish people, will not forget.

For us, the Jewish people, this is but a passing episode in a rich and event-filled history. We put our trust in our Providence, in our faith and beliefs, in our time-hallowed tradition, in our striving for social advance and human values, and in our people wherever they may be. For us, the Jewish people, this resolution based on hatred, falsehood and arrogance, is devoid of any moral or legal value.

I can well remember that time, back when there were such things as principled Democrats, before they simply became Collectivists.

Daniel Patrick Moynihan was one. He saw reality, and he said true things.

He would spit on what we have for “leadership” today, both in foreign and domestic policy.

Moynihan was a man with foresight, but he was a drunk who disregarded the needs of constituents. He would have been right there along with the pack. Wasn’t he one of those, if I recall rightly, in the Hildabeest’s corner? NYS had two senators: Moynihan and D’Amato. D’Amato was the one with integrity. I know this because I became a citizen because of Senator D’Amato’s diligenct assistance and the integrity he had to seek the welfare of those who had hired him. If I’d asked Moynihan for help, I would’ve still been waiting.

Two great men, during a time which planted the seeds of today’s flourishing, poisonous vine – both in the leftist push to destroy “Zionists” Israel and America, and in the societal mores that the Billy Ayers/SDS/anti-establishment radical communists cling to, preach, and act out – using rose-colord, romantic myths to seduce the children and emerging young leaders.

The main difference I see between then and now is the societal moral decay that leaves people rudderless, void of any moral center, which allows such hatred to grow unabated.

Lord, protect Your people, Israel, and all Jews everywhere, from this enemy who seeks to destroy, to devour. Amen.