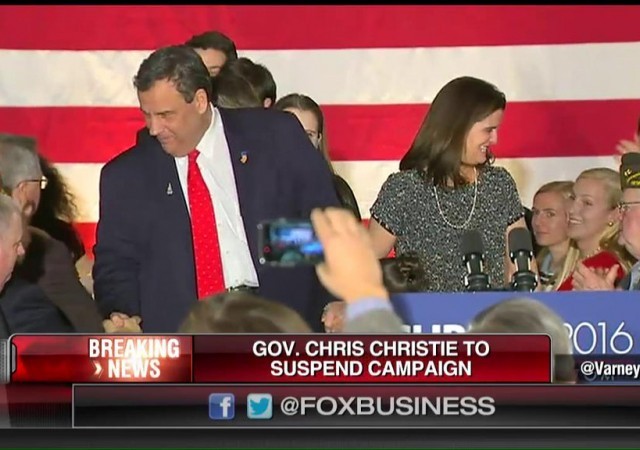 Having committed campaign murder/suicide in the last debate by berating Marco Rubio (who deserves his own blame for not properly defending himself), there was not much left for Christie to do after his 5th place finish in New Hampshire. 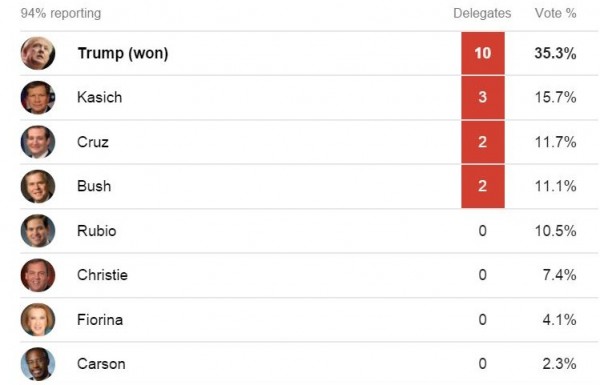 Christie dropping out is not unexpected — the readers put him near the top of those expected to suspend their campaigns. Who will be next? 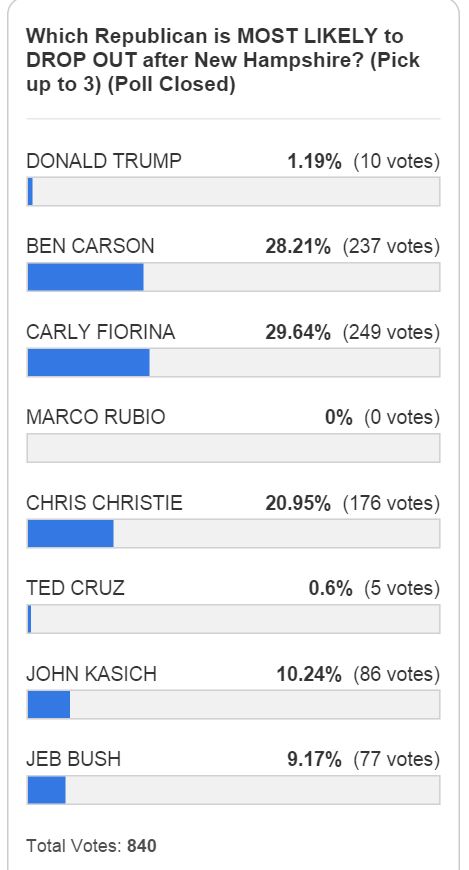 I think this is a fair assessment not only of Christie’s current campaign, but of his political persona:

Another vanity campaign bites the dust.

I bet Rubio is breathing a sigh of relief.

Governor Chris Christie, R-NJ, is by all accounts a Republican governor of a Democratic state that has had considerable success dealing with the current problems faced by this country. As such, he is one of several people well qualified to hold the office of the President of the United States.

He fully deserves our gratitude for running. Certainly he has my thanks.

I am aware that certain vicious capital “C” “Conservatives” have first embraced and then ostentatiously discarded him with epithets like “He’s dead to me” and “RINO” and “GOPe.” However, I offer my thanks also to the hard-working, long-time Republican party members who worked so hard to give us a marvelous class of governors at this tumultuous and difficult time. The Republican governors as a class have presided over what economic progress this country has seen, over the last seven years.

Christie is perfect for New Jersey. He’s probably the best republican candidate they could have elected.

That said, do we want the rest of the country to be like New Jersey?

As someone who wants a big-tent party, I’m happy with what Christie has done in New Jersey and fully cognizant that we wouldn’t get a red-meat conservative elected in that state.

You’re also correct, the current Pub governor class has been (by and large) a good one.

That said, he wasn’t in my top five picks for president.

Thanks Governor Christie. Time for you to go back to Joisey and fight the good fight there.

Christy single-handedly swung the election for Obama in his second term. He’s boehner, only louder, fatter and not drunk.

Christie spent the second highest amount per voter in the state after JEB Bush at around $85o per vote. He also spent a lot more tine in New Hampshire than many candidate

Cruz spent the least around $18 per vote. Trump’s $40 per vote is somewhat deceptive as it doesn’t factor in the saturation coverage the media has given his every word and appearance. The media has decided that Trump, a lifelong supporter of Democrat candidates and urban liberal cause, is the Republican narrative this election cycle.

If 2008 marked s media low point in selling a pedestrian politician as a sophisticated and glamorous celebrity, 2016 marks their attempt to sell a low brow celebrity as a viable politician. In each case they are betting they can fool some of the American people all the time.

Last night was no cliff hanger for number one.

That Kasich came in at number two is a puzzle.

Rubio and his supporters must be shell shocked.

I think Kasich came in second because he is really a center left Demorat. In fact several Demorats said that if they were Republicans they would have voted for him. Almost all of his positions have been to help the poor and make sure we are all equal. He just is not the right man for the tough job ahead. As Trump said, “Without the oil money Ohio was getting from fracking, Kasich would be a economic failure”.

Kasich spent most of his time in NH, and only got most of John Huntsman’s voters. Huntsman dropped out of the race after NH, and Kasich’s second place might get him from 4% to 7% in future states.

That’s a shame. Kasich’s is sincere about his beliefs, and he even endorsed amnesty on the stage last Saturday night while Rubio threw up squid ink everywhere and got called on it. He’s got a record, it’s a successful record (Donald Trump thinks he was saved by the fracking boom).

The real winner in both parties last night was “none of the above”.

Kasich is also electable, if he can deliver his home state of Ohio.

Somebody like Bush or Rubio (or Cruz) is just offering a rerun of the Bush/Romney/McCain Jesusland Red States/Blue States strategy and there just aren’t enough voters to make that work anymore. (Rubio is getting outpolled by Hillary 77-17 on Hispanic voters in NY, the strategy doesn’t work.)

“Kasich is also electable, if he can deliver his home state of Ohio.”

Kasich is in the same boat as Rubio and Bush. People will stay at home and the Democrats will win. The only real candidate that can get elected is Cruz. The conservatives will come out to vote if he is the candidate. Trump won’t be able to overcome his negatives to win the general if he is nominated.

Which state can Cruz win that Romney didn’t already win?

(hint: there are very few Evangelicals in the states Romney didn’t win).

Wisconsin, Iowa, Colorado, New Mexico, and Florida would be winnable if the conservatives come out to vote. Especially if they don’t vote for libertarian or write in candidates. Hell might even pick up several more states. None of the other candidates have a chance of picking up the conservative vote.

Christie’s attack-Rubio campaign was clearly not in his interest — if you define his interest as winning the nomination. So maybe that wasn’t his goal.

You have to wonder whether he made a deal with Bush or Kasich — is he now on the VP shortlist for one or both of them? They were the big beneficiaries of Rubio tanking in NH.

Donald Ducks reports that he and Christy had “a long conversation” last night.

Christie is just looking for his next job. Would he be a good attorney general? Probably he would be better than most Bush attorneys General, but that is an extremely low bar.

I imagine he’d remain independent enough to piss off Trump on occasion. I can’t see him taking the role of lap dog like Holder or Lynch.

The Donald: “Hi Barry, before we walk around the White House, do you mind if I bring along my dog.”
Barry:”Hell no. But you’ll have to leave that pony behind.”
The Donald: ” That’s not a pony that’s my dog. He’s a …”
Barry: “A dog? He’s a big one. What kind of dog is he?”
The Donald: ” … Caucasian ”
Barry: “A WHAT”
The Donald: ” … technically a Caucasian Ovcharka. They make good guard dogs. He would take some pressure off the Secret Service.”
Barry: “oh. What’s his name.”
The Donald: “New Era”
Then New Era eats Bo.

Then both break up laughing.

Facepalm.
The above are in teh wrong story.
Be right back.

Fiorina should get out. It’s a shame Kaisich placed second otherwise he would be gone.