Which candidates are most likely to drop out after tonight’s primary? 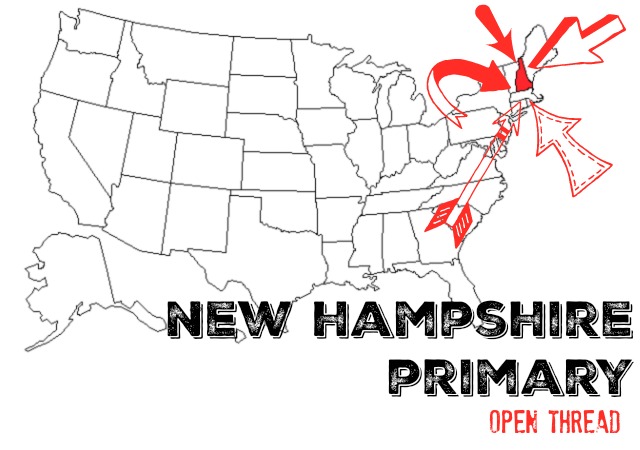 Welcome to our New Hampshire Primary open thread! Thanks for stopping by. We’ll be updating with well, updates, headlines and other sundry news, but most importantly — things that make me laugh.

Be sure to refresh your browser tab frequently for the latest. I’ll be manning the thread all evening. Have questions? Put them in the comment section and I’ll do my best to answer.

Polls close at 7:00 PM ET in most of the state. But in 20 some-odd communities, polls will close at 8:00 PM ET. We’ll cover reaction and results as they trickle in, but in a separate post.

FLASH POLL: Which Republican is MOST LIKELY to DROP OUT after New Hampshire?

We want to hear from you, Dear LI reader. Make your picks in the poll beneath. You can select up to three candidates. Our poll closes when New Hampshire’s polls close — 7:00 PM ET.

It’s a primary, not a caucus

Unlike the mob-like caucus set-up in Iowa, New Hampshire has a regular ol’ primary. Voters cast ballots, those ballots are counted, winners are determined, and dreams are shattered.

Up for grabs, 23 Republican delegates and 32 delegates for Democrats.

Not Kenny Rodgers Makes His Predictions

Complains dude adorned in a cardboard box, wielding a colander…

On ground after they shoved me over pic.twitter.com/H7Ema1rhPB

Heh. From the New York Times:

Days after two of Hillary Clinton’s most prominent female surrogates, Madeleine K. Albright and Gloria Steinem, drew fire for their comments about young women supporting Senator Bernie Sanders, another Clinton surrogate proposed that the two women be pulled from campaigning for Mrs. Clinton.

On a conference call with elected officials supporting Mrs. Clinton on Tuesday, Deb Goldberg, the Massachusetts state treasurer, suggested that Ms. Albright and Ms. Steinem be “kept away” from Mrs. Clinton’s campaign, according to a person briefed on the call who could only discuss the private conversations without attribution.

Christina Reynolds, a spokeswoman for the Clinton campaign who was on the call, replied that she appreciated the feedback but did not elaborate on how the campaign would handle the two high-profile supporters, who in recent days called for young women to basically grow up and support Mrs. Clinton.

The dust-up began on Saturday when Ms. Albright, 78, the first female secretary of state, criticized Mr. Sanders’s “revolution” and said electing the first woman as president would be the real revolution. She then repeated one of her best-known phrases, telling the crowd, “There’s a special place in hell for women who don’t help each other!”

Ms. Steinem, 81, and an iconic spokeswoman of the feminist movement, told the talk-show host Bill Maher that young women supported Mr. Sanders to attract the attention of boys.

“When you’re young, you’re thinking: ‘Where are the boys? The boys are with Bernie,” Ms. Steinem said.

If your key issues are zombie preparedness and free ponies, Vermin Supreme might be the right candidate for you

He also claims he paved the way for Donald Trump by pioneering, “ridiculousness politics.”

Lord help us all

Kasich is winning the Google search primary in NH. May be meaningful as voters search for a focal establishment pick https://t.co/d8VTB9FlXJ

BREAKING: No one knows anything until the ballots are counted, at which point someone will have more votes than everyone else

BRB, going to stab my ears

Merrimack is a cluster

Line of people waiting to vote in #NHPrimary estimated to be 2 miles long in Merrimack https://t.co/3ktMY2ZER2 #WCVB pic.twitter.com/jcHDKgf2ue

From a volunteer on the scene, Merrimack is a nightmare right now. They may keep polls open later, line is "incredible"

Where the young things are

HOW TO WATCH NH: Here is a map via @L2political of young voters in the southern region of the state pic.twitter.com/Y3PVS9wfRa

I recommend a special hashtag for Hillary tonight … #IsTheBloodlettingOverYet

Heck, Pat Buchanan won the thing in ’96. The state’s always been a little off.

If Christie doesn’t have a head-turning showing, where does he go next? SC & Super Tuesday don’t look likely places for him to succeed.

Carson may just be tired of it, campaigning is a grind without the compensating importance of neurosurgery.

Prediction: Trump wins with 25; Kasich comes in 2nd; then Cruz; Bush; Rubio; Christie. I think Carson will hang on till S. Carolina, then drop. Christie is the 1st out on Wednesday.

Hillary will get kicked to the curb in NH by ‘envy, greed & theft’ Bernie and his parasite minions, but like an undead queen of zombie hordes, she will ooze to S. Carolina with a vengance.

I believe Rubio will come in third

“Christie is the 1st out on Wednesday.”

Fiorina’s RCP polling avg. in SC is lower than Christie’s, and she’s not higher than him nationally, either. I don’t see her path any better going forward. Currently, unless either of them place in the top 5 in today’s primary, they’d both miss this Saturday’s CBS debate in SC. At least the media’s been talking to and about Christie in NH….as for Fiorina, barely a whisper. I’ve got $2 on Fiorina to Win in the race to the exit.

Either the news media is pushing the following narrative or it is really happening. But they are pushing there are Bernie voters in the 40% of voters that are “undeclared” as to party that are assuming Bernie has it in the bag and are therefore choosing to vote in Republican primary for one of the liberal candidates like Kasich and Christie. If this is happening it will show up in Bernie winning by less than expected percentage margin and Kasich/Christie overperforming on a percentage of vote basis.

With what happened in Iowa between Clinton and Sanders, I don’t think you will see a lot of crossover.

Why isn’t Gilmore in the poll? My gut feel is that he is the only one who may drop out before SC.

Because everyone forgets about Gilmore?

I deleted cookies. Tried it again. No joy. Not LI’s fault. It’s likely a Poll Daddy glitch of some sort.

Roger Waters and Bob Geldoff seem to get all the attention.

By all rights, Jim Gilmore should have a question mark after his name for branding’s sake, the way Jeb! has his exclamation point.

Seems the poll is broken for some reason.
For laughs, I voted Rubio and it didn’t register.

It doesn’t matter if Gilmore drops out or not.
The results are the same except the donor money he wastes.

Try refreshing. Poll is working when we test it.

Will be interesting if this slip by Fox News turns out to be accurate:

According to Fox News, more than six hours before the polls close, Donald Trump won New Hampshire with 28% of the vote. Florida Senator Sen. Marco Rubio slid into second with 15%. Cruz took third place with 12%, Kasich fourth with 11%, Christie fifth at 9%, Bush sixth at 8%, Fiorina seventh at 4%, Carson eighth at 2%, Gilmore at 0%

– but not really. In one of those online glitches that inevitably occurs on election day, Fox News accidentally and prematurely declared Trump the winner.

Do you ever have anything to contribute that isn’t a direct cut ‘n paste from Trumpbart?

I write lots of original content. Rather than just act like an unthinking monkey throwing feces at passers by.

65 % of voters said the debate had an impact on their vote. Doesn’t bode well for Rubio. Oh, well

Trump has been leading the polls in the granite state for months. While I believe he will underperform his public polling dominance once more, the lack of a coalesced rival – like Trump faced in Iowa with Cruz – gives him the edge in a crowded field. Not to mention that if a progressive nationalist like Trump can’t win the least religious state in the country, then I’m not sure where he can win.

The liberal Ohio governor has pinned all of his hopes on New Hampshire, so his well-received debate performance the other night couldn’t have come at a better time. Kasich was left alone to make his pitch to the state’s voters while Chris Christie pulverized Marco Rubio on his behalf. Remember, this is a state that has twice voted for John McCain in its primary, and Kasich is cut from the same cloth.

Less than 15% of the state’s GOP base identifies as evangelical and/or born-again Christian, and it’s a state that’s sadly grown increasingly hostile to movement conservatives in recent years as well. Yet being the only one of those in a crowded race of progressives/moderates could actually benefit Cruz, because he’s the only one really going for the conservative vote. Plus, he’s picking up some of Rand Pau’s libertarian base at the end here. However, the last three contested Iowa Caucus winners (George W. Bush, Mike Huckabee, and Rick Santorum) have averaged only 17% in New Hampshire, so that’s where I’ll peg Cruz.

He called Iowa very well. We’ll see how he does tonight.

I have trouble understanding how Kasich, Bush, and Rubio get 48% of the vote, when they’re really competing for the same voters — though with enough “anti-Trump” voters crossing party lines, I suppose it could happen.

Exit poll results as compiled by DecisionDeskHQ today. Just found them. I’m not sure how many people were polled or margin of error:

So it’s a sweep for the old, NE Progressives…!!!

I find it amusing that Gloria Steinem and Madeline Albright are getting whanged for indulging in Trumpian plain speech. No doubt they see this as a sign of sexism, while the young ladies see their attitude as sexist.