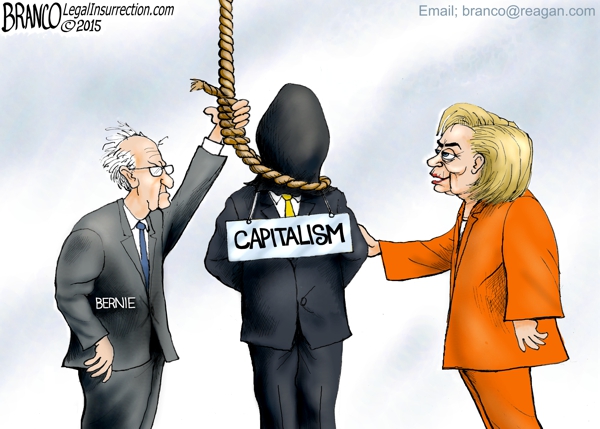 The Democratic Party’s acceptance of socialism isn’t a new phenomenon. In fact, we’ve documented it on this blog many times.

Now Politico is reporting a new poll which confirms that most Democrats are fine with this:

The term ‘socialist’ once was used as an epithet in American politics. Perhaps no more.

In a year in which Bernie Sanders, a self-described ‘Democratic Socialist,’ is running a competitive primary campaign for the White House, a new survey finds that a healthy portion of Democratic primary voters are favorably inclined toward socialism.

Nearly six-in-ten Democratic primary voters believe socialism has a ‘positive impact on society,’ according to polling conducted this month for the right-leaning issue advocacy group American Action Network and provided to POLITICO.

Democratic voters in every age group, every gender, and every race view socialism favorably, according to the early February telephone poll of 1,000 likely Democratic primary voters fielded by Republican firm OnMessage Inc. and commissioned by AAN, which is tied to the Congressional Leadership Fund super PAC dedicated to House Republicans. And among people 45 and under — a group that has helped power Sanders’ primary performances — the ideology is preferred to capitalism by a margin of 46 percent to 19 percent.

This new acceptance of Socialism is tied to the rise of Bernie Sanders and one of the largest groups in his base of support; Millennials. The same people who are demanding safe spaces on college campuses are driving the party of the left, further left.

A plurality of young people choose Sen. Bernie Sanders of Vermont, at 74 the oldest candidate in the 2016 presidential race, as the political figure they like and respect the most.

Thirty-one percent of Americans aged 18 to 26 rate Sanders the highest, followed by President Barack Obama with 18 percent and Democratic presidential candidate Hillary Clinton with 11 percent, according to a survey by Republican pollster Frank Luntz. Nine percent of young people say Republican front-runner Donald Trump is the political figure they like and respect the most.

Fifty-eight percent of young people choose socialism over capitalism (33 percent) as the most compassionate system. Sixty-six percent say corporate America “embodies everything that is wrong with America,” compared with 34 percent who say corporate America embodies what’s right with America. A plurality of 28 percent say the most pressing issue facing the country is income inequality – one of Sanders’ top themes. Next on the list of pressing issues among young people is the cost of education, with 24 percent. This is another main theme for Sanders in his campaign.

In 2008, college students helped give us President Obama.

Now they want to give us President Bernie.

It’s time to raise the voting age to 30, except for those in the Armed Forces.

Whoever the Republican nominee is, it is going to fall upon his campaign to do a job the American education system has failed to do… educate younger voters on the evils of Socialism. To me it seems it should be fairly simple as history abounds with examples of evil Socialist regimes and their catastrophic economic failures. And the “shining” examples they’ve been taught about in school need to be exposed for the lies they are… not a single European “Social Democracy” would exist today without the post-WWII military spending of the US which was paid for by… wait for it…. Capitalism.

The problem with our socialist run state schools (Karl Marx would be proud) is not just that they teach lies, but they also leave stuff out. For example, everybody is against the Nazis, but do they ever call the the National Socialist? No. We all know Hitler killed a bunch of Jews, what about the others? Gypsies, Catholics, blind, and crippled, dissenters? Not a word, but there were millions deemed unworthy to live and so killed. But Stalin killed more, and Mao killed more than him. The press covered up for Stalin.

We need to decriminalize school truancy and stop the child abuse. Those teachers are brainwashing the children in countless ways.

There is a lot of “apples vs. oranges” involved.

For one thing, the concept of “socialism” has been defined down. Recall Warren’s “You didn’t build that.” In that view, anything this side of anarchy counts as socialism; laws, roads, a postal service, etc. Continuing that line of reasoning, socialism must be a vital component of almost any conceivable society. So, who could reasonably oppose it?

Another linguistic bit of sleight-of-hand is older but even more pernicious. That is the idea that the fundamental conflict is between “socialism” and “capitalism”. But capitalism is not an important component of any economy. Capital is important, even in socialist economies. The distinction is between private and public capital. Private capital conjures up the dreaded “capitalist”, a bogeyman who can inspire hate and envy of a sort which “capital,” or money, by itself cannot. But most of us who aren’t socialists aren’t capitalists either, in the sense that we don’t live primarily off the earnings of our money. So Marx could divide the world into workers—farmers, miners, factory workers, teachers, writers, physicians, actors, cabbies (i.e., anyone who earned a living by slogging in to work every day)—and capitalists, who lived off interest and investments. Once that division is established, the “capitalist” is an actual person who can be demonized as a lazy vampire who lives off the sweat of the workers’ brows; class warfare becomes possible.

What I suspect most of us mean by “capitalism” is really “free markets;” we go through life producing and consuming according to some minor variant of supply and demand, rather than by the command of some central committee.

The idea of intelligent control of an otherwise apparently chaotic process has genuine appeal; it’s tempting to think that an intelligent methodology can improve on nature. The problem is actually doing it.

But playing along with the whole “socialism vs. capitalism” terminology has been a bad PR blunder. It is really “coercive planning vs. freedom”. That’s a more accurate description, and it sounds better, too.

I’m not even an American, but aren’t some folk forgetting Wilson and FDR?

Well, those two jackasses helped to grease the skids for our country’s slide towards socialism, that’s for sure. Both Wilson and FDR had nothing but contempt for the Constitution. Additionally, Wilson (a Democrat, of course) was a flaming racist as well, but don’t bother to mention that to bernie’s babies. They couldn’t care less about history, and are willing to sell their souls and their birthright for a mess of pottage.

Who needs a poll to verify that nugget of truth?

If you like your rights, you can keep your rights…. unless they run contrary to the goals of the collective.

Socialism has been responsible for the death, destruction, and agonizing torture of hundreds of millions of people.

Take Socialism Seriously! How many gulags and concentration camps do we need to prove it is not the answer?

Pretending NAZIs are/were not Socialists is like pretending ISIS is not islamic. Don’t fall for it! Remember, the Nazis and Soviets started out as allies.

These people who THINK they want to get rid of Capitalism, the Free Market and ALL that implies and embrace Socialism just don’t understand that if they do this, they will be at the COMPLETE MERCY of an UNMERCIFUL GOVERNMENT…!!

Socialist governments are NOT free and benevolent, they are controlling, threadbare, oppressive, ineffective, jobless, have horrible healthcare with long waits in dirty clinics among other things and are always scrambling for MORE of your MONEY which, without jobs, is just not there….!!

Those people should live in a REAL Socialist country….like Venezuela where there are always shortages….currently Venezuela doesn’t have toilet paper, toothpaste or even food…!!! Do some research, get a reality check and abandon the Socialist agenda….it just does not work for countries full of REAL people who value independence, freedom and dignity….!!

Re: The Free Stuff Party. I like to call them the GimmeThat Party. As in GimmeThat free cell phone, or oh—just fill in the blank. To tell the truth, I’m surprised Obama’s not giving away free televisions since the advent of digital signals.