“As American as apple pie.” 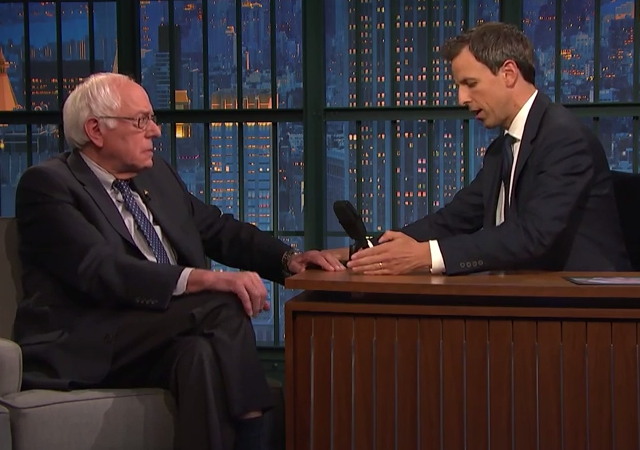 Have you noticed that the same media that uses words like “extreme” to describe Ted Cruz, Scott Walker, and other Republicans finds nothing out of the ordinary when it comes to Bernie Sanders?

Sanders, who wants a 90% tax rate for the wealthiest Americans, and recently came under fire for a 1972 column describing female rape fantasies, describes himself as a socialist—yet the media treats him like a viable candidate for 2016.

Socialism is the most important aspect of Sanders’ political identity and goes a long way in helping us understand the media’s kid-glove treatment of him.

Jennifer Harper of the Washington Times:

There’s yet another trend in the trendy news media, identified by more than one concerned critic. Consider a new Investor’s Business Daily editorial titled “The soft-soaping of socialism in the U.S.” The publication focuses on the happy-go-lucky press coverage of a certain Vermont independent making a vigorous run for the White House as a Democrat.

“Bernie Sanders is coming on as a presidential contender, while polls show surprisingly large parts of the public look favorably on the socialism he espouses. The public apparently has forgotten socialism’s record. For years, Sanders, an avowed, unapologetic socialist, was viewed as an anomaly of U.S. political life, an eccentric whose atypical ideology reflected the supposed quirkiness of his home state of Vermont,” the editorial says.

“Now that’s changed, and with Democrats worried about the scandals surrounding their top candidate, Hillary Clinton, Sanders is attracting ever-bigger audiences on the campaign trail. Polls show him at 15 percent of the Democratic tally. Maybe that’s because Sanders is portrayed in the media as ‘a normal guy’ — as a Washington Post headline put it — while liberal media doyen Bill Moyer headlined ‘despite what corporate media tells you, Bernie Sanders’ positions are mainstream.’ In the Huffington Post, distinguished professor Peter Dreier of Occidental College, one of Barack Obama’s alma maters, declared, ‘Bernie Sanders’ socialism is as American as apple pie.’ “

In a way, we’re witnessing a replay of the 2008 election. The Democratic Party’s far left base is once again rejecting Hillary Clinton in favor of a far left candidate and just like then, the liberal media is leading the way.

Look at these headlines:

There are plenty more just like that being published daily.

We are witnessing a campaign by progressives in media to make Bernie Sanders’ ideas look mainstream.

They’ll vote for Hillary Clinton if they have to, but they want someone like Sanders and they’ll do anything to make him look as non-controversial as possible.

Their enthusiasm for his ideas shows just how far left the Democratic Party has drifted.

Bernie is the quintessential Collectivist.

And he hates America.

So how do you really distinguish him from Hellary or Barracula?

You got it Paul!

Socialism, like Communism and Nazi & Fascism is pure evil.

I guess the prog hacks in the media won’t be asking ‘ol Bernie about the lack of toilet paper in Venezuela, or the fact that inflation there is now skyrocketing out of control, or the fact that many doctors in Cuba have to moonlight as hookers so that they can feed their kids. Yeah, ain’t socialism just grand?

They’re already blaming the “privately-owned manufacturers and retail stores” for failing to “provide for the needs of the people”, and the Venezuelan government should open government stores to compete so “private stores will operate properly” as one pundit put it.

There is a certain disconnect when these millionaire teleprompter readers get all warm and fuzzy about socialism. Don’t they realize what it would mean for them personally?

You have to be dumb and stupid to believe in it and push it.

You’re looking at 2 prime examples of stupid and dumb in that pic in my opinion!

Don’t they realize what it would mean for them personally?

They do realize it. What they realize is that, should the country vote socialist (one man, one vote, one time), their efforts in ‘winning’ the election would be rewarded by their appointment to the nomenklatura class – a perpetual gravy train for them, and perpetual subservience of all their class enemies who voted ‘wrong’.

… completely unaware that the wannabe socialist “politburo” views them as “useful idiots” at best.

As someone who lost his grandparents, an aunt and an uncle to Ho Chi Minh’s reeducation camp, I have no problem saying that I want to spit and punch Bernie Sanders in the face.

I want to spit and punch anyone who thinks Socialism is a more compassionate version of Communism.

[email protected]#holes like Bernie and his nasty ilk in academia, media and politics are an affront to me and my fellow immigrants from commie and socialist countries. There needs to be a reckoning and accounting for what they’ve done in the last 100 years.

These control freaks + the fools who vote for them should be regarded as much of a threat to our civilization as their Islamists variety.

RE: “These control freaks + the fools who vote for them should be regarded as much of a threat to our civilization as their Islamists variety.”

The current fad of limp-wristed American populist “socialism” is a result of white-guilt manifesting as a poorly-understood function of do-nothing “activism” which requires little effort and some tax-write off donation money that those insulated actors, trust-fundies and other jet-setters pay lip-service to in order to feel as if they had actually done some good for the needy in the world when instead that very malaise which brings these fools to support this insanity so haphazardly is- in fact- making EVERYTHING worse for everyone except those same wealthy’s who never really cared or felt the suffering to begin with.

The Left, cynically, uses this mechanism to achieve it’s goals while the Right tries desperately to retain *some* moral standing while combatting immoral slime who exist only to increase their own share of wealth and power in spite of who (or how) it hurts.

Bernie Sanders is about as cute and quirky a Vermont Grandpa as Ho Chi Minh is endearing to the Vietnamese Boat People.

The primary line of defense against socialism is that it simply doesn’t work.

Well, there IS that.

But for my money, upstream of that objection is that it’s evil and anti-liberty.

My point being that even if chosen as the form of government, it will fail.

RE: Margaret Thatcher’s ‘runout of other people’s money’ comment… Imagine full socialism in America (permanent full leftist Democrat control, in other words), then predict how long it would take them to spend all the money and collapse the system – 6 months, lol?

You’ll NEVER convince the socialists of that, mountains of evidence be damned.

Bernard Sanders likes to talk about how high the tax rates were when Eisenhower was president (he wasn’t president when they were imposed, but he didn’t reduce them) but I was just reading that Eisenhower himself was the beneficiary of special treatment to let him keep more of his income for his 1948 book “Crusade in Europe”

Let me see what I can find out about that:

Eisenhower’s profit on the book was substantially aided by an unprecedented ruling by the Treasury Department that Eisenhower was not a professional writer, but rather, marketing the lifetime asset of his experiences, and thus only had to pay capital gains tax on his $635,000 advance rather than the much higher personal tax rate. The ruling saved Eisenhower approximately $400,000.[1]

So it wasn’t legislation, but a ruling by the Truman-era IRS.

Nobody, and I mean nobody paid that top tax rate in Eisenhower’s day, or anything close to it. Tax shelters were the CPA’s “bread & butter” in those days — and they got really creative at times.

Sounds like a great idea until you get there.

“Bernie Sanders, normal person.”
That they had to name him “Normal,” pretty much says it all.