The Democratic Party’s Descent Into Socialism

The Democratic Party’s Descent Into Socialism

At least they’re not pretending anymore 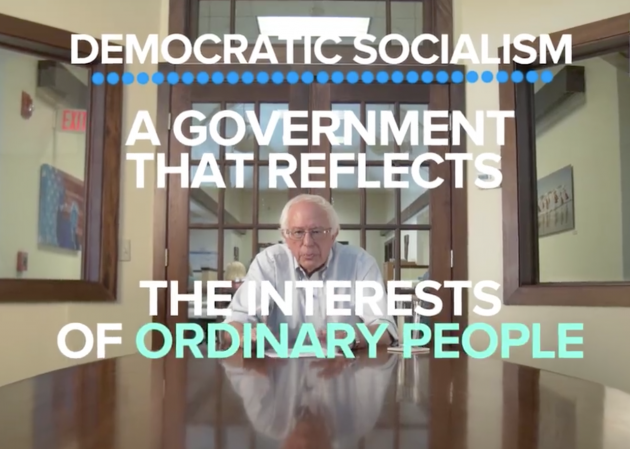 Once upon a time, referring to a Democrat as a “socialist” was an insult. Now? Not so much.

Compare the stats from May: 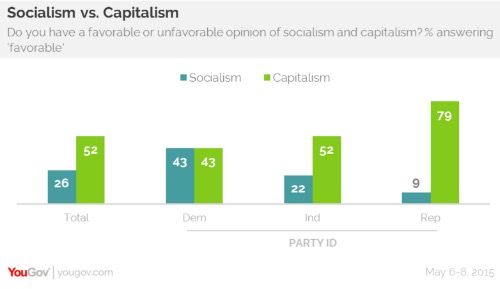 To the stats from October: 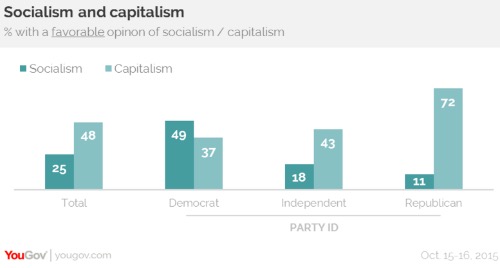 It’s worth noting that Republican numbers wavered slightly as well: a 2% increase in socialistic favorability and a 7% loss in capitalism love. Yet those numbers are still reflective of the ideological norms of most Republicans.

What accounts for the rapid Democratic shift leftward?

In a word: SandersMentum. You can thank Bernie for sparking the resurgence in socialism’s popularity among Democrats. Running as a “Democratic Socialist,” Sanders has promised free everything, hearts Scandinavian style social programs, and has the coveted Occupy Wall Street endorsement.

But surely Sanders’ proclivity towards the dreaded S-word is an outlier, right?

Not exactly. Democrats desperately trying to distance themselves from the Scarlet S struggled to explain how their party platform and socialism are incongruent with one another. DNC Chairwoman Debbie Wasserman Schultz attempted to to rebrand “Democratic Socialism” as “Progressive Populism,” but not even MSNBC bought the semantic bait and switch.

Tuesday, Democratic presidential candidate Jim Webb dropped out of the Democratic primary to consider running as an independent. Webb cited an aversion to “labels” as one reason for kissing the Democrats good-bye.

During the first Democratic presidential primary debate last week, Webb was remarkably out of place among his fellow candidates. Webb’s desire to focus on practically applicable solutions was no match for a party that has lurched so far left, their biggest concern is controlling the weather.

Hillary too, has jumped into the contest of which candidate is the most left-leaning. Once identifying as a moderate, she now self-identifies as “progressive.” Or at least she did last week.

“Socialism” for political expediency? Voter ignorance? Or are Democrats finally getting somewhat comfortable in the sunlight? I’d argue it’s a hybrid of all of the above.

It is a descent into a cult of utter ignorance and essentially, stupidity.

How people can be so ignorant – willfully or not – of history, is nearly incomprehensible. The only thing that does make such cultish ignorance comprehensible is a study of the rise of the Nazi Party in Germany. The parallels are stunning.

She survived Hitler and wants to warn America:

Hey – just a quick comment on the Webb video imbed:

And, I have to agree with your first statement – at least they are admitting it……now. When we tried to expose Obama and the left back in 2008 (and again in 2012) we were the “crazy right” “making stuff up.”

Truth prevailed. Too bad they won’t see we were right all along……

Yep, I remember getting flamed big time on social media for suggesting that Obama had Marxist tendencies. His decimation of the Democratic party will be his biggest legacy. He’s dragged the party so far left that it may never recover. This love affair with Socialism will be quite temporary in my estimation.

But it was so nice of them to eat their young. No new up and coming Dem pols because they’ve been defeated at the lowest levels…..

Yes, the page has a code line

There is nothing democratic about a socialist. Once the minions vote in all the power that the socialists want, then those minions will have no say in getting rid of the tyranny which results.

Useful Idiots is what they’re called

Ordinary people, you could almost say folk, or volk…

We’ve heard this song before. It ends tragically.

I am not wealthy enough yet to be a fashionable socialist, but someday I hope to be.

It’s good to have goals in life…

The conundrum is that no one under socialism ever gets wealthy enough to be a socialist. Except those elected. Time to get a glamour shot for your campaign posters.

chin up, head turned slightly to the right

He wants to be a socialist, so head turned to the left.

It won’t be long before those Democratic buggers are singing the praises of communism. “Comrade Hillary” has an ugly ring to it.

I thought they were already – for the past several years.

Isn’t that the Internationale I hear from all the Dems mouths?

I doubt “ordinary people” in America are interested in “state ownership of the means of production and distribution of goods and services”.

That’s why we have ABC liquor stores.

State “ownership” of the means of production is ONE form of socialism, the Leninist “internationalist” model. Under the nationalist model practiced by Mussolini and Hitler, the state merely directly through regulation and cronyism. The hybrid form practiced in much of Europe since the ’60s, “democratic socialism,” is closer to the latter than the former.

While many Democrats may still have an unfavorable view of the label, but they fully support the policies when voting, so what’s the difference?

That’s what you get when people start changing the meaning of words.

As of today though, I still need to see a dictionary that defines “socialism” as anything different that “state ownership of industry, capital, means of production and distribution.”

I cordially invite you to prove me wrong.

“1.a political and economic theory of social organization that advocates that the means of production, distribution, and exchange should be owned or regulated by the community as a whole.”

My bold and italics.

Socialism has been a failure for many centuries. ” When you run out of other peoples money.” It has never been a success. Next comes Marxist/Communism. The Tyranny we are being led to, by our Politicians is deadly.