So Bernie would be the first female president? 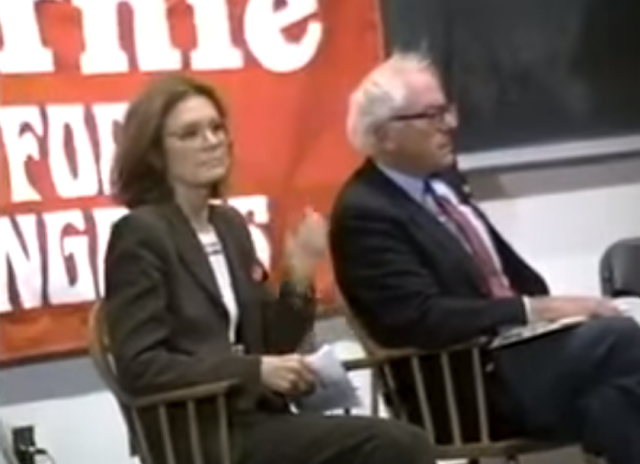 It is too bad for the Clintons that the Internet can travel back nearly 20 years!

But video taken 20 years ago show that Vermont’s socialist representative was made an “honorary woman” by feminist luminary Gloria Steinem herself. (Jump ahead to 15:44)

[I]n 1996 the famous feminist traveled to Burlington, VT to endorse him (OVER his female opponent) in what was a tough re-election fight against Republican Susan Sweetser.

Before Steinem, a former state senator told the audience that “a feminist is a person who challenges the power structure of our country” and “Bernie Sanders is that kind of feminist.” When it was Steinem’s turn, she announced: “I’m only here today to make Bernie Sanders an honorary woman.“

So if you are voting in the New Hampshire primary, no vote-shame is necessary. In fact, vote for Sanders twice…after you flip a coin. Then go find some dead relatives to vote Sanders, too!

In all seriousness, the Democratic primary has been more contentious than expected as Sanders has garnered more support than one would normally expect from a 70-something socialist.

As a Tea Party participant, I do understand some of the appeal: Sanders is running as the progressive anti-establishment entry.

…Bernie Sanders is a force I have not observed before in Democratic politics. From my point of view, Democrats largely agree about what they want to achieve and even the means to achieve it. They differ on the margins, whether a specific regulation should be adopted or not, whether a person represents the correct interest group or not. But in the main Democrats and their affiliates operate as a team. And a very effective one.

Bernie Sanders says that team is a failure, even a fraud. It’s not truly “progressive.” It’s a bunch of sellouts. It hasn’t taken us to the promised land of Denmark. A large part of it supported the war in Iraq. It’s not willing to support the “political revolution” necessary to effect real change in American politics and society. The Netroots rebellion of a decade ago challenged the party to live up to its principles. Sanders and his voters are calling for a new set of principles.

In essence, the liberal media’s lack of detailed and truthful coverage of President Obama’s domestic and foreign policy failures has made the Democrats more inclined to drink their socialism straight-up…leaving Hillary Clinton high and dry.

My colleague Aleister asserts that New Hampshire will be the high-water mark for Sanders. As a Democrat, I will hold off on that speculation for a bit longer, though I understand his logic. I think the number to watch will be how well Sanders performs with minorities that formed such a significant portion of Obama’s coalition.

Iowa and New Hampshire also lack nonwhite voters, who form a huge part of the Democratic base. Can Sanders win over some of these voters? Clinton has held a lead among nonwhites of nearly 40 percentage points in national polls. In Nevada, which votes after the New Hampshire primary, the electorate for the Democratic caucuses in 2008 was 15 percent Hispanic and 15 percent black. After Nevada comes South Carolina, where a majority of Democratic voters will be black.

But whoever the Democrats choose, the only thing they have to be ashamed of is being part of a party that has only managed to offer them a choice between a capitalism-hating gnome or a corrupt, enabling harridan!

Only in the halls of liberalism could this be mistaken as a compliment.

Bernice Sanders does have a ring to it.

Honorary and all, she’s really ugly.

A slap in every female’s face who identifies as a woman.

Seems to me she’s saying that Bernie is her b*tch.

Some of these Regressive Democrats, are pure nuts. Old video tapes prove so many are off in left field, in the Democrat Party. Their Party is so far ” Off Track,” that they have no new ideas for years. They have now brought in the whole family. Hillary, Bill, Chelsia. They are not selling ” 90’s,” stuff, to the current College kids.