Iowa coin toss the “hanging chad” of the 2016 election?

Iowa coin toss the “hanging chad” of the 2016 election? 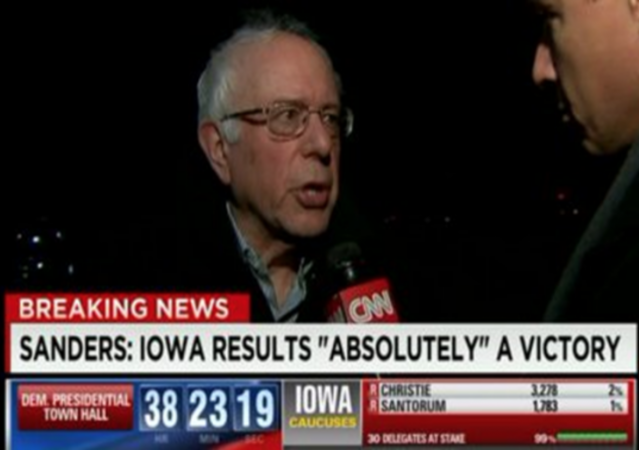 In his analysis of the Republican results in the Iowa Caucus, Professor Jacobson indicated that he was right to trust the voters to get the best result.

On the other side of the aisle, the Democratic Party placed its trust elsewhere. At least six Iowa precincts flipped coins to call Hillary Clinton the victor.

…A total of 484 eligible caucus attendees were initially recorded at the site. But when each candidate’s preference group was counted, Clinton had 240 supporters, Sanders had 179 and Martin O’Malley had five (causing him to be declared non-viable). Those figures add up to just 424 participants, leaving 60 apparently missing. When those numbers were plugged into the formula that determines delegate allocations, Clinton received four delegates and Sanders received three — leaving one delegate unassigned. Unable to account for that numerical discrepancy and the orphan delegate it produced, the Sanders campaign challenged the results and precinct leaders called a Democratic Party hot line set up to advise on such situations. Party officials recommended they settle the dispute with a coin toss. A Clinton supporter correctly called “heads” on a quarter flipped in the air, and Clinton received a fifth delegate.

Similar ties were reported in 5 other caucus locations and in all of these instances, Clinton won the toss. The odds? One in 64! Despite giving a “victory” speech, Clinton’s new found luck may be running out. Democratic voters are still scrambling to find party officials, indicating Sanders has won additional delegates.

Votes from one precinct in Iowa were still missing Tuesday morning, and Democrats from that neighborhood were scrambling to find party officials so that they could report their tally: Bernie Sanders won by 2 delegates. But the voters of Des Moines precinct No. 42 couldn’t find anyone at Iowa Democratic Party to take their phone calls. The party’s caucus hotline was no longer working. The party headquarters was locked. “It’s important considering how close the race is. We need to be sure everyone has our accurate count,” said Jill Joseph, a rank-and-file Democratic voter who backed Sanders in at No. 42 Monday night. Sanders won seven delegates, Clinton won five, Joseph told The Des Moines Register.

As of Tuesday morning, 90 precincts had yet to submit results. However, enough tallies have now been turned in so that the Associated Press has declared Clinton the official victor.

Shadows of the 2000 election are appearing on the horizon, as concerns have been raised that Sanders actually won the popular vote. Sanders and many of his supporters are now calling for the release of the raw vote numbers:

Bernie Sanders has called on the Democratic party to release a raw vote count in Iowa after a nail-biting finish left lingering doubts over the first, much tighter-than-expected, clash with Hillary Clinton for the presidential nomination. …He threw little light on an unfolding controversy over certain Iowa precincts that did not have enough Democratic party volunteers to report delegate totals for each candidate but did call on officials to take the unusual step of revealing underlying voter totals. Delegates are awarded in the Iowa Democratic contest on a precinct-by-precinct basis, irrespective of the state-wide vote for each candidate. “I honestly don’t know what happened. I know there are some precincts that have still not reported. I can only hope and expect that the count will be honest,” he said.

The Democratic Party results are aptly summarized by this tweet:

Presenting #IowaCaucus results as a victory for Clinton is laughable. She had a 50-point lead over @BernieSanders in June. #FeelTheBern

If Clinton actually becomes the nominee, a landslide win for the Republicans would be another high probability statistic to enjoy.

As of today, it appears that the Democratic Party is getting an early start on election shenanigans.

Perhaps the Iowa coin toss will be the “hanging chad” of the 2016 election?

The odds of this getting covered in depth by MSM are far less than one in sixty-four.

Not only that, but the odds are zero that the LSM will report that only 9,901 Democrats caucused as opposed to 186,291 Republicans. Source: http://www.decisiondeskhq.com//

Probably a bunch of dems crossed over to support Rubio in an effort to torpedo Cruz and Trump.

Been trying to understand this myself.

wiki does about as good a job explaining the difference between Republican and Democrat caucus as any, I guess.

“When the voting is closed, a final head count is conducted, and each precinct apportions delegates to the county convention. These numbers are reported to the state party, which counts the total number of delegates for each candidate and reports the results to the media.”

Two-Face is not dead. He’s been in Iowa counties with a two-headed coin scarred on both sides!

$5 says Hillary stole the coin tosses – and the coins.

sorry for the downvote, I was trying to reply…

Did her team steal the “B” and “S” keys off of the Sanders campaign computer keyboards?

Not yet. Wait until she loses in Vermont.

Bernie should be furious.

He polls awfully in minority communities, and his best chance to win was riding the 2 weeks of media preselection from winning Iowa and NH. Now he won’t get the free media and front runner treatment.

Not one, but six in a row all “won” by Hillary. Like everything else associated with her, a complete load of shit.

At his core, he’s a weak person. The most we’ll see from Bernie is some impotent rage. He may have had the election just stolen from him, but he’s too weak to do anything about it.

Grandma’s not going to be the nominee. The FBI will refer multiple felony charges to DOJ, at which point only one of three things can happen:

1. She’s indicted and has to leave the race to defend herself.

2. She’s offered a sweetheart plea by Lynch, but has to drop out in disgrace.

3. DOJ declines to indict, Comey & dozens of top FBI agents & supervisors resign in a bigger scandal than the Saturday Night Massacre of ’73.

#3 doesn’t save her, the statute of limitations won’t expire before Obama’s term does.

In any case, as I first predicted the week of July 4th on these pages, Joe Biden will emerge as the consensus party-unifying candidate. He’s acceptable to the far left Bernie Babies, loyal to Obama, tight with Labor, and an old Clinton ally.

He comes in to salvage what he can for other Democrats down the ticket. Joe can’t win unless the GOP nominates a clown.

Incomprehensible how many supporters Hillary still has.

You can be sure they used someone else’s coin.

The Hanging chad of 2016? well, it IS groundhog day after all.
Bill Murray was unavailable for comment….

Rorschach256: This is my official “comment of the day.” Brilliant.

You owe Windbag at 3:45pm at least an Honorable Mention.

Maybe Bernie should have been as observant as Aaron Rogers , he would have noticed it never flipped

So, two commies are arguing over the ethics of stealing something that belongs to someone else and giving it to someone who didn’t earn it? Okay.

A few choice insights into Bernie:
http://www.investors.com/politics/editorials/bernie-sanders-the-bum-who-wants-your-money/
Despite a prestigious degree, however, Sanders failed to earn a living, even as an adult. It took him 40 years to collect his first steady paycheck — and it was a government check.

“I never had any money my entire life,” Sanders told Vermont public TV in 1985, after settling into his first real job as mayor of Burlington.

Sanders spent most of his life as an angry radical and agitator who never accomplished much of anything. And yet now he thinks he deserves the power to run your life and your finances — “We will raise taxes;” he confirmed Monday, “yes, we will.”

One of his first jobs was registering people for food stamps, and it was all downhill from there.

Sanders took his first bride to live in a maple sugar shack with a dirt floor, and she soon left him. Penniless, he went on unemployment. Then he had a child out of wedlock. Desperate, he tried carpentry but could barely sink a nail. “He was a shi**y carpenter,” a friend told Politico Magazine. “His carpentry was not going to support him, and didn’t.”

Yet as bad as he is, forced to choose between Sanders and Hillary, I think most of us would pause.

At which point suicide becomes an option.

Insurrection is of course a fourth option. If you are not willing to live under such circumstances, you can always try to change the circumstances. why throw your life away for nothing? if you are going to die, at least try to give your death meaning.

I appreciate your concern, I really do, but did you honestly think I was serious?

Ah, Democrats whining about voter fraud is so unbelievably hilarious.

Bonus points if you bring up clips of Bernie vocalizing the following bullshit:

“The GAO looked at study after study and found no credible evidence of voter fraud having had any impact whatsoever on the outcome of any election in recent history.”

But hey, now that Bernie is the one being defrauded suddenly it’s a problem, right?

As I understand it, when a given precinct found itself in a tie, they called the Iowa Dem Party office for instructions and were told to flip a coin.

Now, there are many ways to break a tie – rock, paper, scissors, for one. Cutting a deck of cards another. What the keen eye will look out for is if precinct Dem officials were ever given methods for breaking ties other than a coin toss. I mention this because I’m an amateur hand magician, that is, I juggle, manipulate coins, know how to ‘force’ cards (where it seems I’m letting you pick a card from the deck at random, but make you pick the card I want you to pick).

If that keen eye finds other methods offered, it next needs to look into whether local Dem officials were taught these sorts of tricks. (I can teach just about anyone how to force cards or control coin tosses in less than an hour of explanation and practice).

LI Cub Reporters, get on it!

The important point here is that Bernie Sanders actually won the, you know, *voting* aspect of this.

If Clinton got *six* of her 23 delegates by winning coin flips, that means it was Clinton: 17, Sanders 21 on merit. Huge win for Bernie. Huge.

“#FeeltheBern” – as if anyone actually wanted to give that creepy old goat a feel. It speaks volumes about the Democrat party and their base when their two most prominent choices are doddering old fools who have done nothing but leech off the public teat their entire lives, and who have “shared misery” as their goal for us ~

Biggest thing I saw come out of the dem caucus was that dems didn’t vote for one single minority.
100% of dems voted for a white candidate.
Party of racism.

So… Hillary won six for six on the coin toss.
Fine with me.
Lettum rot.
It doesn’t matter which one wins, neither will survive the term. It will fall to the VP. That is who will really carry the office. And Hillary will probably die in a Federal Penitentiary.
It is all details, and nobody even cares.

Those six coin tosses all used the same coin. Which was then returned to Hillary Clinton.

The odds of winning six coin tosses are about the same as turning a $1,000 stake into $100,000 trading cattle futures.