Issue is whether Officer William Porter can be compelled to testify against others. 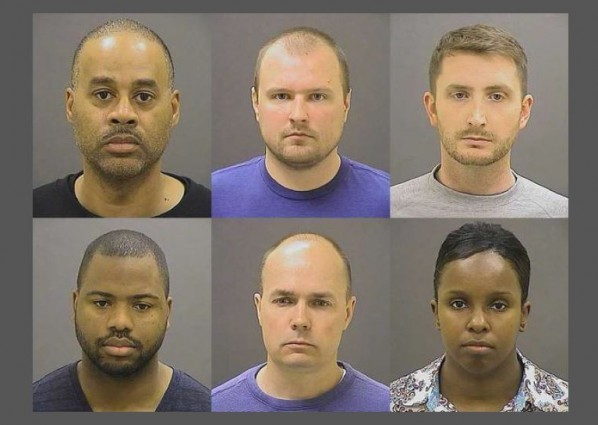 Maryland’s Court of Appeals (the state’s highest-level “supreme court”) ruled yesterday that the trials of the Baltimore police officers charged in the Freddie Gray incident will be postponed while they decide whether one of those officers, William Porter, can be compelled to testify against the others.

We covered the legal issues in a prior posts:

The next officer to be tried was scheduled to be Officer Edward Nero, in whose case jury selection was to have begun this coming Monday.

The difficulty in this case, and an area of law without precedent in Maryland, arises because Porter remains vulnerable to criminal prosecution. Porter was the first of the officers to be tried, last fall, but the trial resulted in a hung jury without verdict, and prosecutors immediately stated they would retry the case.

Prosecutors have said that Porter’s testimony is deemed essential to those other trials, and have long since announced that they consider him a material witness in those cases.

It is also the case that Maryland tends to be rather strict about requiring a speedy trial for criminal defendants, and criminal cases are rather routinely dismissed when a defendant’s right to a speedy trial is violated. This delay in the Baltimore officers’ trials is likely to raise substantive argument for their defense counsel that their client’s rights to a speedy trial are being violated and their charges should therefore be dismissed.

Keep your eyes here for ongoing coverage of the Freddie Gray trials.

Justice delayed is justice denied. But never mind – “Moms” Mosby needs to get a conviction before the Mayoral primary in order to boost her spouse’s election prospects.

Poor Sisyphus watches helplessly as another boulder rolls back down the hill . . .

As I understand it (correct me if wrong) even if Mr. Porter can be compelled to testify in state court with ‘limited’ immunity — the state can’t use his direct testimony to impeach him at his own trial — the Feds can certainly use it to impeach him at any federal proceeding. The Feds have not (and I should think) will not grant him anything.

Add to that the possibility that while the state can’t use his direct testimony, whatever he says will educate the prosecutors about the case. They’ll be that much more prepared to hammer him at his own trial.

So it seems that Mr. Porter is being put in exactly the position that the Fifth Amendment was designed to prevent: his own testimony will be used against him. I can’t imagine that the courts will let that happen in the end.

Any chance that IRS employees can be compelled to testify on their co-workers?

They have all those “privacy” laws that keep them back.

I’m surprised that William Porter hasn’t signed an NDA.
They worked so well for the State Department.

Could the dismissal of the charges resulting from the lack of a speedy trial be just the “escape” Mosby needs to get off this train before the wreck? She could blame (pick your favorite excuse) just as Obama blames everyone and everything for his own failing actions while taking credit for his victories.

That thought had crossed my mind, too. And on top of that, if the charges are dismissed, it will be the perfect excuse for more rioting.

I see this a good evidence to take heart that the criminal legal system in Maryland (EVEN Maryland) is at least no going to let these officers get crushed by a political prosecutor.

From the judge on up, this is a case of first instance, and it seems to be being handled rather carefully.

These delays are a disgrace. The machine that churns up black men is playing games to deny Justice for Freddie Grey. Black Lives apparently don’t matter.

Perhaps Obama will appoint one of the finest legal minds of this century, Ms. Mosby to the Supreme Court, so she can deliver justice from on high.

There is no case against the officers because the did nothing wrong. the arrest was legal because the knife was illegal under Baltimore law and even if it wasn’t a mistaken arrest isn’t a crime. Freddie Gray committed suicide while in custody and their is no evidence the police helped him. The only reason the officers were charged is that the prosecuted is pandering to black criminal scum voters.

*DO NOT FEED THE TROLLS*

Why not avoid this issue by re-trying Porter next?

I think the administrative law Judge rescheduled Porters trial , not Judge Williams , if Judge williams had his say I’m sure Porter would have been scheduled before everyone else.

A correction to be made. The Prosecution has never indicated that Porter was crucial to the final three, From the start they have indicated his testimony was crucial for Goodson and Rice.

I understand that Judge Williams did not rule that Porter could not receive immunity in the final three, but that he could not testify because it would introduce needless delay. That and the fact Porter was if not a last minute addition, a last hour addition. To strain a metaphor. Immunity was moot.

I have to wonder if the Appeals Court is even aware of this. I’m sure it’s in the briefs but did they get that far?

I also have to wonder what happens if they decide that there is no reason for delaying Nero’s trial but it was their mistake so no harm. I wonder if Nero could appeal to federal court on speedy trial considerations and equal protection considerations.

M osby has indicated that she wants to try them all starting with Porter in June and the rest in September . I wonder if anyone else has noticed that Officers Tensing , Slager and Van Dyke are scheduled Oct 21 ,24, and 31 . Just in time for ( guess what happens ,) the first Tuesday after the first Monday in November.

Even if there are delays , these cases will be in the news and if they go forward we could have verdicts right around election time.
All of these case are not as cut and dried as original observers noted , so we very well could have acquittals or significantly reduced charges .
Can we say riling up the voter base ?
Mosby will get a two fer , no trial before the April mayor primary

Do you really think that this judge will dismiss the charges simply because the prosecution arguably violated the defendants’ right to a speedy trial? This is the same judge who, despite the riots and protests being heard inside the courtroom during jury selection, ruled that the trials will be held in Baltimore. This is the same judge who violated Porter’s 5th amendment right and ordered the defendant to testify even though he faces retrial.

Why is the prosecution so sure that Potter’s testimony will help their case?

Rabidfox
Mosby is sure Porter will help her case because it will cause delay. The delay helps her husbands political prospects and also can put the trial in the middle of the election year and rile upup the Democratic base nationwide. She has indicated she wants to try everyone after Porter in June. This would stretch the trials from around August September thru Dec. Can you imagine how acquittals will drive the liberals and AA community to the polls.

Mosby must be heartened by the conviction of Officer Liang in New York.

It appears Liang shot and killed someone through the negligent handling of his service pistol.

That OUGHT to result in an involuntary manslaughter conviction.

Guns are serious business. People foreseeably die when they are handled negligently.