Hey Bernie supporters — Nice win you had there in NH, shame if something happened to it. 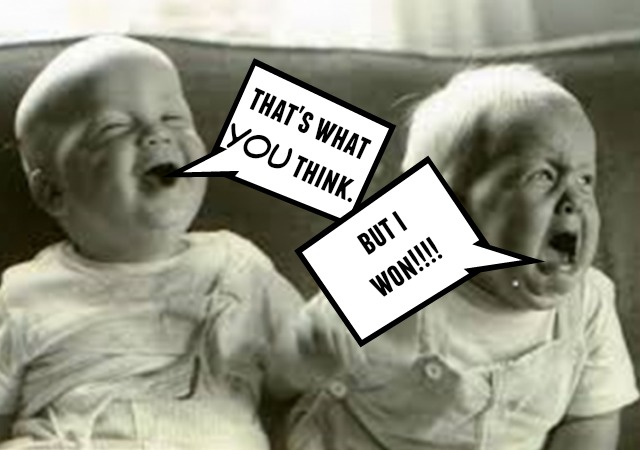 I will admit I have a taste for sweet schadenfreude.

After nearly a year of the elite media’s reporting breathlessly on the war among Republicans, social media is now covering veritable insurrection occurring among the Democrats because of primary system shenanigans.

Last week, we covered the Iowa Caucus coin flips that garnered Hillary Clinton more delegates than Bernie Sanders (despite the veritable tie). Now after trouncing Clinton in New Hampshire by a straight-up popular vote total difference over 20% points, Sanders will be leaving the state with an equal number of delegates.

…Sanders had won 13 delegates with his 20-point victory on Tuesday and is expected to raise that total to 15 by the time all of the votes are counted.

Two of the state’s 24 delegates are currently unpledged but will likely be awarded to Sanders once the results are finalized.

Clinton won nine delegates in the primary but came into the contest with the support of six superdelegates, who are state party insiders given the freedom to support any candidate they choose.

Superdelegate support is fluid, though, so some of those delegates now backing Clinton could switch to Sanders before the Democratic National Convention in late July.

But as it stands, the superdelegate support gives Clinton a total of 15 New Hampshire delegates.

The Clinton campaign has mounted an aggressive effort to secure about 360 superdelegates across the country, according to The Associated Press. Sanders has a total of eight superdelegates.

In fact, Clinton now has a huge lead in superdelegate support. 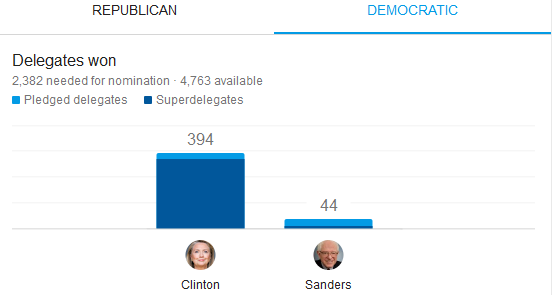 To say that Bernie Sanders supporters are unhappy would be an understatement.

There is now a movement to swing the superdelegate votes to Sanders.

Democrats have an new-found disdain of the mainstream media, and have noted the utter failure of endorsements to persuade voters:

As I have foreseen, elite media sources are attempting to paint this as a non-loss for Clinton. Today’s offering in The Washington Post: She did about as well in 2016 as she did in 2008.

The weird thing about the New Hampshire Democratic presidential primary is that Hillary Clinton did about as well this year as she did in 2008, percentage-wise. In the state’s main counties, Clinton performed on average only about two percentage points worse than she did eight years ago (according to vote totals as of Wednesday morning) — and in five of the 10 counties, she did as well or better.

Additionally, an under-reported audit of Iowa Caucus results have narrowed the margin of Hillary’s win to 0.25%.

I asserted that the result to pay attention the vote totals among minorities. It turns out that Sanders over-performed:

Perhaps the only surprise last night was Bernie Sanders’ competitiveness among nonwhites and mainline Democrats. A further thought this morning, sparked by Rick Klein, was to look at those groups by age. Voilà: It’s about those pesky youngsters.

Overall, as we’ve reported, nonwhites in New Hampshire divided evenly, 50-49 percent, Clinton-Sanders. That was unexpected, given that nonwhites have been among Clinton’s strongest groups in national polls.

This explains why Sanders is now trying to woo minority “leaders” among his party, like Al Sharpton. Ta-Nehisi Coates, an African-American writer for The Atlantic who opines about race relations, said he would be voting for Sanders. Furthermore, a progressive publication (The Nation) now proclaims that Hillary Clinton does not deserve the Black Vote.

During his victory speech, Sanders basically tried to crowdfund is campaign by directing donors to his website. As of this report, his team as raised $5.2 million. While I disagree with every premise in yesterday’s victory speech, he was obviously grateful for the genuinely enthusiastic support and seems prepared to begin acting like a front-runner.

If Clinton prevails and wins the nomination, I doubt there is so much hatred for Republican among the Democrats to convince all Sanders voters to support her this November. Americans like their winners to have won fair-and-square.

Clinton’s tactics have already soured voters on her. I expect we will be enjoying much more sweet schadenfreude by following the Democratic primary than originally anticipated. Stay tuned!

There is now a movement to swing the superdelegate votes to Sanders.

That’s the whole point of superdelegates—to allow the Party to control the nomination process, without those pestilential voters genuinely getting in the way. The old system for choosing candidates, the notorious “smoke-filled room” filled with Party bosses, never really disappeared; it’s now just a bit better ventilated.

Hopefully many socialists get so discouraged by this nonsense such that they won’t vote in November.

The problem is the progressive mindset is one of doing things to other people “for their own good”, things like banning 16oz or more of soft drinks, and disarming law-abiding people, or taking away their incandescent light bulbs. They don’t rest. They are like locusts, here to eat the crops in the field. As Maggie Thatcher would say, they care about inequality down here, not growing wealth way up here. They keep trying this socialism-communism-take away liberty and rightism while we grow weary.

There is a reason in parliamentary procedure that once a proposal has been voted down somebody on the losing side can’t re-introduce the measure.

Many many dem voters in NJ were so disgusted with Corzine they stayed home. That is how we got Christie. A tad better but still not a great governor.

The conservative peoples seem to be interested in a moral and virtuous society, where individuals are self-monitoring for moral and virtuous behavior. When the Republican Governor of a Southern state was having an affair, walking the Appalachian Trail, it was members of his own party who joined in calling for his ouster. Hillary is a liar and a thief. Bernie, by way of his communist leanings, is morally corrupt. Of course the two of them will try to cheat each other. In this case Hillary is better at cheating than Bernie.

I’m shocked, shocked to hear that there is gambling in there.

My first thought is that if this were happening on the Republican side to Trump, he would use it as an excuse for a third-party run.

I don’t think Sanders is capable of running third party. (1)

I do, however, think that Hillary stealing the nomination is a very good excuse for Bloomberg to run.

(1) Now that I think of it. In most states there is a Communist Party. They could make him their candidate. Hmmm.

So, in order to win, Hillary is going to have to steal 51 elections?

I don’t get it–the RNC and many members of the Republican pundit class are going “Would SOMEBODY PLEASE stop TRUMP”–but when the Democrats have a stop-gap against damaging candidates (after McGovern) it’s all “Haw-Haw–look at them!”

The standard: it is double!

Fair enough. Even with a big lead he chose to gain some fraudulent votes. Two dirtbags on the left and one dirtbag on the right. Who will win, a trumpster or a fraudster?
It’s up to us America.

Oh. Do you all not remember we went through all these gyrations in 2008, when then Senator Obama was running against Hillary? It’s all part of the contest. It’s not just about securing votes, it’s about securing support of party insiders which represents about 20% of the nomination process. Fraudulent votes? LOL. You guys are too much.

At the end of the day, it just gives you another reason to say that Hillary is a thief, and how untrustworthy she is.

The Democratic Party isn’t very democratic, is it?

Actually, it was Jimmy Carter, not Bill Clinton, who put in the system of super-delegates, after he had this long nomination fight with Ted Kennedy.

Superdelegates? Why haven’t we heard about this in the media? What is the point in holding costly elections and why do candidates spend thousands of hours making speeches around the country when “superdelegates” get to decide who they like?

Have to create some kind of activity so politicians can funnel dollars to their friends and family. Cousin, you’ll be campaign finance chief. For 8 months work, I’ll pay you $300k. Good friend of the family, I’ll pay you $500k to run my campaign.

Another name for this is the Clinton Family Crime Syndicate.

If you want your vote you can keep your vote!

The same thing happened more than once to Hillary Clinton the last time she ran. The Democratic party nomination process is easily gamed as was proven by Obama in 2008. Add to that the whole super delegate provision, and it’s easy to see that it’s the party that ensures that the person they want to get the nomination gets the nomination no matter what the voters say.

In August 2008, neither Obama nor Clinton had enough delegates to win the nomination. The super delegates decided the outcome when Clinton partisans decided not to launch a floor fight and go for a brokered convention like they would have in the old days of real politics. It’s all just a big show now.

But the implication is that this is something new to benefit Clinton is unfounded. The system has been in place for a while and it actually screwed Clinton out of a roll-call vote back in 2008.