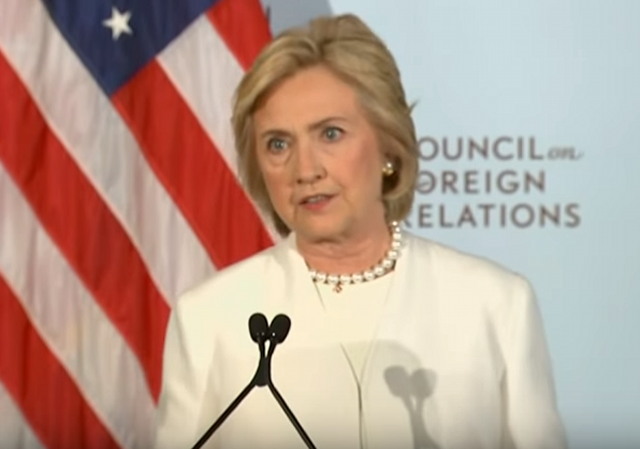 According to The Hill, forty-five of the newly published emails have been marked classified, bringing the total classified email tally to 1,319:

Thursday’s document dump is likely to be the second-to-last release of Clinton’s emails by the State Department, which has been ordered by a court to have the full 55,000 pages of emails to the public by the end of the month.

Forty-five of the emails in Thursday evening’s release have been deemed classified at some level, department spokesman John Kirby said, bringing the total number of emails with now-classified information up to 1,319. At least one of the new emails has been upgraded to a level higher than “confidential.”
Last week’s dump, which came on New Year’s Eve, fell short of a court’s mandate to release 82 percent of the supposedly work-related emails. Thursday’s release will bring the State Department up to that benchmark, Kirby promised.

“In just a few short days, we’ve been able now to catch up to the 82 percent that we were responsible for,” Kirby told reporters on Thursday. “We’ll continue to do the best we can moving forward.”

Combing through the monthly releases of thousands of Clinton’s emails has become a regular habit for journalists and political operatives throughout Washington. The majority of the emails tend to deal with trivial matters such as television shows and meeting schedules, but they have occasionally offered insight into the lives of Clinton and her top aides.

Some have been more revealing, however, with tidbits of information about diplomatic engagements and other government activities.

National security experts worry about the presence of hundreds of classified emails that passed through Clinton’s personal, seemingly unsecured server. That information may have been vulnerable to hackers, analysts warn.

The State Department and Clinton’s presidential campaign have both insisted that nothing that passed through Clinton’s email inbox was classified at the time it was sent. Instead, they maintain that the information was only classified after the fact.

Hillary as long-insisted that no classified information passed through her home-brewed server. That story then morphed into, “no information that was classified at the time.” That seems to be Camp Hillary’s story and they’re sticking to it. At least until they change it again.

Highlights of the classified email debacle include:

“The State Department and Clinton’s presidential campaign have both insisted that nothing that passed through Clinton’s email inbox was classified at the time it was sent. Instead, they maintain that the information was only classified after the fact. ”

Personal server use for matters of State is and was against the law, law that we all must obey!

Sur Hillary for all of the time and money spent on this whole ordeal and then put her in jail, pronto!

And sue her, too!

I’m sure all the real juicy culpable stuff resides in the 30,000 plus ‘personal’ emails that hillary deleted because she, the honorable honest declared as such…

Here’s a new one that all the HRC skeptics should appreciate, regardless of who produced it. Finally Republicans are fighting back!

Gee, I don’t get it, it’s only Thursday. Do they have something else planned for release tomorrow afternoon?

Good pitchers have a good change-up.

At least one of the new emails has been upgraded to a level higher than “confidential.”

This seems funny, as many businesses classify all internal documents and communications as “confidential”, so only the stuff greater than “confidential” is worth reading.

Yet still, the powers who currently have the responsibility to bring formal charges, will not do it.

The Queen and her court have deemed it so.

The State Department and Clinton’s presidential campaign have both insisted that nothing that passed through Clinton’s email inbox was classified at the time it was sent. Instead, they maintain that the information was only classified after the fact.

Say, right about the time people started asking about them…

It doesn’t matter, things like this will go on until someone goes to jail…and I don’t mean someone like Scooter Libby.

The Clinton Crime Family, can’t keep selling out America and having people disappear fro the world. She has done everything to hide her unlawful actions. She seems ” Bulletproof,” from prosecution of any kind. She and her husband have ” Sold out,” this country for money. They sold ” Super Computer Parts,” to China. She sold Uranium to Russia. Why, Why, Why, is she not in Prison. She & her Husband stole furniture from th e WH. That alone makes both ineligible for a Federal office. Just like Obama, they seem not subject to ” The Rule Of Law.”