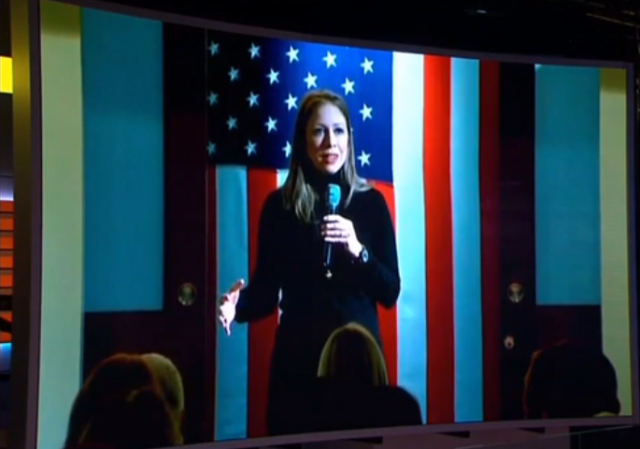 Chelsea Clinton is a highly successful person, for reasons entirely related to the circumstances of her birth, not her qualifications or personal accomplishments.

The sweetheart deal she received at NBC came to epitomize the crony political capitalism her parents so effectively turned into a megafortune, as this August 29, 2014, NY Times report reflected:

Ms. Clinton, who is vice chairwoman of the philanthropic organization her father founded, made an annual salary of $600,000 at NBC, according to Politico. She remains on the board of IAC/InterActiveCorp, the digital media company overseen by Barry Diller, a longtime Clinton supporter. In 2011, that position paid an annual retainer of $50,000 and a $250,000 grant of restricted stock.

When Chelsea was the child in The White House, and even after that when she was a private person, she was entitled to privacy and freedom from political attack so long as her political role was limited to trying to make her mother seem human to a skeptical public.

Even though Chelsea reportedly was the “Invisible Hand” behind Hillary’s 2016 campaign, she was treated with kid gloves by the media and Democrats.

Now Chelsea has thrown away the political protection as she takes on an attack role in her mother’s campaign. NBC News reported, Chelsea Clinton Takes Aim at Sanders Over Health Policy:

Stumping for her mother for the first time in 2016 on Tuesday, Chelsea Clinton directly criticized Bernie Sanders on health care policy, echoing Hillary Clinton’s recent attacks on the Vermont senator.

Asked about mounting enthusiasm for Sanders among young people, the daughter of the Democratic presidential frontrunner urged younger voters to focus on the “specifics” of Sanders’ policy proposals.

Chelsea’s attack dog debut is not being well received, and is viewed as a sign the Clintons are panicking.

The Hill reports, Chelsea Clinton goes on the attack; Democrats ask why:

Democrats have almost universally panned the attack, believing it to be ineffective and a misuse of her talents.

They note that Chelsea Clinton has mostly been used to highlight Hillary Clinton’s softer side as a mother and grandmother and say she seemed uncomfortable shedding her first daughter persona for the role of attack dog.

“The thing that tells you as much as anything about [the Clinton campaign’s] current state of mind is Chelsea going on the attack. It tells you everything you need to know,” said one Democratic strategist. “That this [challenge from Sanders] is real and they’ve got to be freaking out.”

The attack caught many Democrats, including Sanders and his supporters, by surprise.

Following Tuesday night’s State of the Union address, CNN played the clip of Chelsea Clinton’s criticism directly to Sanders. The Vermont senator held back a wry smile as he offered a measured rebuke of Chelsea, who is nearly 40 years his junior.

“As much as I admire Chelsea, she didn’t read the plan,” he said.

Like so many statements the Clinton campaign has made about Sanders position on health care, Chelsea’s contained some true statements — and some wildly misleading implications.

Even Jim Geraghty at National Review calls Chelsea’s attack dishonest. Sure Bernie may “dismantle” Obamacare, but only by replacing it with the progressive dream of single-payer, not with a market-based alternative:

But as flawed and dangerous as single-payer is, Sanders’ plan only “dismantles” Obamacare, CHIP, Medicare and private insurance to replace it with taxpayer-funded care for everybody. Chelsea’s pointing to only one-half of Sanders’ agenda in order to make it look like he wants to unplug Grandma from the respirator and snatch away Tiny Tim’s cane.

This truly is a monumental moment in American politics. Chelsea Clinton has accomplished something no other Clinton ever did: Bringing Left and Right together.

If so, it will be Chelsea’s only real accomplishment.

Poor kid. While I firmly believe that we all have choices in determining who we’ll be and what values we embrace, poor Chelsea was more beset with sewage from her family than most.

I mean, being a pathological liar CAN have genetic component…

Having been raised by these two parents, one can imagine the “conversations” she was privy to growing up. With the take aways she learned, this girl probably qualified for a PHD Degree in the Political Science of Obfuscation by the time she reached 18.

…and here all this time I thought she was sHillary and Web Hubbells love child….have you ever seen pics of them together???? 😉

Liars as parents produce a liar: Who would have guessed?

Not a bad idea to have all the Clintons go down at once.

Bill has probably suggested that.

They are from Arkansas after all

Where are you from?

I live in Texas, so I’m allowed to tell Arkansas jokes.

Unlike T-rump, Bill has never leched on his own kid. That may be part of what got him “Father Of The Year”…

Actually it was a humanitarian thing. He went out of his way to raise another man’s kid. And as you can imagine Webb Hubbell was eternally grateful!

…wry smile …“As much as I admire Chelsea, she didn’t read the plan,”

That was a perfectly balanced, effective answer.

I’m not going to vote for Bernie, because I don’t like his policies, but I can admire a good answer.

Henry, it’s not even five o’clock and it’s only Thursday… put the whisky bottle down.

Oh, c’mon. Tell me you haven’t thought about it.

Attack dog? And now she’s hot? Well, she kinda reminds me of a sweaty Sharpei.

With their penchant for obfustication, I am reminded of that joke from waaaay back when.
Hillary: Chelsea, are you engaging in sex?
Chelsea: Well, not according to Daddy…

To be fair, she has been tainted by her parents’ ambitions. Still, she deserves a fair hearing of her principles, and to be judged by the success of reconciling individual dignity, intrinsic value, and natural imperatives.

And to be fair, that is going to take time and testing. This being her first major venture in a public forum and the voting public, she has just stepped off that pier into deep water to join her mother as her mime. Like everything else she has enjoyed, it was endowed to her, not earned. Her recovery remains to be seen if she’ll ever be more than Bill and Hillary Clinton’s daughter given the garbage she has to carry with it.

I don’t know why chelsea isn’t having a democrat approved abortion by planned parenthood in of their ghetto offices. She’s contributing to globull warming bringing another CO2 machine to life. As we all know, humans are the biggest contributors to globull warming per the democrats.

Live up to your democrat philosophy chelsea. Practice what you preach. (Ok, that joke is almost as bad as the Not according to daddy above).

For Chelsea “can’t keep a job” Clinton, when money talked her integrity walked.

Didn’t she earn a doctorate degree at Oxford? I would count that as an accomplishment.

I’m sure she did just as much actual work at university as she did at NBC for 600k per year. You don’t think they’d fail her under any circumstance, do you?

Being a student is a a far cry from actually accomplishing something, gd. If you have the money and the time, almost anybody can get a PhD (especially nowadays). Just look at Melissa Harris Perry.

Webb Hubbell would be proud

“Democrats have almost universally panned the attack, believing it to be ineffective and a misuse of her talents.”

Talents? She has talents? Who’d a thunk?