Knocks it out of the park 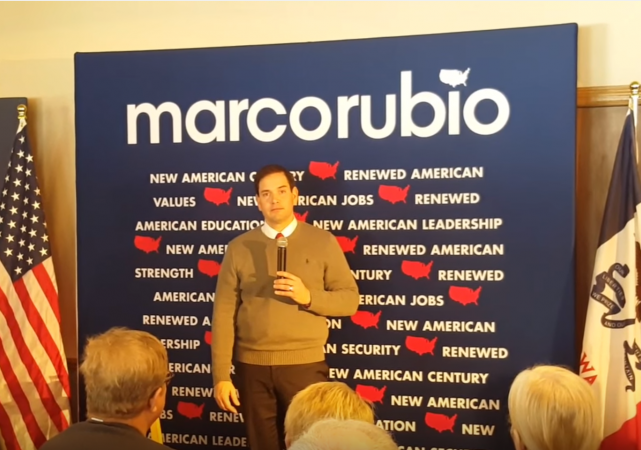 When asked, Marco Rubio is not shy about sharing his faith (see here and here). Sen. Rubio is Catholic.

Referencing one of Rubio’s latest ads, Scott explained there was concern in the non-theist community that Rubio was running to be “Pastor in Chief.”

I’m gonna share my faith especially when I’m asked because my faith influences who I am and every aspect of my life.

First of all, I believe you can’t really understand America, unless you don’t understand — if you don’t believe that Judeo-Christian values influenced America, you don’t know history. I’m not saying you, I’m just saying this nation was founded on the principle that our rights come from our Creator. If there’s no Creator, then where did your rights come from? And so, that’s why it’s important for us to understand that.

…Not only am I influence by my faith, but it is the single greatest influence in my life. From that I’ll never hide.

For all his political faults, it’s a breath of fresh air to watch a person speak without resorting to grade school vocabulary one-liners.

Good answer. That is all.

Who in the race uses grade school vocabulary? Are you referring to that guy whid da NYC values?

Good for you Sen. Rubio, I still don’t want you to be president, but standing strong in the Lord will always get a nod from me.

LOL! you are the ONLY PERSON who thinks anything Rubio spews falls in the “knocks it out of the park” category.

It sounds like he’s intimating at the end that his faith gives him an obligation to open the doors of the United States to illegal immigrants.

He still was involved with the gang of eight. Everytime that I hear him talk, I get the feeling that he is not being honest. He may be a good Senator, with experience, but not ready for the big chair yet.

I saw the clip elsewhere, and I wish you had published the entire transcript. It was about 4 minutes, and what he said after the quote above was also excellent and useful.

The whole quote would have been worth it.

i get it now, it explains a lot…
MEN wrote the bible and MEN wrote the constitution. WITHOUT AMENDMENTS women nor blacks could vote because their god doesn’t even consider women or blacks as humans.

NEITHER GOD NOR THE MEN WHO WROTE the document outlining MENS rights in america never intended for me as a female to have rights.

Mankind was the subject of rights in the Constitution and it includes inalienable rights for both men and women.

The beauty of the founding documents is that they were written to limit and only grant government powers without the presumption of taking such things away. Perversions of founding law have led to many of the political quagmires we found ourselves in throughout history. Unsavory individuals used government as a tool to oppress when their powers were to be limited only to explicitly granted rights.