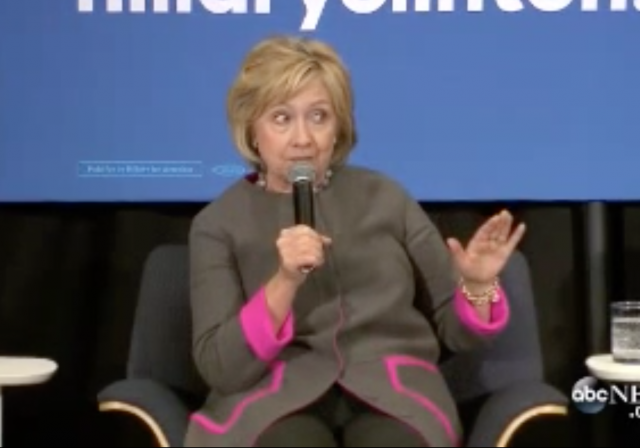 This latest investigation centers around the security of Hillary’s home-brewed email server used during her tenure as Secretary of State.

Understanding these companies’ roles in providing software and services to maintain former Secretary of State Hillary Clinton’s private email server is critical to improving government cybersecurity standards. A high profile government official deviating from established information security requirements raises significant concerns. The sensitive nature of the information stored on Sec. Clinton’s private server created a unique challenge to ensure all of the information was properly safeguarded. The Committee takes seriously its duty to ensure the NIST Cybersecurity Framework is properly equipped to safeguard our nation’s information.”

Earlier this month, the Committee held a hearing where a private sector cybersecurity expert told the Committee his company would not set up a private server for a government official because such an arrangement is “illegal” and because it would expose classified data.

Last year, more than 178 million records on Americans were exposed in cyber attacks. According to the Government Accountability Office, in 2014, federal agencies reported more than 60,000 cyber security incidents that exposed personally identifiable information.

Moreover, the State Department scored only a 42 out of 100 on the federal government’s cybersecurity report card. This score is lower than the Office of Personnel Management’s score, an agency that recently experienced an attack that exposed the private information of 20 million Americans.

In his letters today, Chairman Smith requests all documents and communications related to Secretary Clinton’s private server as well as information about any security breaches that may have occurred during her tenure.

Clinton’s campaign is calling the investigation a “sham,” according to The Hill.

“Clinton’s campaign is calling the investigation a “sham,” ”

That is a very weak response for the ever-attacking Clintons. They must be getting weary.

More theater. Next summer she’ll be listing all the investigations that found nothing. She can add this one.

From the responses, I guess I should be more clear. I’m not defending HRC. I just suspect that she’ll walk. Laws apply only to little people and conservatives.

“Clinton’s campaign is calling the investigation a “sham,” according to The Hill.”

you made a spelling error …

Clinton’s campaign is a “sham,” according to The Hill.

She an evil person, and even an electorate stupid enough to elect Obama twice is starting to catch on.

Actually, I find myself in the strange position of agreeing with Hillary on one point. The investigation IS a sham. There is no one of either party in Congress who has any intention of finding anything, proving anything, or charging her with anything. But an investigation is a perfectly legitimate reason to not say anything for the foreseeable future.

The GOP leadership is a sham.

I am hoping hillary gets the nominee…
….she is the weaker of the candidates…

and will be easy to beat, especially if she goes against Trump.

There is so much on hillary clinton that the republican runner can use to damage and derail her. (unless the GOP picks a romney type of canidate who won’t attack his opponent on anything… then that’s the only way GOP will lose)

plus the look on Hillary’s shocked face on election night when she’s crushed would be awesome tho.

All theatre until she’s in jail where she belongs.

All last summer work crews were tearing up the road outside my house. First they cut and excavated old macadam, put in new granite curbs, poured sidewalks … then stopped everything, tore it out, and dug up and replaced something—gas or sewer lines, I don’t know, but whatever they were they were below the new sidewalk and curbs. They then put the curbs and sidewalks back in. Then they tore them up again, without so much as a word of explanation. The road now looks just like it did before all the excitement.

The workmanship was very high-quality, and the crews were helpful and accommodating when I had to access my driveway. But nothing really happened, if you don’t count waking me up at 6 in the morning all summer, and of course burning up a huge boatload of money.

And that’s exactly what this is starting to look like. A colossal stall, all sound and fury, signifying nothing. Really, FBI, as they say down on the corner, it’s long past time to shit or get off the pot.