Hillary has a minority problem 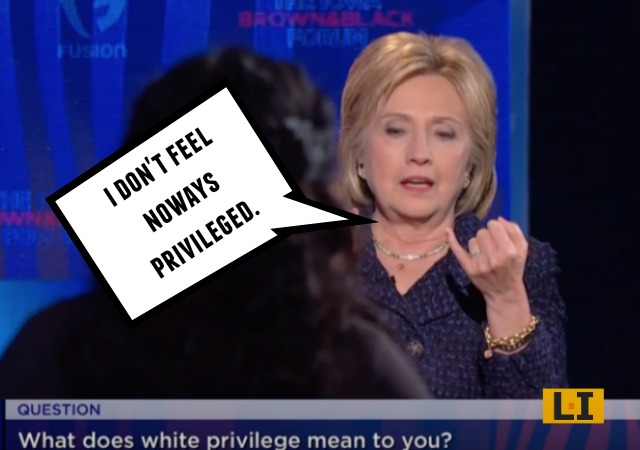 During a Fusion-hosted event at Drake, Democratic Presidential candidate, Hillary Clinton was asked, “Can you tell us what the term ‘white privilege’ means to you and can you give me an example from your life or career when you think you have benefitted from it?”

“Look, where do I start? It is hard when you’re swimming in the ocean to know exactly what’s happening around you so much as it is when you’re standing on the shore, perhaps watching,” Hillary began.

Clinton explained she grew up in a supportive family and went to good public schools. “I never really knew what was or wasn’t part of the privilege, I just knew that I was a lucky person,” she said. “Being lucky was in part related to who I am, where I’m from and the opportunities I had.”

Hillary share two stories about her revelation of white privilege, both experiences she gained from her church.

Among her many struggles this election season, Clinton has had a rough go with minority electorates. From a Kwanzaa Twitter flub, to Hispandering, Clinton has struggled to convince minority voters she understands their world view.

During the Fusion event, Clinton was also confronted about her use of the term, “illegal immigrant,” a term reviled by progressives. Clinton ultimately vowed not to use the term again. Blake Seitz of the Washington Free Beacon has that story:

Clinton was grilled about her past use of the term during a Democratic forum focusing on minority concerns.

“Last November you said the following and I quote: ‘I have voted many times to spend money to build a barrier to prevent illegal immigrants from coming in,’” Fusion TV host Jorge Ramos said. “So first question: would you commit to not using the term ‘illegal’ or ‘illegal immigrants’ in the future?”

Clinton acceded to Ramos’s request and disavowed her earlier comments.

“Absolutely. That was a poor choice of words and obviously, historically I have used ‘undocumented.’ I haven’t used it since and I won’t use it in the future,” Clinton said.

The Democratic frontrunner needs to show she really gets what black and Hispanic voters want—and that doesn’t mean giving your Twitter feed a Kwanzaa makeover.

Hillary Clinton’s minority outreach over the last week has rekindled the idea that she is a candidate who is out of touch, particularly when it comes to minorities. To many of us, her campaign’s insistence that she is an abuela for Latinos and the changing of her Twitter logo to represent Kwanzaa came across as pandering at its worst.

As the leading candidates for the Republican Party continue to stoke racial, religious and ethnic tensions, the Democratic Party needs a candidate who can appeal to minority electorates. Clinton’s recent snafus show a potential vulnerability with her campaign regarding voters that the Democrats cannot afford to lose.

Yet these gaffes also display an obstacle that liberal candidates will face in this election cycle. Minority voters not only want a candidate who understands and appreciates their culture, has the capacity to fight for their causes and create positive change, but also one who can successfully navigate the line between appreciation and appropriation.

Clinton’s recent blog post on her official website, “7 things Hillary Clinton has in common with your abuela,” was intended to show Latino voters how Clinton is similar to their abuela, or grandmother. Yet many Latinos on social media found this outreach attempt to be pandering, or Hispandering, to an important electorate. Many mentioned how her lifestyle as an affluent white American prevents her from understanding and relating to the true experiences of abuelas in America.

This was a light-hearted blog post that was created by Paola Luisi, a Latino staffer on Clinton’s campaign, because Clinton reminded her of her own abuela, but it highlights the difficulties white liberal politicians face in our multicultural society that regularly discusses the dangers of white privilege and white supremacy.

Essentially, Clinton can remind Luisi of her own abuela, but she is not at the point where she reminds the majority of Latinos of their abuelas. Prematurely insinuating that you fill a vital role in a foreign culture will naturally invoke claims of pandering, disingenuous motives, or using the privileges that whiteness affords in America to appropriate or inject yourself into another culture.

In addition to an ever-expanding FBI investigation (or because of it) primary states that were once a lock for the two-time presidential candidate are now polling in favor of self-identifying Democratic Socialist, Bernie Sanders.

Her “privilege” comes from using the power of gov to squash ordinary people, cover up family corruption and white wash immoral and illegal behavior.

Her privilege comes from marrying Bill Clinton. She has been pulled up by his boot straps. If she was not married to good ole Bill we would never have heard of her.

‘Privileged’ is making sure anyone and everyone who could incriminate you is dead.

Drumhellar, Foster, Brown, and scores of others in the decades-old Clinton Body Count Brigade unavailable for comment.

It would have made perfect sense to ask Hillary about the Whitewater scandal instead. White privilege only exists in the fairy tales of the feeble-minded.

She has nothing to lose by shedding her white privilege. She has lots of other privilege where that came from.

I would not want to be the nearest stray dog around when it finally becomes clear to Hill she is not going to even get the nomination.

Thus inspired, I hereby renounce my whitehood, along with my white hood.

Not too fast there buddy boy, you might get “hood” winked.

I had no idea I was a mega-racist with my boot on the neck of minorities and women to protect the privilege my race afforded me at birth, though I’ve remained totally unaware of it.

No wonder I’m so damn tired.

I see that capitulation and raise you one bottle of Wite-Out.

That’s spelled WYTE-OUT! Can’t any of you white privileged types get anything left?

Which has me wondering, can’t I be arrested for checking my white male privilege in public?

Maybe she could try speaking in dialect. That should bring her some authenticity.

“Ah sho’ nuff got me some extry gravy on account o’ me bein’ a little ol’ wot gurl. Mercy, ah am uh-shamed!”

I’ve noticed that since Juanita Broaddrick Tweeted about Bill and Hillary and reporters started asking her about it, Hillary can’t look interviewers in the eye. Can’t help that she’s the subject of two FBI investigation

When Hillary says White terrorists are every bit as bad as Isis, is she talking about Bill’s rapes and his debauchery of underage girls?
I don’t think the Oregon occupation (which is rumored to be a false flag op led by agents provocateur) has created much terror, for example….

It is a “Vast White Wing Conspiracy!” after all.