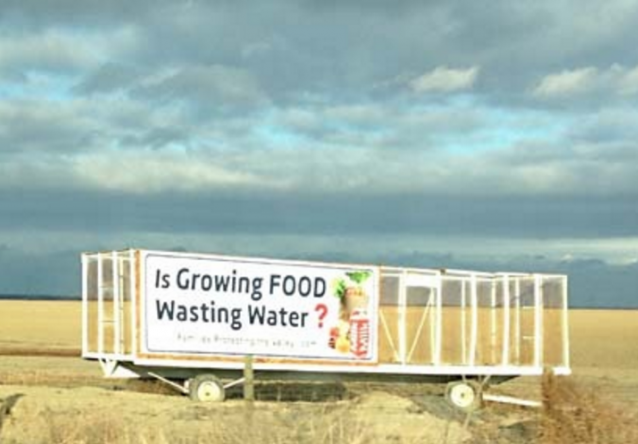 In late December last year East Bay Area regulated utility EBMUD released a list of “water guzzlers”, a naming and shaming strategy the utility adopted in response to the drought that hit the state during the last couple of years.

The local media had a ball with the release, publishing names of offenders and aerial pictures of their property.  Names of celebrity “water guzzlers” graced the headlines.  Although they obviously tried their best, Bay Area journos are yet to perfect the art of naming and shaming.

In the Soviet Union such a list would be accompanied by an expose of how it was really the water criminal Kristi Yamaguchi, not as previously thought Tonya Harding, who plotted to break Nancy Kerrigan’s leg.  Seriously, though, one must feel powerless to engage in this kind of behavior.

A few days later I drove to Los Angeles and was relieved to see that somebody in California has a different approach to water crisis.

Some of you might remember the uproar when in 2008 , allegedly to protect bait fish, Congress cut off water to San Joaquin Valley farms.  In response a local non-profit called Families Protecting the Valley came together to put up signs “Congress created DUST BOWL” next to lifeless orchards and sun-burnt fields.  Those signs, perched along the I5 corridor, which city-dwellers pass traveling from San Francisco to Los Angeles, had the state and the nation talking about the issue.

[Oldie but goldie: some of the original Stop The Congress Created DUST BOWL signs are still visible along I5. ]

This time I saw a new generation of water-related posters pop up; they were infrastructure and drought-related.

“Dams or trains?” it asks in reference to California necessity (and ability) to build new water storage facilities and our expensive (and unlikely to be completed) high speed rail project.

In the opinion of liberal city-dwellers the answer is obvious: trains. In their view since much of California is a desert, we must curtail our water use.

That Western civilization made the desert bloom and that we are not taking full advantage of the Sierra Nevada snowpack, or that we can build desalinization plants doesn’t enter their minds.  Speedrail, on the other hand, sounds futuristic and good for the environment.  In other words, they detest modernity and embrace a return to nature so long as they are shielded from nature’s whims by technology.

On the other hand, San Joaquin Valley asks the question “Is Growing FOOD Wasting Water?”

The answer, it seems to me, is NO, but only if we are not wasting the food.  But our agriculture is subsidized and the price of water is regulated.

While I want to side with the sensible farmers over neurotic, power-hungry cities, I dislike the maze created by governments meddling in agriculture.

Several signs on display together, some of them are in Spanish, which makes sense because so many of San Joaquin residents are of Mexican descent.  But it also reminds of the fact that while water creates jobs in agriculture (a message of yet another poster that unfortunately I wasn’t able to capture), many of these jobs go to illegal aliens.

Still, the answer to the Dams or Trains question should be obvious.  On the one hand, with a growing population and the physical reality of periodic drought, California needs to build reservoirs.  Otherwise we will be reduced to praying to El Ninio, son of Gaia, while practicing ritual humiliation of people with green lawns.  And yet there is little political will to develop water infrastructure.

Just as we need new dams, we do not need Moonbeam’s choo-choo, as anyone who has traveled on I5 can tell you that.

We typically go to LA twice a year and rarely encounter any traffic.  The door-to-door trip down the 4-lane highway with 2-3 stops from the East Bay to the San Fernando Valley typically takes 6 hours.  Air travel takes about the same, taking into account travel to the airport, security screening, baggage claim, etc.; Speed Rail is not going to be any faster.

This time we hit traffic twice, briefly, on our way back.  First was in the Grapevine hills north of LA, because it snowed, and the second in San Joaquin because of a major accident.  Modern technology is pretty good at guiding drivers around the traffic.  And, in any event, this was unusual.  There is no pressing need for an alternative form of transportation between the Bay Area and LA.

Also, isn’t it curious that although we are in a MAJOR drought with gov’t sponsored signs (“Brown is the new Green”) everywhere … there is no intention of evicting the many millions of illegals in the state?
Do those people not use water?
As people often say about carbon guzzling celebs/politicians who tout AGW causes, “If this was a real crisis …”

Anything going on in the other 56 states?

I sure wouldn’t mind having a few species of politicians go extinct.

Illinois provides water for its residents. This keeps them alive and taxble.

Your good photos do not portray the extent of the devastation. We make that drive a couple of times each year also, and we can see the progress of the destruction. There are hundreds of acres of dead trees, all lined up in their neat orchard rows. Later those trees have all been pulled down. Later the land is barren.
We have taken our grandkids on the trip so that they have the destruction well in mind: It is big-government, liberalism, and PCness at its worst.
Thanks for this article.

Quite right. We drove down that way last summer, crossing Lake Shasta. The water level looks to be about 60 feet below the normal line. There literally are islands and peninsulas that shouldn’t be there. I took some pictures from the car (slightly blurry because we were moving; my wife was driving). I’d share them, but I’m not sure how to quickly post them here.

By the way, edgeofthesandbox, I had not seen your posts before: welcome to LI!
As a resident of NorCal, I look fwd to future write-ups.

As a long time resident of CA, it seems to me the state’s democrats want to destroy the state 30 miles east of the coast. No jobs, No water, No money, No cops, No crops. All for the greater good of the coastal communities. The kicker is that despite the state not providing water supplies for the existing population, Gov Brown has rolled out the welcome sign to illegals and wants to make Obamacare open for illegals.

I feel like you’ve missed a major opportunity here to name and shame the biggest water wasters – the government.

I actually happen to live right outside LA. We’ve had a huge rainstorm here the last couple days.

And yet when I drove to work yesterday the city sprinklers on the median in the middle of the road were ON.

High-speed rail is an extravagance; a luxury. Water infrastructure is a necessity. If you have no water, you have nothing, and then who will ride your shiny new train?

Choosing to “invest” in high-speed rail over water infrastructure is, to me, like paying for high-speed internet and 1000 channels for your new house instead of plumbing or working toilets. How long will you enjoy your extravagant internet/television package before the place becomes unbearable/unlivable?

[…] read my post about a new generation of posters along I5 corridor in California over at Legal Insurrection.  Many thanks to Professor Jacobson for hosting it. Dams or trains pretty much sums up California, […]

I’d bet most liberals in California would see the water growing food sign and just laugh.
Every liberal knows food comes from the grocery store or restaurant.

Y’all are a bunch of immoral, selfish jacklegs. Which are more important, humans or delta smelt?

Your use of harsh language is offensive, Mr. Hawkins. The proper highbrow term is “speciesist.” Which is a terrible thing, indeed.

I flew into Fresno the week before Thanksgiving and noticed the local reservoirs were filled with water, which is good, the drought is over for now. Wonder how much corruption is going on with the train, reminds me of this years HBO’s True Detective.

As one who fled the valley in which the photos were taken, I have a couple of observations. Yes, indeed, the “Stop the Congress Created Dust Bowl” signs were a sight to behold. And they were completely ineffective. The input of California residents outside the Bay Area and the LA megalopolis is dismissed, derided, and ignored by those in power. Water, being critical to life, has made it onto the radar screen of the important people of Cali. But I seriously doubt that the Eloi are going to listen to the lesser beings this time either.

Oh, and if you’ve managed to make that drive smoothly every time, congratulations. Don’t ever attempt it during a holiday weekend and hope that you never get behind a crash. Oy vey.

Hey edgeofthesandbox, I just noticed your bio and that you are from Kharkiv. I’ve been there twice, in the winter, a couple years ago. Really loved the place. A bit too cold for me however…

I often visit the San Joaquin valley to meet with the produce farmers and processors. I guarantee that 90% of this nation have eaten the food they process. The list of brands that they supply is incompressible.

These aren’t some evil corporate minded figure heads. These people are really struggling to water their farms and keep these plants in business. Most of the farms I drive by have large wells and aqueducts to distribute the water to their crops. Even THOSE farms are barren fire hazards as the water table has dropped beyond the reach of their wells.