While Obama was in Paris, Obamacare had a “Marie Antoinette” moment!

While Obama was in Paris, Obamacare had a “Marie Antoinette” moment! 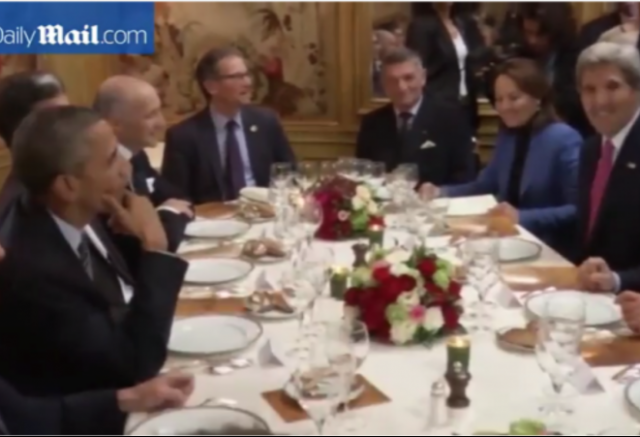 President Obama continued his “Apology Tour” during the Paris UN Climate Conference, by demeaning our nation once again:

Obama sang from the same hymnal on Monday, telling an assembly of world leaders that a future of environmental devastation ‘is one that we have the power to change right here right now but only if we rise to this moment,’ according to a White House press pool report.

‘I’ve come here personally as the leader of the world’s largest economy and the second largest emitter to say that the United States of America … embraces its responsibility to do something about it.

After deriding American productivity and lifestyle choices, he headed out with the other big government elites to a”three-Michelin-starred temple of gastronomie in the Marais neighborhood” for a…working dinner!

Obama enjoys grand cuisine while regular Americans are advised to eat tofu turkey to prevent climate change. The conference will last until December 12th, so there are nearly 2 more weeks of this banality to cover.

I will have to pace myself.

Constable notes that the queen’s reputed comment, “Let them eat cake“, is reminiscent of news earlier this month about the so-called Affordable Care Act and the fact that a healthcare insurer may pull out of the ACA exchanges after 2016, citing low enrollment and poor economics.

I’m not against corporations making a profit. Indeed they should because ultimately that’s what creates jobs. What I am against is having laws created in favor of certain types of companies who actually have no obligation to provide the services that the populous must purchase.

The optics of any health insurer opting out look astonishing like that “let them eat cake,” moment of the 18th century. For the government to ignore that this is a problem at best looks out of touch. At worst it looks callous.

We have reported about the rapidly escalating costs of health insurance, due to Obamacare requirements, as well as the collapsing state exchanges leaving many Americans uninsured.

Now, one of the architects of Obamacare admits it is not working as advertised:

“Even though I am a liberal, I think we really have to focus on cost control. Affordability is absolutely critical across the board, because if we don’t have affordable plans we are not going to get universal coverage. They are intimately linked,” said Emanuel, brother of former Obama chief of staff Rahm Emanuel, who’s mayor of Chicago.

He did acknowledge: “We’ve overplayed the high-deductible plans. People are feeling this is less and less insurance. And just more and more, ‘I’m paying out of my pocket.'”

The more people pay for health insurance, the less disposable income they have for Christmas gifts.

…ShopperTrak reports total sales on Black Friday crashed 10% to $10.4 billion. While blame has been placed on early opening on Thanksgiving, that is false too since spending on that day also plunged 10%. So, the sales news is unequivocally bad – which is hardly surprising given the collapse in consumer confidence.

Zero Hedge’s Tyler Durden also has this graph to summarize this point:

One gift that I will appreciate next holiday season is knowing that Jan. 20, 2017 will be just around the corner, when Obama’s “Apology Tour” will officially come to an end.

Zeke’s emphasis to “Focus on cost control” is ominous in itself. Zeke was noted as saying its better for society to devote its resources toward the pregnant thirteen year old rather than the sixty five year old, since the sixty five year old has lived most of its life anyway.
With Zeke in charge, how far is the US away from repeating the railway selection platforms of Auschwitz with the country’s senior citizens?
Hitler was just a pragmatic politician, with that tentative first step onto a slippery slope trying to balance Germany’s financial needs and resources with the burden of universal healthcare, caring for all those crippled WWI veterans, the insane, and handicapped in the face of mandatory WWI reparations to the Western Industrial Democracies and a worldwide economic depression.

Picking his nose in public:
http://www.freerepublic.com/focus/chat/2460243/posts?page=45

And that’s just the filthy part. Then of course, there’s the traitor thing.

A clip of Obama explaining- to Parisians! -that only in the US are there mass shootings.

There are lots of pictures of these dinners and luncheons.

Look at the faces of the “global leaders.” See how gravely concerned they are about the climate.

And, “working dinner”? Please! I’ve been to many a working breakfast, lunch, and dinner, but have never seen one where NOBODY is reading, checking a laptop, using a pen, or doing nothing but laughing, drinking, and having a good old time.

Just a month ago I was at a working meal where a lot of work was, in fact, done. When I got there at 5:15 pm the table outside the computer training center was stacked with deli boxes marked turkey, ham, beef or vegan. Each box contained a plastic wrapped sandwich, two condiment packets, salt and pepper packets, a bag of chips, a plastic wrapped cookie, a can of soda, a paper napkin and a foil wrapped wet wipe. Linen tablecloths and napkins, real flowers, sterling silver flatware, fine china and the appropriately shaped crystal glass for each of the various wines to be served were nowhere in sight.

I have also been at “working dinners” at the American counterparts to a restaurant like L’Ambroisie, where the average cost for a single meal is estimated to be close to $400. As with your experience, little to no work ever got done at those dinners.

The more al-Chicagi be-clowns himself, the more ammunition this country gets to finally elect another Ronald Reagan.

Problem is, NONE of the candidates running for office are worthy enough.

First of all, price controls for drugs and doctor services are already in the ACA…

Listen to Dr. Gottlieb in this interview…

Secondly, Paul Ryan is making a deal to fund the shortfall in the “risk corridors” in return for a delay of the Cadillac tax…

BTW, now that we got rid of that backstabbing cowardsly scummy sell-out Boehner, what is Paul Ryan doing with himself – and with our country?

So I have a house that I can afford only because I got a stupidly low interest rate and I just had to replace the old clunker of a car I drove. My wife lost her job and can only find a low paying one to replace it and my hours were cut so that I did not work more than 30/week. On top of that, my son has moved back into the home. We are struggling badly and now this wonderful, benevolent government tells me that either I obtain insurance that costs $500/month with an $8000 deductible or I have to pay a fine of several thousand dollars – neither of which I can afford. Perhaps this benevolent government of ours that blessed me with such wonderful insurance coverage that I cannot afford to use could now tell me where I am going to find the money for Christmas presents. If I am lucky, I might be able to give my wife a new pair of socks for the holidays.

Careful now…. Owning too many pairs of socks might incur the wrath of Crazy Uncle Bernie!

Reagan was right. Government IS the problem. How long will it take to walk back the rules and regulations put in place by this America hating president?

Ever since his ascendance to the throne (the royal Presidential one, not the porcelain one), I’ve referred to Honolulu Barry as Ozymandias-on-the-Potomac. The parallels are, sadly, only too similar. I’m eagerly awaiting the day when his only remaining legacy (all pun intended) will be “two trunkless legs of stone” left standing amidst the swirling sands of history.

Obama doesn’t like our lifestyle choices. How long will it be until the extreme environmentalists insist we have an environmental police force? A force empowered to enter our homes, check our thermostats, determine what types of cars we can drive, and even where we live (mostly in dense urban cities), an environmental gestapo. Coercive measures to enforce their view of what is good for the planet. This elitist president will obviously never learn that it is his job to accept the choices the people make, not dictate them.