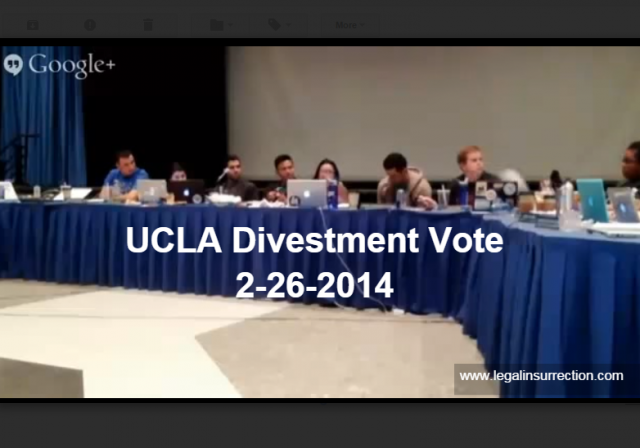 On Tuesday night, February 25, 2014, I stayed up late watching the live stream of the UCLA student council debate over an anti-Israel divestment resolution.

It was one of many such resolutions on campuses at a time when groups like Students for Justice in Palestine were in an aggressive posture, particularly at UCLA. A guest author familiar with the UCLA campus scene wrote about the tactics being used against pro-Israel students, UCLA testing ground for next generation of anti-Israel campus tactics.

At some point early in the morning the next day, I called it quits. Given the 3-hour time difference, it appeared the event would go on well into the early morning hours. I went to bed figuring I’d find out the result in the morning.

Sometime around 9 a.m. on February 26, 2014, I logged onto the computer, went to the live stream, and it was still going on, and the vote was about to take place. I watched the divestment resolution go down to defeat:

After an all-night session, the UCLA student council defeated an ant-Israel divestment resolution by a vote of 7-5….

The vote received enormous attention, and was trending in the U.S. on Twitter.

The camera continued to operate for a couple of minutes after the vote, and carried live an epic meltdown by one of the pro-divestment students, who was not on the council but a council note-taker.

I had someone download the video segment and posted it, Video – UCLA student melts down after anti-Israel resolution defeated.

The video went viral. I never identified the student, but others did, including the UCLA student newspaper. And she caught major flak, something I felt bad about even though her reaction I posted was part of a news event, broadcast live, and done in a very public forum.

I’m comfortable telling her name now because she has gone public in an interview with Ruthie Blum at Alegmeiner, UCLA Student Whose BDS-Defeat ‘Meltdown’ Went Viral ‘Deeply Regrets’ Actions; Says Israel Is Great :

A University of California Los Angeles (UCLA) student whose angry outburst following the defeat of an anti-Israel vote went viral on the Internet has had a chance to educate herself better, she told The Algemeiner this week, after requesting an opportunity to express her change of heart.

“I don’t believe Israel is evil,” [name removed 10-25-2019] said. “In fact I think it’s a great progressive country that offers a lot of freedom for its citizens.”

[name removed 10-25-2019], originally from the Philippines, was seeking to set the record straight about an incident that occurred in February 2014 during a meeting of the student council, where she still serves as a minutes-taker.

[name removed 10-25-2019] said she was shocked by the angry response her disappointment generated, which was reflected in comments circulating on the web, and in hate mail and even death threats she received.

“I was depicted as an antisemite upset that divestment didn’t pass,” she said. “But that’s not the case at all. I deeply regret my poor choice of curse words. And I now understand that Jewish communities misinterpreted my intentions and felt attacked. I never intended to hurt anyone.”

[name removed 10-25-2019] explained that she had known very little about the Israeli-Palestinian conflict, the BDS movement or SJP, and that the real reason for her tears was the “apathy” of the student council to the proceedings.

Read the entire interview, but here’s one more piece of it:

One of the things she said she has learned about is antisemitism – “a negative perception of Jews that can be manifested physically or verbally toward Jewish individuals, property, religious facilities or their respective communities. Furthermore, I understand that antisemitism manifests itself with regard to the state of Israel. Criticism of Israel, demonizing Israel, blaming Israel for all inter-religious or political tensions, applying double standards towards Israel, or delegitimizing Israel are all forms of Jew-hatred. It is not only illegal but immoral to target a historically oppressed Jewish minority that has a collective right to self-determination and essential human rights.”

There have been other distrubing incidents at UCLA since then, such as the challenge to a student running for the Judicial Board on the ground that she was Jewish.

But the campus has seen a backlash against these SJP tactics. Last spring, the anti-Israel student slate of candidates was resoundingly defeated and its key members lost their positions in student government.

For me, [name removed 10-25-2019]’s evolution on Israel is a hopeful sign that the anti-Israel venom on some campuses will not last, and that students drawn into it for all the wrong reasons will see the truth through learning.

There was a reason the voting age was 21.

“When I was 18, I was amazed at what a fool my father was. Now I am one-and-twenty, and equally amazed at how much the old man has learned.” – Mark Twain

“The best thing about freshmen is they become sophomores.” – Al McGuire

Yea, if I heard “Like” one more time, I was gonna try to hunt her down and teach her how to speak.

What a laughably transparent lie she’s telling – on top of the non-apology that basically consists of, “I’m sorry you were too stupid to understand me”.

Seriously. They apparently debated THROUGH THE NIGHT on this issue, and she claims that she was mad about the ‘apathy’ on the issue? How stupid does she think we are?

Just another POS progressive throwing a tantrum when she didn’t get what she wanted.

Someone needs to park a van next to her apartment with speakers on the roof blasting white noise at 120 dB 24 hrs a day.

How is it that

“she had known very little about the Israeli-Palestinian conflict, the BDS movement or SJP”

Yet she is in tears when the BDS Divestment was rejected. It doesn’t make any sense. How is it that someone can be so ignorant about something, yet invested in its passage?