Video of UCLA anti-Semitism removed, but we saved it

Video of UCLA anti-Semitism removed, but we saved it

Israel boycott supporters on Student Council question whether student applicant could be fair even though Jewish. 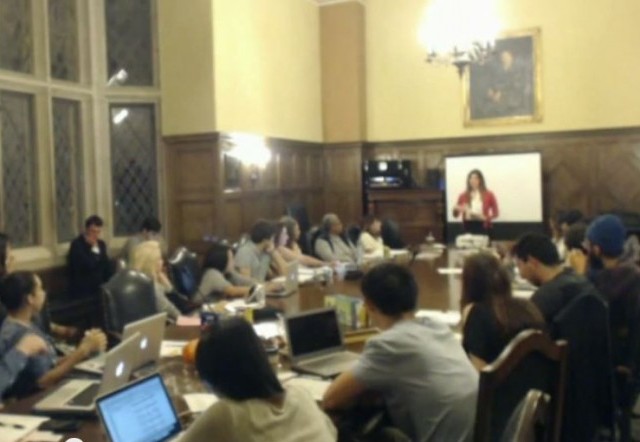 One thing I’ve learned over the years is to screen shot, save on Wayback Macnine, or download any key evidence found on the internet.  Too many times I’ve gone back to a link and it’s gone, and Google Cache can’t be counted on to have preserved the evidence.

So when I learned in early February that a UCLA student applying for a student judicial board slot was questioned by the Student Council as to whether she could be fair because she was Jewish and involved in Jewish groups, I wrote it up, UCLA student gov’t candidate challenged for being Jewish (February 12, 2015).

I also downloaded the over 4 hour live feed, and excerpted the approximately 40 minute segment, which I uploaded to YouTube.

As mentioned yesterday, discriminatory questioning of the Jewish student by the UCLA Student Council has gone national, Mainstream media wakes up to BDS-Anti-Semitism connection.

It’s a good thing I saved the evidence, because the Student Council took down the original live stream video, as HuffPo explains, UCLA’s Student Council Tries To Hide Video Of Its Members Questioning A Jewish Student (emphasis added):

The university’s [Undergraduate Students Association Council] typically posts recordings of its meetings on YouTube. But the student government took down the footage of a Feb. 10 meeting where several students questioned whether Rachel Beyda, a Jewish candidate for the school’s judicial board, could be “unbiased” given her religion.

Various news reports on the controversy this week prompted the hosts of MSNBC’s “Morning Joe” to call on the university to put the video back online Friday. But the university told The Huffington Post that the decision to pull the video was made by the USAC’s internal vice president’s office….

The group StandWithUs, a pro-Israel education and advocacy organization, is circulating a clipped video of the controversial meeting. Legal Insurrection, a conservative blog, has uploaded the full video of the meeting as it pertains to Beyda’s nomination.

The networks are using our video as their source: 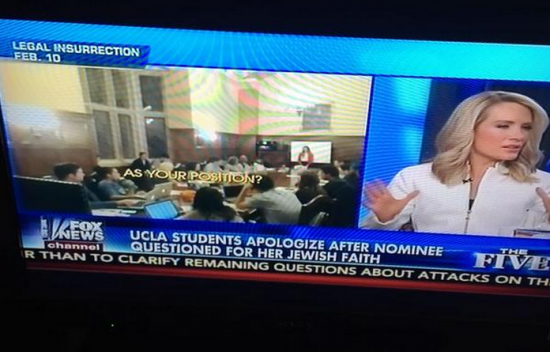 I love when this happens.

I see that of the 4 students who attacked her, 2 are muslims and 1 is a Sikh. About the one who took the lead, Fabienne Roth, I found nothing. Can anyone map out the UCLA politics and tell me if that means something?

Always nice to get some free publicity, even better to be the only remaining source of a meeting like this.

Have they tried to DMCA you on it yet?

As I see it, Prof. Jacobson and the entire LI crew have _well earned_ all this publicity, and much more.

Proud to be a (tiny) financial supporter of this influential blog. Bravi!

“The price of freedom is eternal vigilance.” Good work Prof.

During the Iraq war, I advocated giving every grandparent a cell phone, because the cell phone is a weapon. Screen shots and downloads work the same way.

Oh, and let us not forget translations. http://middleeast.about.com/od/palestinepalestinians/a/me080106b.htm

The enemy is out in the open, it is a real enemy, not any legitimate version of loyal opposition.

I would push for one step further. The above article includes only the names of organizations, and not people. And yet, the organizations are made up of people, and there is overlap among them. Find the overlap, and you find the source of more than one problem.

I am less concerned about the infant tyrants among the student bodies than the adult parasites feeding at the University trough and using their alleged professional time to do evil.

Names, names. Be sure to post the names, when you can get them. The bigots need to be called out by name. Strip the organizational masks off these bigots.

At least one of these names appeared in a prior Legal Insurrection post, and that is a good thing.

congrats on the recognition, and the diligence it took to be noticed.

kinda long rant, just read the bold for the gist

One of my few Facebook longtime friends is a 70’s Berkeley grad, from a well off family in upstate New York. He’s spent most of his adult/business life around Europe/Africa/Middle East, where he still resides.

Despite his business experience and education, he still believes “Zionists” are behind 9/11, and behind about every bad thing globally. I can “shoot down” 20 of his goofy arguments like his recent “where’s the plane” in the Pentagon crash, or the Paliwood baloney, yet he is steadfast in his core belief, and can’t see why I can’t see it.

On the globalist mega bank cabals like Goldman Sachs influence, I’d agree there is undue influence on our government in outlays like TARP, but I can’t get him to pin down how that is only Jewish/Zionist bankers. And Soros for example, is Jewish, but dropped SodaStream apparently in support of the BDS movement.

I think Romney had it right, that Russia is (still?) our greatest geopolitical enemy. The communist influence moved into the US in the 50’s and McCarthy was made the bad guy, as the Democrats/communists took control of Hollywood and the MSM and now campuses. Dem’s delivered Vietnam to the commies AFTER we had won, and hippies spat on our returning troops.

Perhaps the way to discern the “westerners” from the “collectivists” on a nation level is by seeing who is backed by Russia, and who stands with the west. Obama’s red line meant nothing in Russian backed Syria, and he has worked to deliver half of Iraq to Russian backed Iran. Obama won’t arm Ukraine or the Kurds. It’s almost like Obama’s Russian backed mentor Davis, and his Russia backed Sandinista lover Rev. Wright, or his Russian backed Cuba/Venezuela friends … have influenced him.

Inside the US the leftists seem backed by communists, whether they know it or not. They think Mandela is awesome, (as he went back to S Africa with his Soviet friend, singing about killing white farmers). They think Bush is Hitler for supporting Israel. They think Green Energy is awesome, despite the commies behind the “Green groups”.

But in the US I find myself more pro-Israel than many Jewish Democrats, which is a conundrum. Ben Shapiro has a video that perhaps helps explain why so many “Jews” are so far left, and two thirds support the likes of Obama.

Maybe this is already obvious to the more conservative Jews here, but this doesn’t look like a religious thing to me, exactly. They are anti-Israel because they are anti-American, pro-communist/progressive. Being a Sarah Silverman Jew is fine to them, it is those trips to Israel that raise concern. As Netanyahu pointed out, it is free America that is their Great Satan, Israel is just a stepping stone. At its root, the BDS movement is against traditional Christian America, whether they recognize it or not.

In Europe there is deeper anti-semitism perhaps, but their real problem is they’ve multi-cultied themselves to death, importing masses of Islamists that put religion above any loyalty to nation. Their culture is being devoured, and it is not by the Jews. Jews are first on the jihad hit list, but no westerner is safe, and debts are soaring.

Lastly, if we make it two years without war, and Israel has to go it alone without support from a Queen Hillary, do they decide they need Russia to have their back? Flexible Obama certainly seems to be moving the chess pieces in that dystopian direction.
http://observer.com/2015/01/borscht-belt-will-israel-spurn-america-for-russia/

“Haq said the hate mail she received in response to her questioning at the meeting was so severe that she did not feel safe walking around campus.”