Posted by William A. Jacobson Friday, December 4, 2015 at 10:15am 3 Comments
More Sharing Options

Matisyahu is the American Jewish reggae musician who has been targeted by the anti-Israel Boycott, Divestment and Sanctions (BDS) movement.

Last summer, BDS managed to get Matisyahu banned from the Spanish Rototom Reggae Festival after he refused to sign a statement renouncing and denouncing Israel. Matisyahu, believed to be the only Jewish musician scheduled to perform, was the only musician asked to sign a political statement in order to appear.

After denunciations of the ban as religious discrimination by the Spanish government and a leading Spanish newspaper, and an international outcry, the Festival organizers apologized. Matisyahu was reinstated and performed on the main stage.

Matisyahu also is the target of a BDS group in Ithaca, NY, where he is appearing tonight at the historic State Theatre, as part of a world tour.

The BDS group, calling itself The Ithaca Committee for Justice in Palestine, has been a focus of controversy because of its outlandish tactics. A protest plan against Matisyahu was first announced a couple of weeks ago, and confirmed this week.

A counter-protest in support of artistic freedom appears to be in the works:

Untrue statements are being spread by the Ithaca Committee for Justice in Palestine about Matisyahu to justify their discrimination against him. Because he is a prominent Jewish artist who refuses to take an anti-Zionist position, BDS (boycott, divestment and sanctions) supporters around the world are attempting to block his cultural and artistic expression.

Local residents are also voting with their feet and pocketbooks.. The concert tonight is heavily booked according to the State Theatre’s website (though tickets are still available): 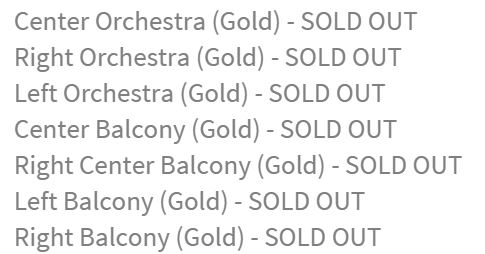 These BDS protests come against a backdrop of violence directed at Jewish targets in Europe. Dozens of people were murdered at The Bataclan Theater in Paris. The Bataclan, which until recently was Jewish owned, had been a BDS target for years, though the connection between that BDS targeting and the decision of the Jihadis to target the Bataclan is not yet proven. The mass shooting by someone who appears to have been acting as a Jihadist in San Bernardino also heightens concerns for public events.

Legal Insurrection has learned that the State Theatre plans to have security at the Matisyahu concert tonight both outside and inside the theater. The Ithaca Police also will be present. In addition, a metal detector is being used and all concert goers will be required to undergo that screening.

I reached out to the State Theatre for comment, but have not received a response as of this writing.

The irony of these security precautions is that Matisyahu is known for his support of peace and understanding. His “anthem” is the song One Day:

Sing this at the BDS protestors when they show up: “Turn your feet around, love to hear discussion.”

BDS targets a performer who sings about peace. They hope to persuade and change minds?

They’re like a drunken Bigfoot stumbling around in a yard full of rakes.

What’s not to love about this description: “American Jewish reggae musician”. Sing on, Matisyahu. We’ve all got your back.