I reported on November 22, 2015, that local Ithaca, NY, anti-Israel activists were objecting to the appearance of American Jewish reggae musician Matisyahu, Anti-Israel boycott movement targets Matisyahu again. The appearance is scheduled for this Friday night, December 4, 2015.

That post had the history of how Matisyahu has been singled out for Boycott, Divestment and Sanctions (BDS) movement scorn because he is an American Jew who refuses to renounce and denounce Israel. In fact, Matisyahu has expressed support for Israel’s right to exist and has come out against media demonization of Israel.

That makes Matisyahu a marked man by BDS, and led to cancellation of his appearance last August at the Spanish Rototom Reggae Festival. The ban was reversed after a public outcry and Spanish government and media denunciations of religious discrimination.

I also detailed how the local protest was organized by the same core group of people who organize just about every anti-Israel event in the Ithaca area, particularly Ariel Gold.

At the end of my prior post, I noted:

After the Greenstar [Food Coop boycott] battle, this is shaping up as the next big BDS battle in Ithaca, and likely will obtain national attention.

But this time it’s not “pro-Israel” versus “anti-Israel.” It’s pro-artistic freedom versus political litmus tests for musicians and artists.

But I didn’t know if they really would follow through and claim Matisyahu should not appear in Ithaca and protest at the concert.

But yes, they are going to do it as just announced on a Facebook Event Page for the Ithaca Committee for Justice in Palestine.

The same tired and false accusations made against Matisyahu in Spain last August are repeated by the Ithaca activists:

This is the Flyer they intend to hand out: 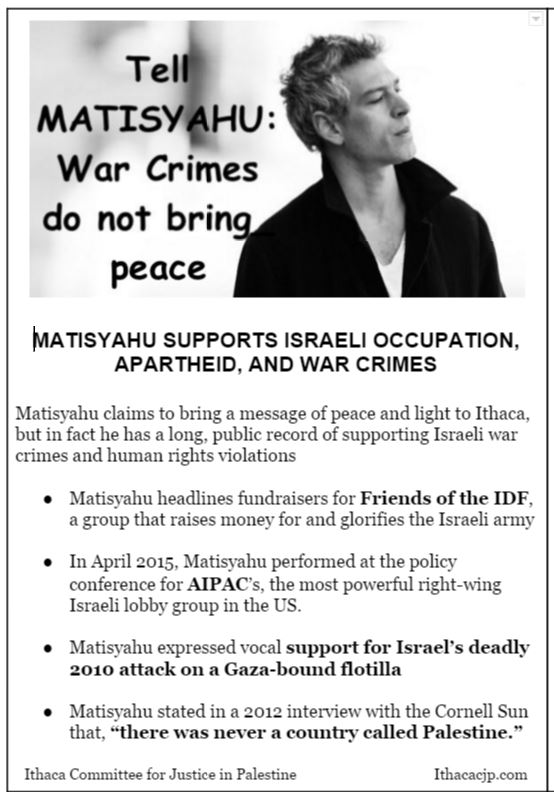 The accusations are plainly false (most of them) or just stupid (like criticizing Matisyahu for saying “there was never a country called Palestine,” which obviously is a true statement.

These false accusation were debunked at Vox.com last summer. Vox is hardly a “pro-Israel” website, and is left-of-center, but even they were having none of it and saw this as veiled anti-Semitism and denial of Israel’s existence (emphasis added):

You might get the sense from all this that Matisyahu is an outspoken champion of the Israeli occupation of the West Bank. In fact, he goes to some lengths to avoid discussing politics, and particularly the Israel-Palestine conflict, on which he has resisted taking a position. The fact that this alone got him booted from the Spanish music festival is significant for this episode.

Occasionally, a reporter will press him into discussing Israel, and typically Matisyahu will respond in a way that suggests sympathy for Israel but also a very strong desire to remain apolitical. In 2010, for example, he lamented what he called “one-sided” media coverage of the raid on a Gaza aid flotilla by Israeli forces, which killed 10. When the reporter asked him if he was a “militant Zionist,” Matisyahu responded, “No. What does that even mean? That’s getting into bigger questions, and I’m not going to do that. I’m a musician. My whole purpose is to bring people together; it’s not about focusing on negative stuff.”

Similarly, in 2012 he told the Cornell Sun in an interview that “as far as I understand, there was never a country called Palestine.” It was a bizarre thing to say and understandably offensive to Palestinians. But he appeared to be speaking historically about a Palestinian state, not ideologically about the existence of Palestinians as a people. And, more to the point, he hastened to add, “I’m not going to claim that I have the answer or the truth or the right knowledge. I’m a singer. … I have no answers as to who’s right and who’s wrong, and how we should deal with such huge issues that go back so far.”

The point is that if you look at what Matisyahu has actually said, yes, he has at times suggested a vague sympathy for Israel, but it’s clear that his overwhelming view is that he is apolitical and doesn’t think it’s his business to weigh in.

Yet the BDS campaign against Matisyahu claims he supports “apartheid and ethnic cleansing.” Why? Given the scant evidence, it looked like the BDS chapter had concluded this based in part on Matisyahu’s religion, and an assumption that Jews necessarily support all Israeli policies unless they prove otherwise. It’s not a standard, after all, that non-Jews are being held to.

At the same time, the hostility to Matisyahu also seemed to reflect a belief that showing any support for Israel or Israelis is tantamount to complicity in all Israeli actions. That’s an odd standard, given that many Americans can oppose certain US policies, such as drones or the Iraq War, without opposing the existence of the United States itself.

That standard starts to make more sense, though, if you think that not just Israeli policies, but the existence of Israel itself, is the problem. And indeed that is the position of some, though certainly not all, within BDS.

Meryl Yourish also ran a fact-check on the accusations against Matisyahu. Here is a portion:

I support peace and compassion for all people. My music speaks for itself, and I do not insert politics into my music. Music has the power to transcend the intellect, ideas, and politics, and it can unite people in the process.

Matisyahu appeared onstage at the 2015 AIPAC conference. So did Rita Jahan Foruz, David Broza, Joel Chasnoff, and JewKvox. Now, we’re not Matisyahu’s manager, but we’d bet dollars to doughnuts that AIPAC paid Matisyahu to perform. Because that’s how concerts work.

Matisyahu did play at a star-studded benefit for Friends of the IDF, an organization that was founded in 1981 to support and supply services to IDF soldiers and their families. Their mission statement:

IDF initiates and helps support educational, social, cultural and recreational programs and facilities for the young men and women soldiers of Israel who defend the Jewish homeland. FIDF also supports the families of fallen soldiers.

Raising money for soldiers in need of financial assistance, supplying religious items to Jewish soldiers, helping bereaved families cope with their losses, or helping with the educational costs of a soldier is hardly supporting the military. FIDF supports the inviduals beneath the uniform. The FIDF is a private, charitable organization that supplies these services and more to individuals–not the IDF.

By the way, Matisyahu last played at the FIDF concert in–wait for it–2007. If the BDS crowd has to reach back eight years to find something to use against him, then they’re really doing it wrong.

Prediction: The BDSers make fools of themselves again. But not without making noise and proving why they fundamentally disrespect both opposing viewpoints and the freedoms we hold dear.

How appropriate that this all is happening on the day we found out that another BDSer, Dr. Martha Levine, refused to answer a science question from a 13 year old, because the 13-year old was an Israeli Jew.

I know this post was about Israel, but I think you need Fascism tag and theme (similar to Branca’s gun stuff) for all the incidents of people getting their lives ruined for alledgedly politically incorrect speech.

This is a very dangerous theme that is growing like wild fire. While it started in the more anarchist elements on the left its now getting to be mainstream.

Any dissent from their view points can cost you your job and put your life at risk. This is no longer political geek territory- its getting to be the early stages of the cultural revolution.

Well, that’s what fascist do.

BTW, the Muslim attacks in Paris was kristallnacht II:

I wouldn’t give a rat’s rear if he had supported everything in the flyer. If invited, he has a right to appear and perform his music, and this “Committe for Justice”, etc. can go take a flying leap. If they don’t want to hear him, there’s a simple answer: don’t go to the concert. Otherwise, (bleep) off.

How many in the BDS crowd suport Hamas, Islamic Jihad, and Hezbollah? What do the think of the Muslim knife attacks occurring in Israel? What is their opinion of ISIS?

BDS is Muslims, with cover provided by self-hating Jews and Communists, poisoning American institutions and undermining our civil society with their virulent Jew-hatred. They will not rest until they have subverted everyone to raise a hand to kill all Jews wherever they are found.