The Anti-Israel Theater of Hate

The Anti-Israel Theater of Hate

If the traditional racist stereotype of the Jew is greedy, ruthless and cunning, wait till you meet the Zionist.

Galway, Ireland. They stood huddled in the corner of the lecture theatre whispering ominously. A final pep talk perhaps, or a hasty revision of tactics.

Then the leader surged forward, arms flailing, voice bellowing, clad in the colours of Palestine. ‘Get the f–k off our campus, now, you f–king Zionist, f–king prick,’ his body literally convulsing with rage. His acolytes obediently pounded the desks in wild approval. ‘We don’t want your Israeli money around here.’

Professor Alan Johnson, a respected political theorist and one of British Labour’s most astute thinkers, stoically continued his address, speaking in his characteristic soft, measured, thoughtful tones. He presented his analysis of the Israeli-Palestinian conflict, unsparing in his criticism of both sides, and stated the progressive case for peace: two states for two peoples.

But the protestors weren’t there to engage with ideas, or to advance a negotiated, peaceful outcome to the conflict. They were there to ‘resist’.

What they were resisting in that lecture theatre on the western coast of the Irish Republic is not clear. Common sense and tolerance perhaps? But there they were. Seething westerners draped in keffiyehs and kitschy woven Palestine bracelets, the essential uniform of today’s fearless ‘revolutionary’.

Brendan O’Neill, the British libertarian agitator calls this phenomenon the ‘politically correct form of blacking up’. Ashamed of their ‘white privilege’, the activists appropriate the symbols of a people they see as noble and downtrodden; reducing them to a crude stereotype, a positive one in their minds, but an insulting, racist caricature nonetheless.

For the Israel-haters, Palestinians are helpless victims, totally without agency and therefore without fault. They exist only as an abstract construct of untarnished innocence, an idealised nation of goatherds and olive farmers.

But this deception is only one half of the equation.

To complete the resistance fantasy, one must conceive of a villain worth opposing, ‘the Zionist Jew’. This equally mythical figure, evil beyond redemption, has been invented just so that it can be slain. It is as far removed from reality as the caricature of the Palestinian as pure victim. All-powerful, menacing, insatiable and lethal. The ‘Super-Jew’, as London Times columnist David Aaronovitch calls it. If the traditional racist stereotype of the Jew is greedy, ruthless and cunning, wait till you meet the Zionist.

Yet Zionism is no more or less than the secular, national movement of the Jewish people. Like the national movement of the Palestinians, it sees the nation-state as the expression of a people’s right to self-determination. It makes no immutable claims regarding the State’s borders. Israel has twice traded territory for peace treaties (with Egypt in 1979 and Jordan in 1994). It does not seek to deny equal citizenship rights for members of ethnic or religious minority groups. It does not aspire to impose the religion of the majority on others.

But fighting real Zionism, a people’s inalienable right to self-determination, hardly qualifies as the noble struggle about which self-righteous westerners fantasise, and would thus leave their pretentions to heroism unfulfilled. It is a far more intoxicating prospect to defeat imperialism, colonialism, apartheid, genocide, ethnic cleansing, fascism and Nazism in one dizzying swoop. Slay the Zionist beast and redemption is achieved.

Australia had its own Galway moment in March.

A guest lecture delivered by the former commander of British forces in Afghanistan, Col. Richard Kemp, on the ethical dilemmas of modern asymmetric warfare, was stormed by anti-Israel activists, intent on shutting the lecture down. The activists chanted through a megaphone until they were forcibly removed by security staff. Scuffles ensued, audience members and activists traded insults and a senior academic at the University was filmed in the unedifying act of waving banknotes in the face of an elderly Jewish woman. The activists who sought to silence speech through a megaphone later claimed to be not only victims but defenders of free speech.

A persistent feature of the anti-Israel movement is the handful of Jews who are to be found in its ranks. They are regarded as immensely useful to the ‘cause’.

Firstly, they provide essential cover against charges of anti-semitism, merely by citing their Jewish background. One such activist spoke at an anti-Israel rally during the 2014 Gaza War which featured Israeli flags defaced with swastikas, Hezbollah banners, anti-Jewish chants in Arabic and pamphlets warning that the Australian government has been overrun by a ‘small minority group’. In a statement that was more revealing than he could possibly have realised he declared, ‘I don’t see any anti-semitism here.’

The other use to which the Jewish anti-Israel activist is put is to serve as an ostensible ‘expert’ with insight into the supposedly evil designs of the Zionist Jew.

In an exchange of letters about the conflict with Peter Baldwin, a former Labor cabinet minister, the same Jewish anti-Israel activist warned that, ‘[Baldwin] fails to recognise the deep roots of ethnic exceptionalism in Jewish tradition.’ This is the language of academic sophistry, a cloak to disguise an appeal to ancient prejudices and misconceptions held by non-Jews concerning the Jewish religious tradition of ‘the chosen people’. Of course, anyone possessing even an elementary knowledge of theology or of Jewish history knows that the concept of the chosen people is about religious duties, not rights over others, and in no way holds the Jews to be superior to other nations. Claiming that it is the ‘character’ of the Jew that explains Israeli government policies to which one objects is a transparent and deplorable descent into a well-worn and long-discredited racist trope.

We are frequently told by anti-Israel activists that ‘an increasing number’ of Jews are turning against Israel. Yet extensive polling conducted in Australia and the US has consistently found that support for Israel as the State of the Jewish people is perhaps the one issue on which Jews agree most strongly, though of course views about specific policies and the vision of how to achieve peace vary.

So what motivates the tiny number of Jews who turn completely against Israel and the Jewish community, instead of constructively criticising or contributing from within? 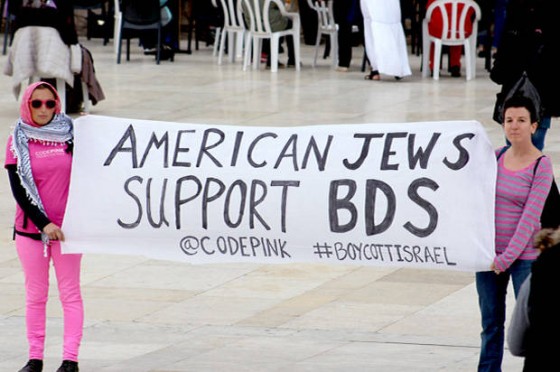 The answer is perhaps best left in the realm of psychoanalysis. But certainly in the theatre that is the anti-Israel movement, there is no more heroic role to play than that of the ‘dissident’ or the ‘revolutionary’; the Jew who is so ‘enlightened’, so courageous and so moral that he or she will stand against the community, speak truth to power (Jewish power no less) and risk social exclusion. ‘Not in my name’ is the catch-cry. Wearing the tag of ‘self-loathing’ with honour, Jewish dissidents can cloak themselves in the righteous retort, ‘I loathe only injustice.’

The reality is almost the mirror opposite. Jews who turn against Israel and their own community are frequently people who work in academia, the arts, media and entertainment, often succumbing to peer-group pressure to condemn Israel.

Far from an act of heroism, their turning is an act of expediency or cowardice or both. The co-operation of their peers and prospects for career-advancement may depend on them having the ‘correct’ opinions. They have little to fear from the Jewish community, to which their affiliations have usually been weak, and of which their knowledge is poor. And the rewards of betrayal can be great – approbation from peers, a shot in the arm for a mediocre career, maybe a book or two.

But bigotry has never been a genuine form of dissent. It would take far greater moral fortitude and be far more ‘revolutionary’ for them to be mavericks among their peers and stand up to the hatred that underpins the anti-Israel movement instead of denying that the hatred exists.

Driven by fanaticism and the desire to act out fantasies of heroism and resistance, the anti-Israel movement is defined by symbolic acts that change nothing.

Adherents celebrate when pro-forma anti-Israel resolutions are driven through hospitable forums and pop stars are intimidated into cancelling their gigs in Tel Aviv. How this improves the life of a single Palestinian has never been established. When a moderate voice in the Palestinian leadership emerged some years ago in the form of PM Salam Fayyad, a technocrat who understood that a Palestinian state must be built before it can be recognised, he was invariably labelled a ‘stooge’ and ‘collaborator’, and hounded from office.

When Palestinians starve in their thousands in Syria barely a whimper is raised, never mind a street protest or a petition. When Palestinians are left homeless in Gaza by the Egyptian demolitions of houses to make way for an impenetrable cement barrier, through which not a bag of aid or food can pass (in contrast to the thousands of tonnes of supplies that enter Gaza through Israel each week), the activists are nowhere to be seen or heard from, frozen into indifference since Israel cannot be blamed.

And so, the legitimate aspirations of the Palestinian people are buried under the fantasies, delusions and self-serving conduct of their would-be rescuers. Meanwhile, the Palestinians remain stateless, divided and infantilised, suspended in the role of victims, despite being actors in a conflict it is within their power to resolve.

Alex Ryvchin is the Public Affairs Director for the Executive Council of Australian Jewry. This post originally ran at The Spectator (UK) and is reprinted with permission.

The Palestinians aren’t after any kind of peaceful solution – they want Israel gone and the Jews dead. Period.

They are heirs of the Nazis by direct line of descent.

The use of the term “Palestinian” to apply to Arabs intent on destroying Israel, is an invention of Arafat.

The anti-Zionism shtick is a nice cover for rank Jew-hatred. No matter how it’s dressed up, the people who participate in it, even the JINO’s, hate Jews. They love Jews best as helpless refugees who can be kicked around, defenseless.

Question: What’s the difference between the tactics of the Anti-Zionist bunch and the BLM Crowd?

Answer: Not much, and especially as to their goals!

No need to ponder the “few” Jews found in the BDS ranks, or elsewhere. I think of them as “self-hating” Jews. Their internal anger is so great…essentially being Jewish is a pathological anathema to them.

The answer to that is simple. You don’t like being a Jew, convert. They have already chosen Islam, but they won’t say so.

Good essay overall. However, you used the terms “handful” in one sentence and “tiny” in another to describe how many Jews are aligned with the anti-Israel political left. Maybe those are fair characterizations. But my impression is that those modifiers downplay the real number.

Once again, Jew hatred is demonic – straight from Satan. Those who do not believe in God are not equipped to understand the real source of Jew hatred, and therefore are reduced to looking for it in the nature of Jews themselves. I suspect the vast majority of Jewish anti-Zionists fall into this category.

Yes, exactly, gibbie! It’s not a geopolitical but a spiritual problem. 12,000 thumbs up!

The only way to deal with brownshirts is to spray their brains all over the sidewalk. Bash them all with whatever weapon you have. Next time you see some idiot college BDS coed screaming, punch her in the face as hard as you can.