as anti-Israel Prof. waves money in face of Jewish woman. 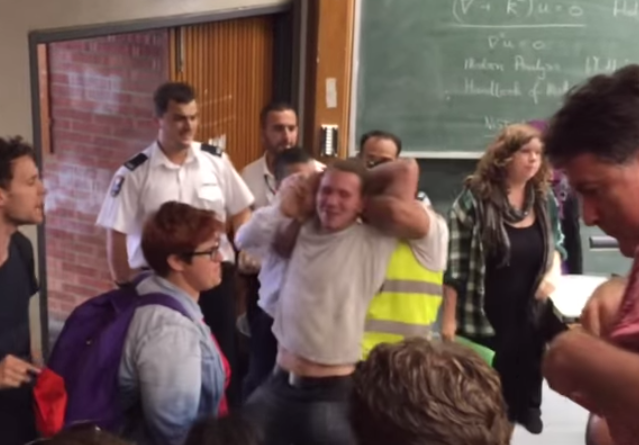 This is an all too familiar occurence, including at far away places like U. Galway and close to home places like Cornell.

Israel haters of various flavors take over stages, attempt to shout down speakers, and in some cases physically attack.

It just happened a few days ago at the University of Sydney, in which anti-Israel students attempted to prevent retired Colonel Richard Kemp from speaking.

A LECTURE by retired army colonel Richard Kemp at the University of Sydney was disrupted by at least a dozen screaming students who fought with security on Wednesday afternoon.

The students had burst into the room shouting “Richard Kemp, you can’t hide, you support genocide” and wrestled with security guards before being removed from the hall.

Kemp was giving a lecture about ethical dilemmas of military tactics and dealing with non-state armed groups.

According to the Australia/Israel & Jewish Affairs Council’s Glen Falkenstein, protesters stood on chairs, began to push students and shout loudly at those who objected to their behaviour.

Professor Jake Lynch, the director of the Centre for Peace and Conflict Studies (CPACS) at the university, shouted in the faces of students and screamed that attempts to remove the protesters was a violent attack on freedom of speech by security guards. He was also seen holding money to the face of a Jewish student and filmed students in attendance without their consent. Prof Lynch later explained to The AJN that a woman behind the student not visible in the frame was physically attacking him and he held out the money to illustrate that he would sue her if she did not stop. 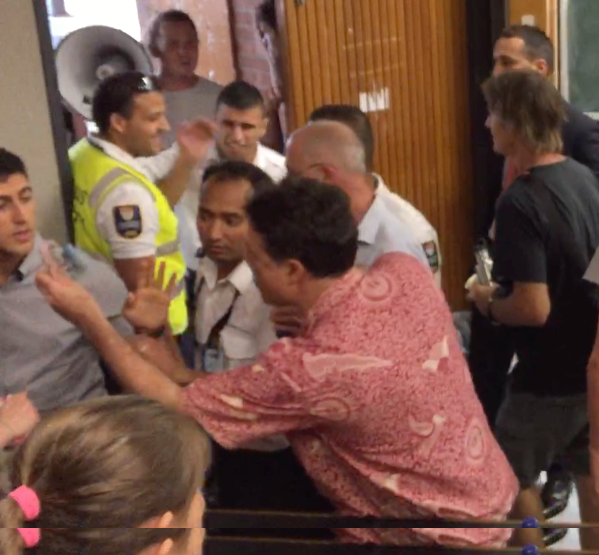 Lynch successfully fended off a lawsuit claiming anti-Semitic discrimination against an Israeli scholar. Waving money in the face of a Jewish student could be seen as an act of anti-Semitism — proving once again that the line between anti-Zionism and anti-Semitism has become completely blurred in the real world — whether in the streets of Europe or the lecture hall at University of Sydney.

But no, Lynch claims waving the money was just a threat to sue her, as the Australian Daily Telegraph reports:

SYDNEY University will investigate an incident in which Associate Professor Jake Lynch was filmed waving a five dollar bill at an elderly Jewish woman enraged by anti-Israel protesters at a lecture.

Dr Lynch — Director of the Centre for Peace and ­Conflict Studies — claims he was threatening to sue the woman after she kicked him “in the meat and two veg”.

Colonel Richard Kemp, a retired British military officer, was delivering a lecture on the ethics of armed conflict at the university on Wednesday when several students stormed the room and began chanting anti-Israel slogans.

Within minutes of their entry, Associate Professor Lynch began filming the fracas.

He was involved in a ­confrontation with a woman, believed to be 75 years old, with the two taunting each other.

Mr Lynch then reached into his breast pocket, pulled out a $5 note and began waving it in the woman’s face.

Dr Lynch said his actions were intended to represent a threat to sue the woman.

Sure. Um hum. I guess you think we are all stupid.

Here is the type of opinion the U. Sydney thugs did not want people to hear:

UPDATE: Via Jews Down Under (h/t Elder of Ziyon), Kemp has written a letter to the Chancellor of the University, including this on Prof. Lynch’s behavior:

Associate Professor Jake Lynch, the Director of your Centre for Peace and Conflict Studies, and Dr Nicholas Riemer, one of your senior lecturers, who were both apparently leading and encouraging the protesters, screamed at the security officers to desist. This seemed to be a clear attempt to impose their own authority as faculty members, thereby hoping to intimidate the security officers into allowing the abusive demonstration to continue. At one point I observed Associate Professor Lynch waving money in the face of a Jewish student, a clearly aggressive and insulting act that seemed to invoke the stereotype of the ‘greedy Jew’. Although not Jewish myself, I found Associate Professor Lynch’s behavior deeply shocking and offensive.

I felt the language directed against me to be abusive and insulting. I have never supported a genocide nor the killing of civilians of which I was also accused by the protesters. In fact I have devoted my entire working life as a British soldier to defending my country and the countries of friends and allies; to preventing killing, terrorism and ethnic cleansing; to peace‐ keeping and to humanitarian operations. I have frequently risked my own life to do so. I have often served alongside troops from your own country. Surely it is not right that I, as a guest of your university and a visitor to your country, should be subjected to such gratuitous insults and slander….

I would add that you have a particular responsibility in respect of the racist, anti‐Semitic nature of this protest. As you know anti‐Semitism is a rising phenomenon in the world. Jews in many places live in increasing fear and concern that they will be singled out and discriminated against. Only by taking firm action against anti‐Semitic abuse and hatred whenever and wherever it occurs can this situation be reversed. Sydney University has the opportunity here to set an example to other academic institutions that lack the moral courage to face up to the modern scourge of anti‐Semitism.

When did Richard Kemp join ISIS? As far as I can tell, they are the only ones committing genocide in the ME. Hamas would like to.

Is this Nazi Germany? And will the Jews of America remain ‘boehners?’

Nazism is on the rise. Jews need to start defending themselves. Some of these so-called students and even more profs need to be found in the gutter with knives in their kidneys.

Otherwise, the line for the showers is on the left.

Were I the Chancellor of the University of Sydney, besides creating a beer garden on campus, I would have the student whom Professor Jake Lynch assaulted be the one to wave the pink slip in his face.

The headline to this story should be,

“Hateful Tenured Eunuch Drunk on Anti-Semitism Feels Delightful Tinge of Pain from Kick to Non-Existent Nuts, Tries to Tip Woman into Kicking Him Again in Hopes of Finding Family Jewels.”