It’s okay to leave the table to prevent a nuclear reaction.

On Christmas Day 2011, as part of our “Open” post, we noted the following:

What a bunch of kill joys, How to Discuss Climate Change With Your Uncle During the Holidays (because after racist relatives, climate change deniers are the biggest problem at family Christmas dinners).

The advice was from a guest contributor at Think Progress: 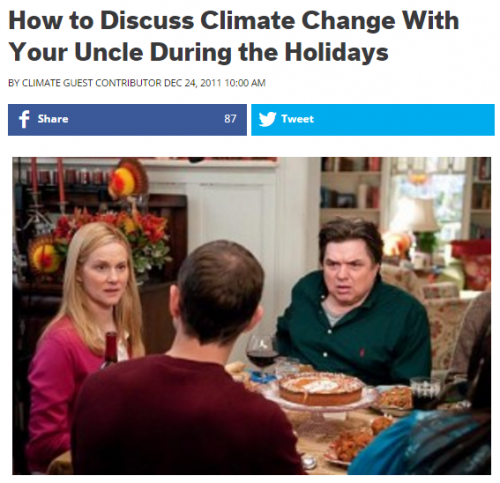 2. Don’t be insulting: There’s no going back from ad hominem attacks. Don’t treat your uncle like he’s dumb, and don’t be rude or condescending. Admit it when you don’t know something; give your uncle credit when he’s right. This will help your credibility, and maybe even help prevent a holiday fracas with your family.

Don’t be that person.

Remember, as even Think  Progress acknowledges, holiday meals are about family and friends, and making environmentalists smile:

However you decide to handle a climate-change denier at the dinner table, don’t forget the reason you’re both sitting there. Holiday meals are a celebration of family and friends, and you shouldn’t let a scientific debate kill the good vibes. It’s a smart strategy to apply elsewhere, too — if you can explain global warming without losing your cool, you might give environmentalists everywhere something to be thankful for.

Remember, folks, it’s okay to leave the table to prevent a nuclear reaction.

Want to shut them up? Talk Christ and Him crucified for US every time they want to spout nonsense. Remind them He was a real Conservative who upset the rulers so the people could have the Torah in all its fullness.

If any of your relatives are Islamic converts, don’t just talk about the Law and the Gospel. Make sure you stress Torah; diligently mention the Tanakh, the Nevi’im (Prophets) and the Ketuv’im (Writings, aka Psalms and such). Make sure you liberally sprinkle your conversation with Jewish terminology like temple and synagogue, Jew, circumcision, baptism. Don’t forget to remind them that it was at Antioch that the word Christian came into being.

The dinner conversation can be very cheerful and informative if you are determined to deflect. Deflect away.

You forgot discussing the core of Islam Sharia and the command of Muhammad to spread the faith by the sword of conquest and murder all that resist. About the “moderate” Muslims aren’t real Muslims because they violate these commands of Muhammad. That Iran, ISIS and the rest of the terrorists are the true Muslims.

To all: Happy Chanukah! Merry Christmas!

The amazing thing about global warming is the “forgetting” of known science. The CO2 cycle has known for decades (if not centuries). 97% of CO2 comes from plants which take CO2 from the soil and air and release them mostly into the air when they die for a net positive CO2 (AKA carbon load). That is why CO2 is a thermometer (not a heater); more plants grow when it is warmer. CO2 tracks the temperature of the earth with about a 50 year lag, because it take that long on average for the plants to grow and rot. The CO2 settles out of the atmosphere and into the soil with a half-life of about 10 years which you can gather by looking at the data. How is all of this not in the “news”.

Dear Sir, you need to review (learn) about photosynthesis before you spout anymore CO2 nonsense.

So in your alternate universe, plants don’t take CO2 from the air and soil? In our universe, plants pull CO2 from the air and soil when they are alive. After they die, enough CO2 is released into the air for a net positive of CO2. That is why 97% of the CO2 in the air comes from plants. That CO2 settles out the air and into the ocean and soil at about a 10 year half life. I’m sorry if that doesn’t fit your “narrative”, but these are known scientific facts that are decades (if not centuries) old. For example, we know the temperature from thousands of years ago by how much CO2 is in that layer of soil. In the Jurassic era, CO2 was 10 times higher than what it is today.

As another commenter put it, the sun is in control of CO2, because CO2 is a function of plants. More plants grow when it is warmer, and the temperature of the Earth is dictated by the sun.

CO2 is a thermometer not a heater.

Rather than call me wrong, please state some scientific theory or principle to support your position.

Then give the ignorant little bastard the following speech:

“All righty. I’ll turn off the heat. We will forego our dinner prepared by using the stove. I have a sledgehammer; we can crush all of your evil battery powered devices. We will strip you of all synthetics in your clothing. How about we make you walk back to your university naked and starving. Now, you have two choices: Either “Shut up and mind your manners” or “Get the hell out of my house. You can freeze in the dark for all I care.”

“you shouldn’t let a scientific debate kill the good vibes”

I’ve never yet met a believer in global warming who knew enough to actually have a scientific debate. Ignorance is the norm. I say, if it comes up on Christmas, change the subject. It’s not worth spoiling the joy.

The way you should discuss Global Warming is as follows:

1) The theory leaves out the most significant factor that determines our climate – the energy the Earth receives from the Sun. It is impossible to predict so that means that the models won’t work.

2) In order to prove a theory you have to compare real world results against the theory’s predictions and have everything match. This requires:

1) A reliable method of measuring the climate that doesn’t require that the date be fixed to match the theory.

2) Have the models predict the future climate for a short time of 1000 years into the future. These predictions should be identical because the theory is “settled science”.

3) Compare the predicted climate with the actual climate data for the next 1000 years. If the predictions match reality then there is something to the theory.

After the theory is proven the scientists need to develop a cure for the problem that isn’t worse than the disease. The current solutions have two problems. First the solutions give government too much power over our lives and that is likely to create a fascist state like the USSR which is unacceptable. Millions of Americans have fought to defend our freedoms from tyranny and we can’t allow tyranny to take root in the USA. Next, the current solutions will destroy the world wide economy, throwing billions more into poverty and kill hundreds of millions who will be unable to find jobs, pay for food, heat their homes, afford homes or afford medical treatment. The solutions put forward by these advocates of GW and progressive fascists are worse then the problem.

The guys who run the 2 phase sun models have shown their models to be 97% accurate when compared to historic data. They say the world will continue to grow colder until about 2033. The other models have not been run against real data and published. It is most likely that the creators of those models know that they are about 0% accurate.

I’m pretty sure any insufferable douche bag THAT bent on climate change gets ridiculed into oblivion on a million other subjects before climate change comes up.

Excuse me- I have a burn barrel that needs lighting.

Michael Crichton on the idiotic idea that one can predict conditions 100 years into the future:

“Horse pollution was bad in 1900, said Crichton. How much worse would someone in 1900 expect it to be a century later, with so many more people riding horses?

“But of course, within a few years, nobody rode horses except for sport. And in 2000, France was getting 80 percent of its power from an energy source that was unknown in 1900. Germany, Switzerland, Belgium, and Japan were getting more than 30 percent from this source, unknown in 1900. Remember, people in 1900 didn’t know what an atom was. They didn’t know its structure. They also didn’t know what a radio was, or an airport, or a movie, or a television, or a computer, or a cell phone, or a jet, an antibiotic, a rocket, a satellite, an MRI, ICU, IUD, IBM, IRA, ERA, EEG, EPA, IRS, DOD, PCP, HTML, Internet, interferon, instant replay, remote sensing, remote control, speed dialing, gene therapy, gene splicing, genes, spot welding, heat-seeking, bipolar, Prozac, leotards, lap dancing, e-mail, tape recorders, CDs, airbags, plastic explosive, plastic, robots, cars, liposuction, transduction, superconduction, dish antennas, step aerobics, smoothies, twelve-step, ultrasound, nylon, rayon, Teflon, fiber optics, carpal tunnel, laser surgery, laparoscopy, corneal transplant, kidney transplant, AIDS. None of this would have meant anything to a person in the year 1900. They wouldn’t know what you are talking about.

Now you tell me you can predict the world of 2100. Tell me it’s even worth thinking about. Our [emissions] models just carry the present into the future. They’re bound to be wrong. Everybody who gives it a moment’s thought knows it.”

— Michael Crichton in a 2003 speech on climate models at CalTech