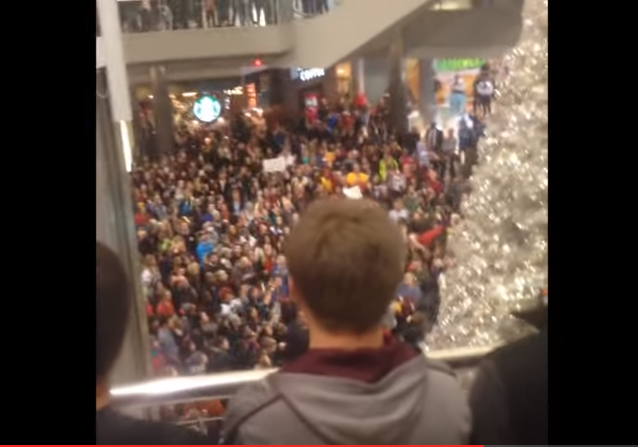 The Mall of America has gone to court seeking an injunction against Black Lives Matter protesters disrupting shopping at the mall on Christmas Eve day.

The Minneapolis Star Tribune reports on the hearing held in court today:

With a planned demonstration by Black Lives Matter at the Mall of America less than two days away, a Hennepin County judge on Monday heard arguments over whether the shopping complex has the right to a restraining order against protesters.

In its request, the mall named four alleged leaders of Black Lives Matter and asked Judge Karen Janisch to prevent them from encouraging people to demonstrate Wednesday and to take down any social media messages about the event. The mall also wanted Black Lives Matter to post a social-media message canceling the demonstration and to post a copy of the judge’s restraining order, if one is issued.

I’ll admit that I’m not up to speed on how 1st Amendment protections apply on a private property that nonetheless operates as a public space, a replacement for Main Street. So I express no opinion on the legalities.

A judge ruled Tuesday that several local Black Lives Matter organizers cannot demonstrate at the Mall of America on the busy shopping day before Christmas Eve, but she said she couldn’t stop others from attending the protest.

Lawyers for the nation’s largest mall had requested a temporary restraining order to prevent the Black Lives Matter protest planned for Wednesday, in hopes of avoiding a repeat of the massive demonstration that disrupted business and closed stores in the mall last December.

Hennepin County District Court Judge Karen Janisch barred three protest organizers named as defendants in the mall’s lawsuit from attending the demonstration, but she limited her order to them. The mall had sought to block the entire Black Lives Matter group from protesting.

Regardless of the state of the law, the injunction should issue so that the riot preparations are disrupted. Let the thugs spend the legal fees to petition the appeals court for interlocutory review when they do not have a right to the injunction. Should make for a quick denial of certiorari.

Brings to mind Ray Benson (the World’s tallest Jew) and Asleep at the Wheel singing – Christmas In Jail!

Santa don’t come to the pokey girls and boys.

The mall folks or just the locals should pull the judge off her high-and-mighty throne and toss her into the throng of protestors. Let’s see how she fares.

A anti-DNC ad in the making

The Mall of America IS private property. You can’t force a private property owner to provide a venue for someone to organize a protest. Would the judge in this case appreciate someone ordering her to allow protesters on her property?

You’re right that you can’t do that, and yet many judges in this great country have done exactly that. Under the guise of the 1st amendment, no less. An amendment that explicitly limits its remit to Congrefs, which the mall owners are not.

I don’t remember at the particulars, but a year or two ago in DC, there was a demonstration by SEIU (?) where they claimed, and the police acceded, that they could protest while on the sidewalks of a private residence because they were “public spaces.” They were not allowed in the residence or off the sidewalks (i.e. on the grass). I seem to remember a picture with protesters up and down the access walkway to the residence.

Professor: Have to agree with your point of view, as painful as that might be for my neighbors who want to shop at MOA.

When enough such events happen, when the highly aggrieved bunch get their collective panties in a bunch, when they interrupt the peaceful activities of others enough times, maybe there’ll be a backlash against such idiocy; maybe even by those that would otherwise tend to support those highly aggrieved ones.

Ever wonder what would happen were a bunch of conservatives try and express themselves in the same manner as the BLM folks? Would these highly aggrieved conservatives be treated like the BLM folks are treated? Heck no! The MSM would trash them like they were the remnants of Atilla’s hordes, or worse.

One only has to recall how the TEA Party has been painted.

When the Right protests, we do so legally. We get a permit to use a public space. Pay for things like porta-potties and police protection (which is entirely unnecessary unless Leftists are expected to show up), and when we’re done we clean up after ourselves – to the point of leaving the space in better condition than we found it.

Leftists rarely do even the first step of the above, and never any of the rest. The entire bill is footed by taxpayers (aka. Republicans). They leave the space completely trashed EVERY time – even when they have a permit to be there.

In this case, the business owners, and the mall owners, should SUE the BLM Terrorists for every dime of lost revenue and added expense (like the massive boost in security they’ll need just from the threat of the invasion).

If I remember my trespass law at all well, a shopper is an “invitee” on the premises of a store.

That status can, of course, change immediately if they make it apparent they are NOT there for the purpose of commerce. They can, by their conduct, immediately become trespassers.

I sure don’t know the law, but I vaguely recall some malls trying to stop even those flash mobs, where a group shows up quietly then does a song and/or dance production, seemingly spontaneously.

This BLM activity seems organized with intent to cause harm to the mall’s commerce, to be the Grinch that steals Christmas joy, and sales. They are taking mall space without contract or rent, and advertising the product (vanity, chaos, coercive power) they are “selling”. They didn’t build that.

The optics of BLM blocking shoppers might be “good” (bad for them) in that busy people are obstructed from doing their business. But news coverage might glamorize the event. The optics are bad for those inconvenienced (or assaulted), but MSM may inspire thousands more BLMers seeking attention. This is just what the terrorists Obama wants.

With terrorists it is victories that compel others to join ISIS (not Trump promising to resist rather than submit). BLMers want to disrupt and get in your face, (thanks Obama) not just demonstrate in some public park. Stopping them at the mall seems more powerful than submitting and hoping to win a couple points on optics. Submission is for dhimmis. Playing the victim game is weak. MoA’s preemptive action seems smart.

Too bad such riotous behavior is promoted from the White House. The occupoopers were allowed to disrupt commerce for weeks it seems, banging their drums, smoking weed, camping and trashing the place. Different rules for the radical left.

Does the First A allow protesters to destroy property and interfere with commerce?

Well, no, but in theory only!

Wonder when Obama will provide such protect from hurt feelings to other religions?

That’s an outright falsehood. She never said or implied any such thing.

Ok, she never directly said that, yet her statement directly made that implication and even a hearing impaired person could hear that in her words and especially in her tone.

Recall that she said it was her duty to protect Muslims, shortly after the San Bernardino shootings. FWIW: I only know of two Muslims who were shot that sad day; don’t know if those were ones she meant to protect.

No. It doesn’t. That’s one of the canards of the OccupyWhatever “Movement”. But Collectivists lie, first to themselves, and they really, really like ignorance.

No, not the First Amendment, but Stephanie Rawlings-Blake certainly does.

An analogous anecdote from nearly a century ago. World Chess Champion Emanuel Lasker was famous for his cheap Maduro cigars (smoking was permitted everywhere back then). The theorist Aron Nimzowitsch was allergic to smoke, and requested Lasker refrain from smoking during their game in a tournament. Lasker agreed.

A couple of hours in, the game became intense and Lasker pulled out a cigar and fondled it as he thought. Nimzowitsch immediately protested to the arbiter that Lasker was breaking their agreement.

The arbiter pointed out that the Champion wasn’t actually smoking but Nimzowitsch was adamant: “Dr. Lasker himself has written that in chess, the threat can be deadlier than its execution!”

The point being that the threatened demonstration, or any sign it would take place, is enough to discourage real shoppers.

What you describe is not unlike the threat of terrorism we face from the islamofascists.

Those with a desire to shop that mall should do so, and just avoid and ignore these menacing clowns.

Do Blacks, Gays and Muslims think that being in our faces all the time will make us love and respect them? More likely there will be a backlash and the backlashers will go to jail. I’m afraid that eventually we will get a real, dangerous demagogue, a race war or both.

Being in our faces ferrets out the bad people who are willing to stand up for themselves despite their special victim status.

While I agree with the general sentiment, there is one thing forgotten. The BLM crowd will ignore the later consequences and see the protest as a victory.

I’m loathe to let them think they have a victory.

BLM wants to be in the face of The Man, so they will probably proceed with their plans regardless of an injunction. Soros has deep pockets to pay lawyers and fines for them.

So the judge said no to the organizers, but allows the group.

The mall needs a bunch of staff dressed casually, quietly recording and asking many why they are there, who sent them, how did they know to meet, what is your INTENT? Then if there are damages (physical or in lost revenue from closings and obstruction) … they can sue the organizers maybe, or the individuals if they are aggressive.

I don’t see how it is legal/right to organize a rally inside a business, knowing they are not wanted. Maybe the mall could set up a “free speech zone” for them, like colleges or protesters at the Democrat convention in Denver (I think it was Denver, where they had a remote fenced off area)

Nothing much will change here. If the BLM folks ever had a point, and it’s not certain they did, this will just solidify feelings and opinions; supporters will carry on and it will probably have a negative impact on most others, neither of which is of the least bit of interest to the organizers, here. With all that’s going on in the world the BLM folks were becoming yesterday’s news and needed a way to make sure they weren’t forgotten, a way to get some TV face time. This will accomplish that; they’ll saturate every news program and talk show in the nation for at least the next twenty four hours. Equally predictable–the judge and legalities are a mere side show as they have become too much of the time almost everywhere–BLM will play along and pay lip service, few others expect much or even care.