What if Homeland Security has a 95% failure rate in screening jihadi brides? 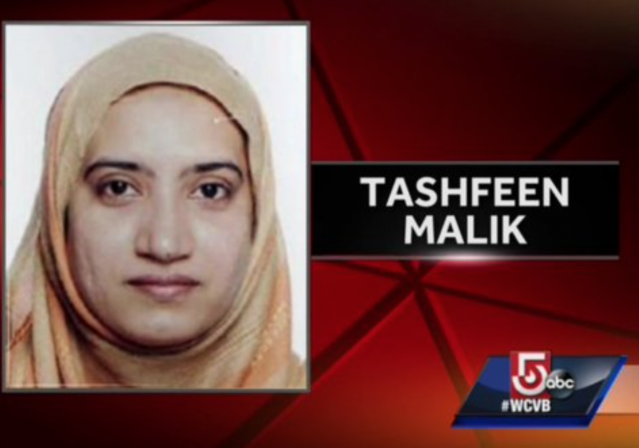 We reported dive crews were searching a lake in San Bernardino for evidence related to the terror attack that left 14 Americans dead.

It appears that investigators may have located some:

Divers recovered items from a lake in San Bernardino, Calif., where a couple who killed 14 at a nearby regional center Dec. 2 possibly dumped evidence on the day of their shooting spree, according to various media accounts,

…Divers began searching the lake Thursday, and some items were recovered before the search concluded Saturday, but the FBI did not reveal whether anything pulled from the lake was related to the investigation of the shootings.

Meanwhile, there seems to be a quandary about what to do with the corpse of terror bride, Tashfeen Malik. For some reason, the husband’s family is in no rush to claim it and ensure it receives prompt burial according to Islamic custom:

The body of San Bernardino terrorist Tashfeen Malik may be cremated – a practice strictly forbidden by Islamic law – because nobody wants to claim it, it has been reported.

Malik’s body and that of her husband Syed Farook is still being held at the San Bernardino County morgue more than a week after the pair were shot dead by police.

But while Farook’s remains are expected to be released to his immediate relatives in California soon, nobody has stepped forward to take care of Malik’s body, Fox News reports.

The most likely sequence of events will be a low-key burial overseen by government officials in an unmarked grave in a cemetery run by an Islamic group. This was the case with Tamerlan Tsarnaev, after Cambridge, Massachusetts residents made it clear they didn’t want the remains of one of the Boston bombers anywhere within city limits.

The saga of Malik’s body should give potential jihadi brides some pause before embarking on a career in terror. There is increasing concern that newly wedded Islamist women plan American honeymoons ending with suicide bombings.

Meanwhile, three more of Malik’s victims were buried this weekend. The families of Tin Nguyen, Isaac Amanios, and Shannon Johnson buried their loved ones Saturday.

It turns out Amanios had come to this country after fleeing from the violence of his native land, Eritrea:

Amanios was a family man who tutored his three children with their schoolwork, relatives said. All are currently in college, said his nephew, Zeke Gebrekidane.

“He was looking forward to his kids graduating from college,” he said. “He came here so his kids could have a better life. It’s not just his family affected, but the entire community is affected by this tragedy.”

The best memorial our government could give our dead, killed during the War on Terror, is to stop hiding “background checks” and “screenings”, which failed to detect Malik’s vile, militant jihadi sentiments during her life.

…Malik was screened by Homeland Security officials then the State Department before she entered the US and then faced a third screening after applying for a green card, the NY Times reported.

I shudder to think that Homeland Security has a 95% failure rate at detecting jihadi brides, which is the rate of TSA screening failures.

No matter the final disposition of her corpse, this must be the last jihadi bride who comes to America. Our government now needs to put the security climate at the top of its priority list.

Someone nearby should claim the body and burn it in a trash can.

No way! Too easy.

Strap a bomb on her and drop her on ISIS. That way she can gang bang her friends! 🙂

Imagine them finding the hard drive, and a thousand emails to various US jihadis on plans to kill. All those could then be watched to find more of the nest of supporters and planners. It would reveal their inner networks, and maybe America wakes up to the root problem of forced Islamic diversity/invasion and Lynch’s hate speech threats. Maybe.

Maybe Obama will order that she be buried at sea.

Perhaps they should provide her with a very public version of the Blackjack Pershing Muslim Burial Ritual!!

The Tsarnaev family should have taught our investigators to beware of radical women. This has all been foreshadowed by the Palestinian women who celebrate the murderous acts of their now-dead children.

Oh, but we must not profile, because any effective profiling is raycissss, never mind that Islam is a religion, Islamism is a serversion of that religion, and Muslims come in exactly the same range of skin colors as Jews: from gingers to the blackest of Africans, including some Asians along the way.

Maybe PP could claim it, and get a few bucks for body parts.

She’s too dead. Now, if they could’ve controlled how she was “harvested”, then yah.

I believe the standard procedure for unclaimed bodies is cremation which is forbidden in Islam:
http://www.theblaze.com/stories/2015/12/11/this-could-be-fate-of-tashfeen-malik-if-no-one-will-do-burial-and-its-strictly-forbidden-by-islam/?utm_source=twitter&utm_medium=story&utm_campaign=ShareButtons
I’d like to know who serves in the US consulates in Saudi Arabia (and other Islamic countries) and how prodigious they are with visas.

“I believe the standard procedure for unclaimed bodies is cremation which is forbidden in Islam:”

Too [email protected] bad. Come to the US and off a bunch of citizens you have lost any right to be upset about how your body is disposed of. Burn the witch!

One of the victims famlies should hire someone to claim the body then have her cremated and her ashes spread out over a pig farm.

See my above post concerning Black Jack Pershing and the Muslim uprising in the Phillipines way back (or was it Indonesia?).
Anyway, the U.S. Army captured four Muslim terrorists who were part of a group making life hard for the locals. Pershing’s men captured the four, Pershing had three of them killed, had a hole dug, dumped the three in, and then in front of the fourth, he had some pigs slaughtered, spread their guts and blood all over the three dead Muslims and burined them, then told the fourth to go back and tell them what happened.
The didn’t hear from the terrorist group again.

There doesn’t seem to be any evidence that this ever happened, let alone that it was successful.

In Texas, that would involve making a false statement on an official document and conspiracy, along with…

a big, fat law suit for intentional infliction of emotional distress and conspiracy.

Rags can’t wait to run to the side of the dead terrorist killer to try and protect her post mortem dignity. LOL

Well I guess this reaction tells us all we need to know about Cruz and his true feelings for the dignity of terrorist killers.

Me on the other hand thought my comment was a bit of dark comedy. Although I would certainly understand if one of victims families thought it an inspirational idea.

Garry, in character, can’t wait to lie like the SOS he has so often proven he is here.

Find a bunch of pigs you don’t like and feed her to them.

Let it rot a little longer, then send it to the Obamas for Christmas.