Farook and Malik may have been planning an attack on a school or college. 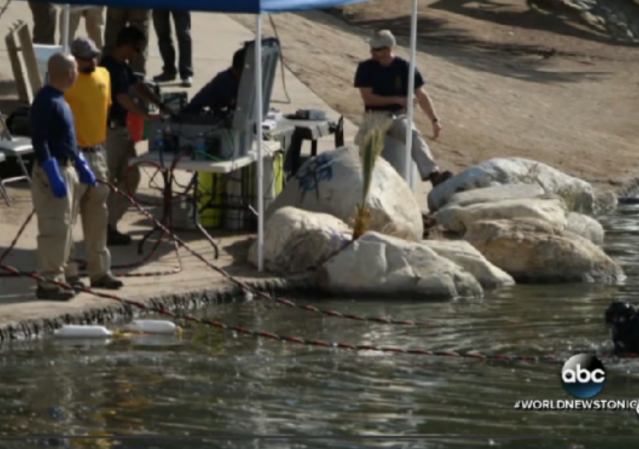 Investigations are continuing into the terrorist couple, Syed Rizwan Farook and Tashfeen Malik, who slaughtered 14 coworkers in San Bernardino and were planning to kill the first responders with explosives.

The quest for clues has led to a local lake:

An FBI dive team was searching a lake Thursday near the site of the terror attack in San Bernardino, California — a spot where investigators were told the shooters spent time.

The FBI would not discuss the specific evidence it was looking for, but said it was seeking “anything that had to do” with the shooting.

….The investigators appear to be combing an area near the shallow edge of the lake. The water is so murky that divers cannot actually see through it, so they are largely feeling their way through.

Investigators had received indications through leads that at some point they came to this park, though they didn’t specify exactly what was being sought when reporters queried them.

However, it would be reasonable to suspect that they are searching for evidence related to plans for larger scale attacks on public places…such as schools.

Farook and Malik were in the final planning stages of an assault on a location or building that housed a lot more people than the Inland Regional Center, possibly a nearby school or college, according to federal sources familiar with the widening investigation.

Investigators have based that conclusion on evidence left behind on Farook and Malik’s computers and digital devices, not all of which the couple were able to destroy before they were killed in a firefight with police, the sources said.

Images of San Bernardino-area schools were found on a cellphone belonging to Farook, according to a law enforcement source. But the source cautioned that Farook may have had a legitimate reason to have the images because his work as a county health inspector involved checking on school dining facilities.

The FBI is checking into the potential terror connections Farook and Malik might have had, and have already found ties to a group of jihadis who were planning to join Al-Queda in Afghanistan in 2012:

Specifically, investigators are taking a new look at one of the four men who was arrested in the 2012 case, Sohiel Kabir. Kabir, who was convicted and sentenced to 25 years in prison, was the recruiter who helped radicalize others.

The 2012 probe happened in Riverside, California, not far from San Bernardino. Farook was in the social circle of Kabir, officials told CNN.

As a mother with a son in a California public school, the thought that state educational facilities were potentially being targeted is very chilling. Between the ideology, weaponry, and explosive devises, perhaps a Beslan-style attack was in the works?

As divers took to the water, the first of the many funerals for the victims was taking place. The service was for 27-year old Yvette Velasco, who was slated to be formally made an inspector during the afternoon celebrations.

One week and a day after the massacre, Velasco’s friends and family gathered Thursday for an outdoor funeral, at a spot on a hill chosen by her three older sisters and parents in remembrance of her love of nature. Her small dark wooden casket draped with white flowers was placed beneath an overcast sky, as friends and family tearfully recalled Velasco’s bright smile, early wisdom and determination to succeed as an environmental health inspector.

…At her funeral Thursday, former colleagues recalled a petite Velasco determinedly driving enormous trucks, setting smelly mosquito traps and lifting heavy bags in spite of her small frame. Her sisters remembered her as the one they went to for advice, even though she was the youngest, because she offered a sound opinion and did not judge. Their father somberly kissed his daughter’s casket and with his wife, tearfully released one white dove into the sky.

After her death, Velasco’s parents and sisters met with the FBI and county officials. They didn’t learn much that they hadn’t already previously been told. But they did get one last piece of their daughter’s life to hold on to: The gold star badge she had been waiting to receive.

The search will continue for some time as will, sadly, the funerals.

What exactly are the authorities looking for. Maybe information about how Farook and Malik opposed Climate Change? Isn’t that the biggest threat to our country? Our president said it so it still must be true.

They are looking for a hard drive that is missing from one of the computers according to other reports I’ve read, although they may find other evidence as well.

The sooner people wake up to the fact that these Muslim radicals are fick sucks, the better ~

Dredge?
Divers swimming along the bottom, looking at stuff != dredge.

I think it may seem a bit more literate than “feeling up the bottom of a lake”.

Although now I find myself strangely stimulated…

Those of us familiar with you are not very surprised at your unusual response. 🙂

Will the results be on the Dredge Report?

Drat! You beat me to it and I made my entry before I saw yours! grr…

Still amazed their friend hasn’t been arrested for making a straw purchase of their guns.

Don’t be. We all want the protections of due process.

Let the evidence be developed to justify a charge on “straw purchase”…or not.

Let due process PROCESS, as I always say.

Exactly. So far I’ve seen no actual evidence that it was a straw purchase. It may have been, but to charge someone you need evidence.

They were purchased two or maybe 4 years befpre and so far nothing has been leaked about when he turned over the guns.

Enrique Marquez is the childhood friend of Syed Rizwan Farook who lived next door to him while they lived in Riverside, and bought the two rifles used to do the killings. Marquez checked himself into a mental hospital after the killings. His home has been searched twice. He maybe converted to islam or maybe de-converted He married the killer’s brother’s wife – or maybe that was a sham marriage maybe even the brother’s marriage was sham.

I’m surprised that the guy wasn’t arrested for impersonating Weird from the “BJ and Dirty Dragon Show”.

In other words, he should have been arrested for looking creepy.

“Looking creepy” is sufficient justification for being put on the Terrorist Watch List.

The attack on a school or college sounds more to me like an alternative, rather than a follow-up, although it’s being leaked to sound like a follow-up.

And I do think they probably had a follow-up in mind.

It is not clear when they removed the hard drive. Planning to do so only after the murders is strange. I mean if they were going to discard it, you’d think they’d do it before, because they might nto get away. Or if they thought they would get away why then in the immediate aftermath, throw away the hard drive? It is not after they found out their names were known. I think maybe they threw away something else into the lake.