CNN Tuesday Debate: Do or Die for Some

CNN Tuesday Debate: Do or Die for Some

With Ted Cruz soaring to a 10pt lead in Iowa, Chris Christie gaining momentum in New Hampshire, Ben Carson losing some ground, Marco Rubio gaining in some polls and holding steady in others, Jeb Bush teetering along, and Donald Trump still dominating in most state and national polls, Tuesday’s CNN debate should be interesting.

Nine candidates will take the stage and be positioned according to their current standing in national polls.

Nine candidates will appear in prime-time Tuesday night for the final Republican presidential primary debate of 2015, a critical event that will help shape the contest heading into the Iowa caucuses. 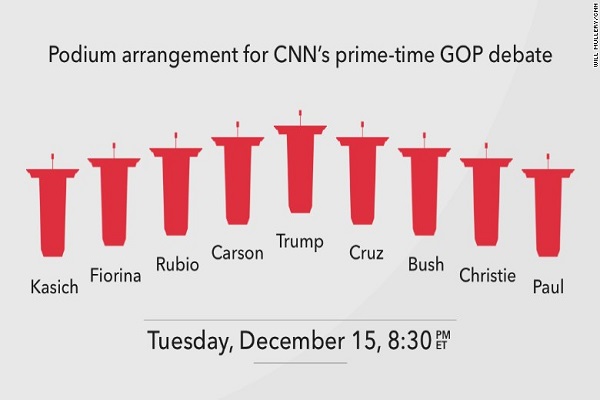 Note that while there was some speculation as to whether Rand Paul would make the prime time debate, he did so, and Christie also made the cut this time.  The earlier debate—at 6 p.m. EST—will feature four candidates:  Mike Huckabee, Rick Santorum, Lindsey Graham, and George Pataki.

The prime time debate will be moderated by Wolf Blitzer, Dana Bash, and Hugh Hewitt.

So what might we expect with regards to the field (or at least the top of the field)?

He’s a mixture of teflon and backbone, and while he’s not shone in any of the debates and is unlikely to do so in this one, we might see him take a shot or two at Cruz.  The moderators are unlikely to skip mentioning Cruz’s comments regarding Trump’s judgment and Trump’s comeback that echoed Cruz’s own challenge to Obama, so he’ll have the floor to speak his mind.  He will undoubtedly be influenced by the news that Cruz is now polling significantly ahead of him in Iowa, so we may see some sparks fly.

He will, of course, be asked about his proposed temporary halt to Muslims entering the country, and there may be a “raise your hand if you agree with Trump” moment.

Over all, though, I don’t expect there to be much there there.

Trump needs a strong debate because he needs to show he’s not Hitler and because Cruz is gaining on him in a very real way.

For his part, Cruz is working hard to stay on good terms with Trump, and this will continue into and throughout the debate.  If CNN hopes for a Trump v. Cruz “cage match,” they will be disappointed.

Cruz will be asked about his comments about Trump’s judgment and the attacks by Rubio on NSA data collection, and hopefully substantive questions on a range of issues from national security, to jobs, to his tax plan, to the war on terror.  This isn’t CNBC, so we may get something more than we did during that abysmal debate performance by those moderators.

Cruz needs a strong debate because he is doing so well and needs to continue his momentum by showing that he’s both the “anti-Trump” and the real conservative (as opposed to Rubio, for instance).

He’s a calm, polite, steady man, and the debate format is not his strong suit.  I don’t expect a whole lot from him during the upcoming debate, though he will probably try to stand out in foreign policy and on terror given his falling poll numbers and recent trip to Jordan.

Like Cruz, Rubio presents himself well and is articulate, particularly on matters of foreign policy and the threats of Islamic terrorism here at home.  Recent public attention on these issues is helping him a great deal because no one is currently asking him about the Schumer-Rubio amnesty bill that came from the Gang of Eight discussions.  This may come up in the debate (particularly if he takes jabs at Cruz).

Rubio needs a strong debate to show potential donors that he can take Jeb’s place as their preferred candidate and to break out of the 10%ish area in which he’s been stuck for so long.

Jeb is horrible at debates, and I don’t expect that to change this time around.  He’s uncomfortable on the stage and seems unsure of himself and a bit defensive.  If he can overcome these tendencies and avoid trying to engage Trump, Cruz, or Rubio, he’ll have a good debate.  If, however, he attempts to take shots at these three candidates in particular, they’ll wipe the floor with him (again).

Jeb needs a strong debate to show donors that they’re not throwing good money after bad.

Christie’s momentum in New Hampshire is putting the swagger back in Christie’s step; he’s visibly more confident and . . . well, blustery and self-righteous.  Some people like that, as evidenced by his poll numbers in New Hampshire.

If they’re smart, Christie and Jeb will try to tag-team Trump, Rubio, and Cruz (that’s the only way Jeb stands a chance), but that has its drawbacks because Christie still has to sound like a conservative during the primaries.  He’s not completely comfortable with that role, so he’ll be interesting to watch.

Christie needs a strong debate to show that he’s a better choice than Rubio as the “new Jeb.”

Fiorina, Kasich, and Rand may try to have a stand out moment.

However, Fiorina’s momentum waxes and wanes too much, so any moment she has will have to be spectacular for it to have a lasting impression on primary voters. Fiorina needs a strong debate to regain the momentum she had over the summer.

Kasich will do what he does (to me he sounds like a Democrat most of the time). Kasich needs a strong debate, but he’s just going to ramble on like the annoying relative who won’t shut up at dinner.

As for Rand, while he had a good debate last time (the CBS debate), he’s feeling the pressure of the increased focus on foreign policy and terrorism.  This brings out the worst in him, and he can become a bit shrill and whiny.  Rand needs a strong debate because he’s barely hanging on right now and needs to change that.

This will be final GOP debate of 2015, and I have to admit that I’m looking forward to it and hope that it will be substantive on issues . . . as well as a bit entertaining as we watch the candidates strive to stand out and either hold their ground or make some substantial gains.

The main stage needs to get cut down by at least two, but far better would be by FOUR candidates. The “top-tier” candidates need to start actually having time to ANSWER questions, not merely have 60 second sound-bytes.

Hopefully by the next debate, the sponsors will have shown some backbone and cut the field down to the top 5-6 candidates, and shunted the remainder down to the under-card debate. Hopefully that will convince some of the also-rans to get out of the race entirely when they have to debate against some much better candidates.

Every one of the debate networks has tried to carry water for the Democrats, some more subtly than others.

In this case they are diluting the field to purposefully reduce the amount of time Cruz and Trump have. There is absolutely NO reason that Kasich, Christie, and Paul need to be included, and Fiorina is borderline (I feel like she’s basically running for VP at this point).

CNN is praying that there won’t be a clear winner out of the primary and the RNC will do something idiotic like force a Rubio/Bush ticket, which would lead Trump to run as independent, and they can crown Hillary.

Harwood and the clowns over at MSNBC were hoping that they could get sound bytes out to the low information voter about ‘Republican candidates talk about serious issues like Fantasy Football because they have no strategies’. It backfired spectacularly on them.

Make no mistake. This is calculated to harm Republicans.

You are correct. It is intentional. Democrat debates allow Hillary to have almost a 1 hour infomercial all to herself. They just keep Bernie and that other idiot around so they can maintain a pretense of a debate versus free infomercial endorsement and advertisement for Hillary.

If the number of GOP debaters was reduced then the public would have, in the media’s eyes, too much time to get to know each of the front runners a bit better. Too much time for voters to compare and contrast to Hillary’s infomercials.

And to the 5-candidate debate. There were only 8 at the last debate. It should be going down, not up. I get that it’s hard to cut candidates before a single vote has been cast, but still. Ah. I see — Kasich is doing fairly well in NH. No idea why Rand’s still in.

Paul and Kasich have no reason to be there, and Fiorina hasn’t shown the slightest movement unless it’s downward.

Media does wish to limit the time of each candidate, lest Trump demonstrate his utter lack of knowledge on issues and spoil their plan to escort him to the nomination by maintaining a virtual blackout on the other candidates.

They know Trump is their best chance to elect Hillary and damage the GOP with independent voters.

Disagree. The media thinks by ganging up left, right and center media and democrat and republican talking heads all concentrating fire on Trump they could take him out. They are far from trying to give Trump nomination. They are doing everything they think will defeat Trump. Its just that what has worked for them in the past isn’t working against Trump. The unprecedented gang up on Trump after his common sense plan to temporarily halt all muslim immigration while vetting is figured out was because the media thought they could defeat Trump with it if they just concentrated their fire enough and for long enough. The most they accomplished was to hold down his assent for a week or two.

The only people carrying water for the democrat is — the GOP, in the personification of Pee Wee Prebus.

What f–king backstabbing hacks. Boehners, all of them.

Maybe the GOP will go all out to support Norman Lear’s People For the American Way, as they launch a “major initiative aimed at combating ‘hate speech’ from Trump and other GOP presidential candidates.”
http://www.hollywoodreporter.com/news/norman-lear-vows-fight-donald-848328

Lear said he’s ‘scared to death of Trump.’ He ought to be: Trump is blowing holes in the b.s. the likes of Lear push, an in effect, ‘dethroning’ putative kings like liberal hack Lear.

When Republicans and Republican
leaning voters are asked who they would support for the GOP nomination for president, Donald Trump leads
the pack at: