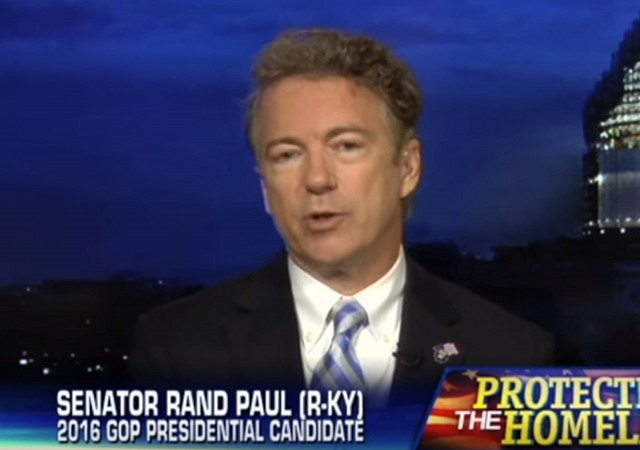 According to polling rules set for Republican primary debates, Rand Paul may find himself demoted to the lower tier while Christie comes back to the main stage next Tuesday.

Rand Paul could be booted from main debate stage

Rand Paul, once considered the main contender for the anti-establishment GOP vote, will likely be pushed off the debate stage next week when CNN announces the lineup for the fifth Republican forum.

Chris Christie, however, has clawed back in the polling thanks to a rebound in New Hampshire, virtually ensuring he will be promoted to the main event in Las Vegas on Tuesday, according to POLITICO’s calculations…

Paul, who lost the outsider mantle to Trump, Carson and Cruz, will probably fall short of the mark. While the senator’s 2.8-percent average in national polls is similar to Christie’s, Kasich’s and Fiorina’s — his numbers in Iowa (3.5 percent) and New Hampshire (3.2 percent) will likely leave him under the threshold.

The Paul camp has been running the numbers too and is worried. “It’s a daily battle, these polls. And the narrative that comes out of them becomes a self-fulfilling prophesy,” said one Paul strategist, adding that the viability of the campaign is challenged if the senator gets booted off the main stage. “We have to remain on the stage in these debates.”

When it comes to Paul’s low poll numbers, he blames one man.

Paul: Blame Trump, not ‘bad ideas,’ for my poll numbers

“I think it has very little to do with my campaign, or me, or what I’m talking about,” the Kentucky senator said Thursday during a local radio interview with WIBC Indianapolis.

According to a CBS/New York Times poll released Thursday, Paul’s support among likely Republican primary voters has shifted neither up nor down since October. He stands at 4 percent in the Times’ poll and earns 2.2 percent support in RealClearPolitics’ GOP polling average.

“I don’t think it’s bad ideas that is making it more difficult for us in the polls. I think it’s that our ideas are somewhat being trounced upon and overtaken by so much attention being paid to one individual,” he continued.

This is ironic when you consider an immigration plan proposed by Paul which, in many ways, mirrors Trump’s recent suggestion. Paul discussed the issue with Sean Hannity on Thursday night.

One upside for Paul is that he’ll likely get more speaking time in the lower tier debate.

That worked out pretty well for Christie.

To me, the polls seem to show the candidates falling into 2 clear categories: Those who maybe have a shot, and those who really don’t. The first group only has 4 members: Trump, Rubio, Cruz and Carson. Everybody else is an also-ran.

It seems to me that any other split is frivolous and unrealistic. WAIT! I think I just described the entire campaign season so far.

Neither one of them will ever be president, but the one who would bring a fresh perspective to the debate is Paul.