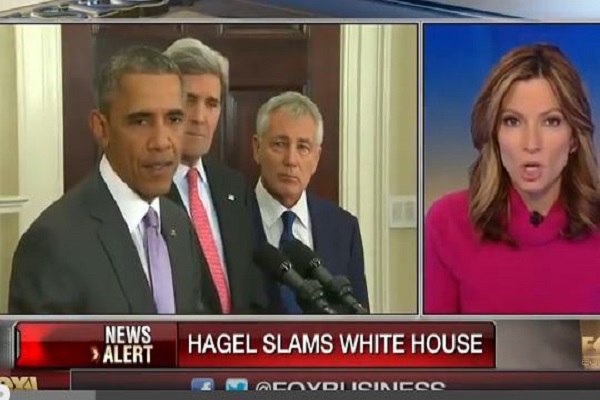 As late as November 19, 2014, Hagel told Charlie Rose that he didn’t wake up in the morning worried about his job, and in less than a week, on the 24th of November, news broke that Hagel had “stepped down.”  Despite the rumors addressed by Rose, people were surprised by the news, and Joe Biden is reported to have been “ticked off” by the move.

At the time, The New York Times reported that Hagel had stepped down “under pressure” from the White House.

Aides said Mr. Obama made the decision to remove his defense secretary on Friday after weeks of rising tension over a variety of issues, including what administration officials said were Mr. Hagel’s delays in transferring detainees from the military prison in Guantánamo Bay and a dispute with Susan E. Rice, the national security adviser, over Syria policy.

. . . . In reality, Mr. Hagel was never able to penetrate the president’s tight national security team of West Wing loyalists, officials at the White House and the Pentagon said. And faced with the calls for a shake-up of his national security staff to better deal with an onslaught of global crises, Mr. Obama balked at the idea of replacing Ms. Rice, Secretary of State John Kerry or the powerful White House chief of staff, Denis R. McDonough.

Hagel, a former Republican senator from Nebraska, wasn’t entirely popular with many on the right due to his support for the swap Obama made of a deserter (Bergdahl) for five top Taliban terrorists, his contemptible views on Israel, and an assortment of other questionable stances and actions.

The 69-year-old former Nebraska senator and Vietnam War veteran, speaking for the first time about his treatment by the Obama administration, said the Pentagon was subject to debilitating meddling and micromanagement by the White House — echoing criticism made by his predecessors, Robert Gates and Leon Panetta.

Looking back on his tenure, Hagel said in the Dec. 10 interview that he remains puzzled as to why some administration officials sought to “destroy” him personally in his final days in office, castigating him in anonymous comments to newspapers even after he had handed in his resignation.

Although he does not identify her by name, Hagel’s criticisms are clearly aimed at Obama’s national security advisor, Susan Rice, and some of her staff. Hagel’s former aides, and former White House officials, say the defense secretary frequently butted heads with Rice over Syria policy and the U.S. military prison at Guantánamo.

In a disturbing revelation, Hagel reveals that he planned a response to Syria’s use of chemical weapons in defiance of Obama’s “red line” and was told to stand down.

It was Aug. 30, 2013, and the U.S. military was poised for war. Obama had publicly warned Syrian strongman Bashar al-Assad that his regime would face consequences if it crossed a “red line” by employing chemical weapons against its own people. Assad did it anyway, and Hagel had spent the day approving final plans for a barrage of Tomahawk cruise missile strikes against Damascus. U.S. naval destroyers were in the Mediterranean, awaiting orders to fire.

Instead, Obama told a stunned Hagel to stand down. Assad’s Aug. 21 chemical attack in a Damascus suburb had killed hundreds of civilians, but the president said the United States wasn’t going to take any military action against the Syrian government. The president had decided to ignore his own red line — a decision, Hagel believes, that dealt a severe blow to the credibility of both Obama and the United States.

“Whether it was the right decision or not, history will determine that,” Hagel told Foreign Policy in a two-hour interview, his first extensive public comments since he was forced out of his position in February. “There’s no question in my mind that it hurt the credibility of the president’s word when this occurred.”

Hagel also reveals what we all suspected . . . Obama has little to no idea what he is doing in the Middle East or what is happening in the world.

The former Pentagon chief offers a view from inside an administration that was caught flat-footed by the multi-sided conflict in Syria and by the subsequent onslaught of the Islamic State. His account describes an administration that lacked a clear strategy on Syria during his time in office and suggests that it may not have one anytime soon — despite the mounting carnage and waves of refugees.

It didn’t help, says Hagel, that he didn’t get to meet with Obama alone; there were often others from Obama’s inner circle present (no names are mentioned, but we can *cough* Valerie Jarrett *cough* guess).

When Hagel was offered the job of defense secretary after Obama’s re-election in 2012, a position that he said he never asked or lobbied for, his only request was that he be given access to the president.

Once he was in office, Hagel’s request was generally granted. But he sometimes found that access to the president did not necessarily mean a one-on-one meeting in the Oval Office.

“There were times that I had called over and asked to have a private meeting with the president, and when I showed up, there were others in the room,” he said.

Hagel was also called to task for speaking frankly about ISIS in 2014:

Asked at a press conference in August of that year about the nature of the threat posed by the Islamic State, Hagel told reporters that “this is beyond anything that we’ve seen.” He cited the group’s military skill, financial resources, and adept online propaganda as an unprecedented danger that surpassed previous terrorist organizations.

Some administration officials were not happy with Hagel’s description, and “I got some criticism from the White House,” he said.

But events have vindicated his remarks, he said.

“Then I got accused of trying to hype something, overstate something, and make something more than it was,” Hagel said. “I didn’t know all of it, but I knew we were up against something here that we had never seen before. And in many ways, we were not prepared for it.”

While the Obama administration probably has no problem with current Secretary of Defense Ash Carter using private email for work, they probably do take issue with his stating the obvious about ISIS:  it is not contained.  I wonder if his days are numbered, too.

I don’t know why people are so cranked to have Hillary as President. She won’t be the first woman president, because that title went to President Jarrett seven years ago.

Hagel just wasn’t a good enough judge of character or he never would have agreed to take that job with this administration. It wasn’t ever going to end well. One works for a malignant narcissist at one’s own peril.

On the contrary, Panetta, Gates, and Hagel were all likely trying to keep our defense as strong as possible in the face of a dovish Administration. Taking that job against the odds was remarkably selfless on all their parts.

The cowardly act would be abandoning the nation’s military to the tender mercies of Valerie Jarrett without even trying.

The birthplace of the Second Caliphate.

A question: Does it really matter whether Obama is acting based on ignorance of world situations or based on an intent to further diminish the status of the US?

The result is the same in either case and Obama is modesty satisfied with that result; Although I suspect he wants to further diminish the US both in terms of status, the relationships with our nation’s traditional allies, and its internal strength, to the extent he can.

And, while Obama is not a successful president in terms we usually consider, in terms of his desire to radically transform the US, Obama has been way too successful.

His success, that radical transformation, is to our everlasting sorrow. Even when the US fully recovers from the Obama years, it will take years to repair his damage, his rampage of self-hate.

I think it does matter, Doug. I see Obama as John Bolton does, as the biggest threat we face in terms of national security. Does it matter whether he’s that because he’s stupid or complicit in our nation’s fall? Well, yes. Of course it matters.

On the one hand, he’s an idiot ideologue with no idea what he’s doing, and on the other hand, he’s a traitor to his oath of office and to this nation. Does it matter which? Well, yeah. I think it does.

Does it matter in terms of results (the fundamental transformation of America)? Well, yes, because if he’s shown to be the fraud that he is, everything–everything–can be rolled back, and if he’s shown to be not an idiot ideologue but actually complicit in the collapse of ME dictatorships that worked with the U. S. and the rise of Islamists from ISIS to the Muslim Brotherhood, then he is a traitor who not only betrayed his oath of office but actually worked against America.

Obviously, nothing would come of that, even if he stood up in the SOTU and pledged allegiance to ISIS, but it would matter nonetheless. No?

Agree. Nothing will affect Obama at this point, but he can be used as a case in point to warn voters against trusting the next smooth-talking “peace” Democrat. Or his co-architect of failure, Hillary.

Obama wants to give our base at Guantanamo bay back to Cuba. That’s all there is to it.

Obama saying ISIS is using the existence of our humane prison for enemy combatants to recruit is as phony as Hillary’s saying an obscure video or a Donald Trump video clip is somehow more to blame for ISIS then she and her idiot boss are.

One would think she, of all people, would steer clear of mentioning anything that would remind us of her villainy in Benghazi.

Hillary saying a Donald Trump has to relinquish his right to free speech because ISIS it using it as a recruiting tool is an ugly attempt to USE US to make Donald Sit Down and Shut Up and most of all to Stop Shouting the Truth.