Too many tire tracks on his back. 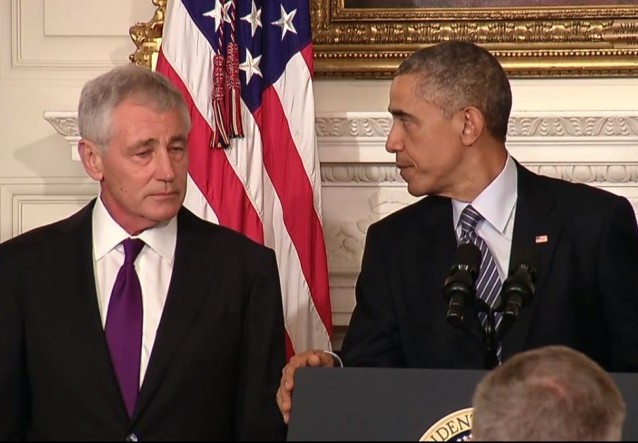 The lone Republican in the cabinet, Hagel was supposed to lend credibility to Obama’s downsizing of the military and retreat from international engagement. Hagel recently announced a realignment and refocus of the military, including some expanded capabilities.

Now Hagel is resigning under pressure, according to numerous media reports.

Defense Secretary Chuck Hagel is stepping down amid criticism of the president’s national security team on a series of global issues, including the threat posed by the militant group known as ISIS.

The officials say the White House has lost confidence in Hagel to carry out his role at the Pentagon. According to one senior official, “He wasn’t up to the job.”

Another senior administration official said that Hagel has been discussing a departure from the White House “for several weeks.” 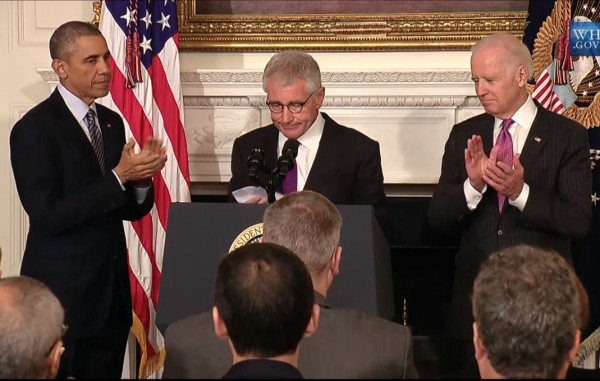 Now Hagel can join Gates and Panetta in writing a book about how the Obama White House weakens American security. It will be a good read.

Listening to Obama, Chuck Hagel did a great, great job and is a truly great guy. How could he be leaving after just 20 months?

Obama doing everything he can to suggest Hagel's decision to leave is his own. Which reporting suggests it is not.

.@NRO @jimgeraghty Bizarrely WH says Hagel not up to job. His job was to be WH doormat and he was brilliant at it.

He should have fired the “commander in chief.”

Obama can run but he can not hide.

Obama’s ‘failure’ is his success. This Hugo Chavez wanna-be is out to turn America into Venezuela II.

And unimpeded by the likes of scumbag cowards like Boehner and clueless hacks like McConnell, Prebus and Rove, he will come very close if not succeed altogether.

From the comments at the milblogs, the targets may simply have been competent, and much more so with respect to the removals at the lower levels of officers.

Hagel was fired for recognizing the real threats of ISIS and Iran and the need to address them.

But the fact is he was never qualified to run a cabinet agency. The largest operation he had ever run in his life was his Senate office staff.

Some of you touting Senators for President without any management experience should think again – especially in a year when our Party is awash in well-qualified and successful current and former Governors.

But then, many of you are sworn enemies of the GOP now, anyway, with our leadership in House and Senate being reelected unanimously, so you’ll probably be out forming your own party, right?

Why are you so ugly to people?

He didn’t let ScamWOW underbus the military on the threat of ISIS, making it clear that the military had been telling The Golfer for a dog’s age about the situation.

And I got hints that Hagel had reformed his ideas on the reduction in military force, but that could just be an impression I had.

Oh, and the military was not quaffing the Koolaide on the Ebola quarantine, and Hagel backed them up.

In any event, this is about ISIS and the catastrophic failuressssss of Obama regarding that. Which won’t change at all if Hagel is gone.

No, you have that completely incorrect. What happened was, down in Ferguson some New Black Panthers were arrested with guns and bomb making materials. Once Obama found out that these children who look a lot like him, had expertise in military matters, he needed to remove Hagel so he could appoint Shabazz el Mohammed as Secretary of Defense.

When asked about his appointment as Secretary of Defense, Mr. el Mohammed responded, “Where de fence and how high are it? I can blow that M….F….. up!”

Same two idiots who tried a gun straw purchase. (Yah, you gotta suck really hard to get a gun through that straw. Hah!)

I guess today is my day to correct you, Rags. It is the gun that can be used as a straw. They simply put the barrel end in their mouth and submerge the handle end in the Kool-Aid container and suck. If no liquid comes out of the barrel end, they need to release the valve by pulling the trigger, which will open the valve.

Simple. Really simple from a Darwinian point of view.

They can also be used as a bong.

I read on the interweb…

We’ve been watching Obama gut the military leadership, straight down to captains and lieutenants.

We’ve also been watching Obama militarize every department of the federal bureaucracy and buy billions and billions of rounds of ammunition meant for small arms fire.

We’ve been watching Obama import plague and foreigners into the nation.

What is it about the imposition of martial law that everyone is so looking forward to that we tolerate leadership in the GOP actually enabling it, let alone failing to fight a lunatic occupying the Oval Office?

Hmmm. Obama may want to rethink this. GOP RINO doormats like Hagel are hard to come by.

All Democrats need are one or two RINOs every so often. And RINOs, like Original Sin, will torment humanity for the rest of time.

“A RINO a day keeps the Republic Away!
…..Have you had your RINO today?”

Hell, he could put up the Wrong Rev. Jeremiah Wright as the new Sec.Def.

bingo.
I could never be considered a fan of hagel but I think he was finally starting to stand up to the administration and so…jarrett says he has to go.

Several people in Obama’s inner circle have fallen on their swords in an effort to keep the Anointed One’s skirts clean. Hagel said several things lately that displeased Him and were contrary to His pronouncements, so he was thrown onto his sword by Obama.

And the little child still insists that the Emperor is naked!

Word is ALSO that Hagel pissed off Susan Rice. Hell hath no fury…as all of us XY types know…

WWJD? Now we know. Valkyrie Jarret will take command from inside the WH.

The best choice right now would be David Petraeus, who might be willing. We’ll probably get Tom Harkin or Mark Udall instead.

That would actually be a brilliant choice! Which is why Obama would never do it.

It’s pretty brutal when one of the people firing you is Joe Biden.

At least he won’t be the fall guy for the extension of the Afghan war.
About which, US policy becomes more incoherent days by day
http://www.powerlineblog.com/archives/2014/11/u-s-to-maintain-afghan-combat-role-through-2015-but-why.php

Any guess as to who Obama will nominate as the new SecDef? I would not be surprised to see Susan Rice’s name being called ,and the Obama administration playing the gender and race cards to ram her through.

Betting pool, next Sec of Defense:

We are ALL the fall guy for Obama. It’s our fault.