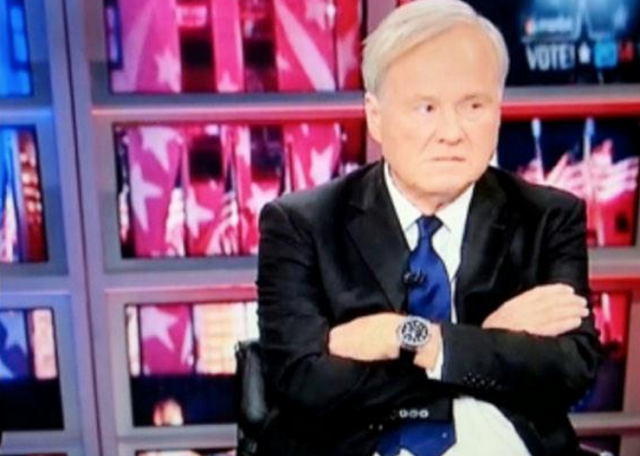 If you think the mainstream media is not as much in the tank for Hillary as it was for Obama, you have not been paying attention.

“Thrill up my leg” Chris Matthews is the poster-child for media bias. Which is why he has been such a frequent topic here, particularly during election cycles:

So I think it’s fair to mock him, to his face.

And that’s what Dan Joseph from Media Research Center did, to predictable results (transcript via Washington Free Beacon):

“We just wanted to know really quickly, how is your leg?” Joseph asked.

“The leg. Is the thrill still there in the leg or is it not?” Joseph asked.

“Is the leg OK? Are you limping or is it–?” Joseph asked.

Matthews told him he had a “psychological problem” and waved him away.

“We’re rooting for you over at MRC, man,” Joseph said. “Good meeting you.”

Joseph laughed as he walked toward the MRC camera that filmed the exchange.

Rule number one about being outspoken: if you can’t take it then don’t dish it out. Chrisy said it now he should own it. it’s called consequences.

Kathy Shaidle’s Rule No. 1 for understanding the Collective:

David Brooks, crease in the pants, next please.

OMG, I laughed so hard I had tears in my eyes. Did anyone notice how hard Chris was having to work to keep his face under control as the guy walked away?

The thrill is gone…..

He squeezed that lemon until the juice ran down his leg

alcohol withdrawals are a bitch

At least Matthews did not call Dan Joseph a “p_ _ _y” that is reserved for the man who thrilled Matthews leg.

Did I just witness assault? Or was it “Unwanted touching”?

I predict more people will wtach this video than watch Sissies show.

Like to see a lot more of this treatment to all the Left Stream Media types. Call them out on their bias and b.s.