How about pitting French Foreign Legion and Mafia against ISIS? 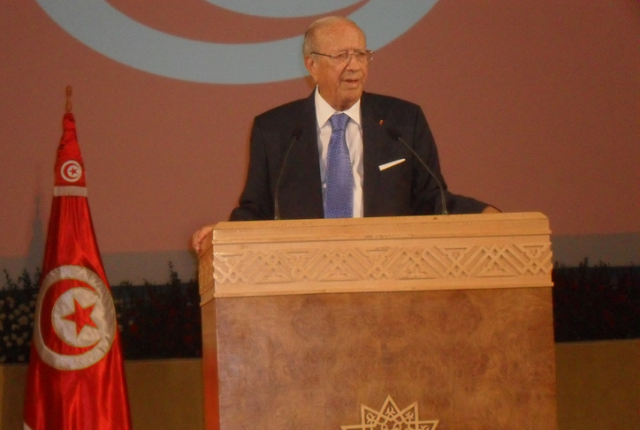 Another head-of-state has joined French President François Hollande in declaring war on ISIS.

Tunisia’s President Beji Caid Essebsi and his Interior Ministry issued a series of statements following an attack on the presidential motorcade:

NPR’s Leila Fadel reports that a spokesman for Tunisia’s Interior Ministry said at least 11 people were killed in the attack and 17 others were wounded. The state of emergency will last for 30 days and an overnight curfew is also in place until tomorrow morning local time.

…In March, militants opened fire on tourists inside the Bardo Museum, killing 24 people. And in June, a lone gunman killed more than three dozen tourists at a beach resort. The country also imposed a state of emergency after that attack, which was lifted last month, the Associated Press reports.

The news service adds that Tunisia’s president has declared “war” against terrorism and urged international cooperation in fighting it.

Tunisia has been struggling with civil unrest for some time. Readers may recall the 2015 Nobel Peace Prize winner, the Tunisian National Dialogue Quartet, is a consortium of groups which has worked to improve life in Tunisia in this turbulent era.

Essebsi has obviously come to the logical conclusion that high-level summits among bureaucrats is not the robust response needed to fight radical Islamic terrorism.

We recently noted that the US launched a coordinated air strike against 116 trucks ISIS was using to transport oil as part of its oil-smuggling ring. During that raid, the ammunition ran out:

At a Pentagon news conference last Wednesday, reporters wanted to know why American forces did not take out more than 116 trucks. Why not all 300, or something close to that? A U.S. official said the American attackers simply ran out of ammunition.

“There were 300, I think, to begin with, and then you hit 116. Why didn’t you go back?” a reporter asked Operation Inherent Resolve spokesman Col. Steve Warren.

“Frankly, the aircraft expended 24 500-pound bombs, and all of their ammunition,” Warren answered. “So they — they shot everything they had and then they had to go home.”

When reporters queried as to why there was a delay in targeting the trucks initially, Warren indicated that American officials were concerned about harming the truck drivers, who were working for the Islamic State but might not be ISIS themselves.

Between the attitude of our President and “American officials”, little wonder why some are weighing other options to defend themselves.

For instance, there is a call to retool the French Foreign Legion and inspire immigrants to fight for France:

As early as 1871, foreigners who fought for this unique military branch received the option of French citizenship at the end of their service. Even today, a foreigner serving France and injured in battle receives citizenship via a provision of “Francais par le sang verse” — “French by spilled blood.”

Such a program should be extended throughout the continent for newly enlisted combat troops. These forces could muster, train and stage in Syrian border countries Lebanon and Turkey — both nations were recent Islamic State terror targets. A successful military campaign could create the conditions for them to return home to Iraq and Syria; their sacrifice, service and sworn allegiance to coalition armed force nations should earn them the option to live and work in their new countries.

The son of infamous mob figure John Gambino says La Cosa Nostra is ready to fight ISIS in New York City — and that the Mafia can do a better job of protecting the city from terror attacks than the NYPD.

Giovanni Gambino said during an interview with NBC (below) that “the rise of global terrorism gives the Mafia a chance to show its good side.”

Minimally, pitting either the French Foreign Legion or Mafia against ISIS would make for an epic Hollywood film.

Freedom-loving people around the world clearly view ISIS and other Islamic radical terror groups as more of a threat than bad weather. It is heartening, at least, some world leaders have a realistic view of the true threat. Too bad ours isn’t one.

But considering Obama has no troops he controls nor leftist street thugs (#streetthugslivesmatter)positioned amongst the population by Al Sharpton and Valerie Jarrett, Beji has little to fear from an otherwise paper tiger like barry.

Barry can accomplish nothing if he can’t achieve it by cheating, fraud and while at the same time getting his ass wiped by propagandists when he craps all over himself.

Nor does Tunisia breed domestic ‘allies’ who are instead cowardly, backstabbing low-lifes like John Boehner and Mitchell McConnell.

People probably have Beji’s back. We can’t say the same for ourselves by counting on Pee Wee Presbus and GOPee.

The son of infamous mob figure John Gambino says La Cosa Nostra is ready to fight ISIS in New York City — and that the Mafia can do a better job of protecting the city from terror attacks than the NYPD.

*Snort*, are they going to charge vig on the offer and break some legs if they don’t get paid?
Elect Cruz, he’ll do it better by far.

The mafia tried a similar scam – and succeeded — during World War 2, by promising to protect the docks of NY from Nazi infiltrators. There were no infiltrators, just the mafia guys stealing everything they could get their hands on at the docks while the liberal idiots in the Roosevelt government who hired them looked the other way.

The French Foreign Legion has a long record as very effective fighters and no association with corruption as contrasted to the United Nations collection of cowards, thieves, and rapists.