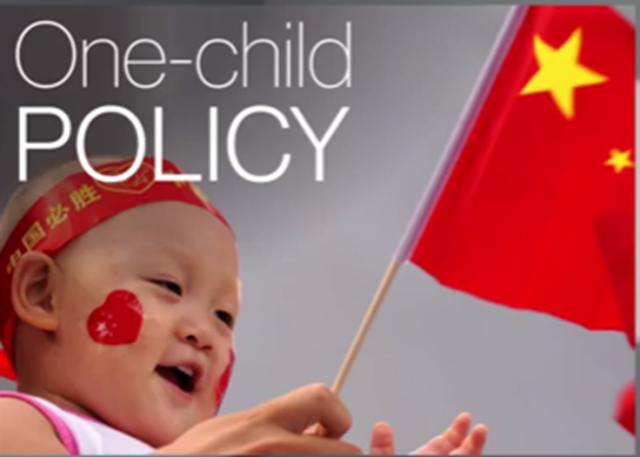 The United States has been engaged in a lot of international wrangling with China, between its high-tech espionage and escalating tensions in the South China Sea.

However, the unintended consequences of China’s one-child policy may have hit the country harder than any bomb. Though the nation is reversing its course on the number of births allowed, it may be too little too late.

However, any boost to China’s population would not materialize for at least a few decades, experts say, a vexing reality for Party officials concerned about a shrinking labor force and slower economic growth. Additionally, Chinese families’ preference for boys has resulted in millions more men than women in the country, a gender imbalance that has exacerbated abuses such as the trafficking of rural women.

“Even if couples started to have two children tomorrow, we still have 20 to 25 years worth of children who will grow up, and so that shrinking of China’s labor force and abnormal sex ratios is going to continue among the young adult population for the next quarter century,” said Valerie Hudson, a professor at Texas A&M University’s Bush School of Government and Public Service, in an interview. “That horse has left the barn.”

The following video summarizes the key issues that have lead to China’s new rules:

Melanie McDonagh, contributor for the British publication “The Spectator”, recounts the brutality of the Chinese policy and the lack of feminist protest about what turned out to be a slaughter of millions of girls. She also noted chilling attitude of academic elites.

What struck me personally though was that you’d get, in private conversations, academics with an interest in the environment and population, who would frankly admit that although the policy was no doubt unfortunate, it was necessary for its global environmental benefits. One was a then head of a Cambridge college. It was a useful reminder that academic intelligence is no guarantee of moral groundedness.

The reprehensible policy has backfired, creating a dearth of potential employees and support for millions who are soon to retire. Other economic consequences included bride-price scams.

The lack of women in rural China resurrected the old, feudal practice of a bride price, or chai li. In the ’90s, chai li prices shot up to the point where it was the equivalent of a decade’s worth of farming income. If a man wanted to marry someone, his whole family had to beg and borrow from all the relatives. And that created a whole scam market.

One villager I met had been introduced to a girl from a different province. He married her and then other men in the village asked her to introduce some other brides to the community. So she introduced some of her friends. Everybody got married and thought it was all going to be good. But a month after the bride price had been paid, all these brides just disappeared.

However, it looks like the end of the one-child policy will not reverse the unintended consequences. Today’s lifestyle choices, even in China, make the no-child option much more appealing.

One critical problem is the high cost of real estate, particularly in China’s most important cities, which makes it difficult for young couples to attain the space to house a larger family, let alone leave them sufficient financial resources to raise the children. China’s main cities have suffered arguably the world’s most rapid growth of property prices relative to income. Last year, The Economist estimated house price to income ratios of nearly 20 in Shenzhen 17 in Hong Kong and over 15 in Beijing, between 50% and 100% higher than ultra-expensive Western places like San Francisco, Vancouver or Sydney.

This explains in part why prosperous cities like Shanghai and Beijing, now have among the lowest fertility rates ever recorded — down near 0.7 per woman, or one-third the replacement rate. If the experience of densification and high prices spread to other Chinese cities, officials may be lucky if couples even bother to have one child.

Condom manufacturers are the hardest hit by the change.

The Marxist eugenic movement may be our undoing. America has an unfortunate deference to PhD’s who are educated beyond their natural intelligence.

Condom manufacturers are the hardest hit by the change.

Really Leslie! Are you really just going to leave that one hanging out there at the end like that and not drive the hard truth home? 😕

It’s not just the loss of labor force that hits China so hard.

As with all socialist/communist “utopias”, it takes other people’s money to survive.

Next it will be a “disappearing” of the aged, since they have no resources to provide for them, I predict.

Good article. I hope – irrationally, perhaps – that the youth of Europe and this nation realize that socialism and communism mean death – to people, to societies, to liberty.

“As with all socialist/communist “utopias”, it takes other people’s money to survive.”

And in our own flirtation with Collectivism, we’ve learned the trick of making those other people we’re taking money from out own progeny.

A lot of the thieves won’t be here to face the music, and they just don’t care.

The obvious answer is that after decades of slaughtering their unborn children, they will now need to spend several decades euthanizing their elderly to compensate.

The academic left will sagely nod their heads i agreement that for the environment, etc this is the best thing that can be done.

Central planning at its best? Only the Chinese failed to see the impact of this policy. In addition to the over abundance of male births, China is a society of first born and only children which leads to too many of that type of personality traits. There are no youngest child risk takers or the middle child negotiators.

China has millions more men of military age than it has women to marry them to. It will soon have a rapidly aging population which has come to expect a better standard of living than their parents and grandparents had.
Since material wealth can to some degree offset demographic poverty, China is making a grab for all the oil and strategic minerals it can get its hands on; they have to be eyeing what the WWII Japanese called the “Northern Resource Area” pretty hard. That may help explain why Putin is saber rattling – and getting more combat experience for his military.
His Barryness’ engineered decline in American power is certainly a factor, but China pretty much had to do something before their window of opportunity ages out.
China also has leaders who are the heirs of the creators of the Great Leap Forward, the Cultural Revolution, and the Tiananmen square massacre.

I remember the howls over that part from some quarters, mostly along the lines of “That could never happen here!”

That was before the China “one-child” policy, which was resisted in 1953, encouraged in 1975, and imposed in 1979. http://www.theguardian.com/world/2013/nov/15/china-one-child-family-policy-timeline

Meanwhile, in the West, most first-world countries have taught their young in school that there are already too many people for the world to support, and they now have less than replacement population growth. Our best and brightest now think that the solution to the problem of underpopulation is to import a vast army of what looks remarkably like young, male, religious zealots.

There is a reason why the Republican field of candidates is so diverse: a large number of American citizens want the social engineers who think they are entitled to make decisions for us to kindly STFU while we fix the messes these fools have made.

PS. Donald Trump would not be half so popular right now if Nancy Pelosi and Harry Reid had not completely cut the Republican Party out of the legislative process. That is, they acted like Chinese communists instead of Americans.

America retains its selective-child policy. While we abort over one million Americans annually, the outcome may have been less obvious if boys and girls were chosen as victims in equal numbers. Also, we import several million immigrants, aliens, and refugees annually to quietly compensate for the unprecedented loss of human life in the abortion and Planned industries.

Do the Chinese also debase human life with Planned/cannibalism protocol?

The Chinese progress to a libertine state is remarkable, but its left-wing only has itself to blame for violating human rights.

The Cultural Revolution, roughly 1965 to 1975, left much of the population at that time with no spiritual rudder. Spiritual beliefs were replaced by Maoism, which is now gone. What replaced it? Really nothing. China will face some serious ethical dilemmas as the current working adult population ages and leaves the workforce at the mandated retirement ages of 55 for women and 60 for men. Too many people faced with having to make tough decisions will do so with no structured or formal ethos to help guide them. Expediency will rule. There will be terrible events.

The New York Times had an article toiday on page A12 about unofficial children.

They can’t go to school or get married or have a child or see a doctor or often find a job [they are without papers – undocumented, and without a residence permit anywhere], unless and until their parents pay a fine. There are about 6,500,000 Chinese in this position.

The fine for the girl featured here would have been $800 in U.S. Dollars but might be much higher now. Some families have paid thousands of dollars to legalize their chidren. Official policy actually says that these children are entitlted to residence permits but that often wasn”t done because there was too much pressure to meet family planning quotas.

Her parents would have been eligible for another child because they had disabilities, but they didn’t jump through the hoops. (perhaps she wasn’t planned. Her sister was 8 years old when she was born.)

Her mother had considered an abortion but doctors said it was too dangerous.