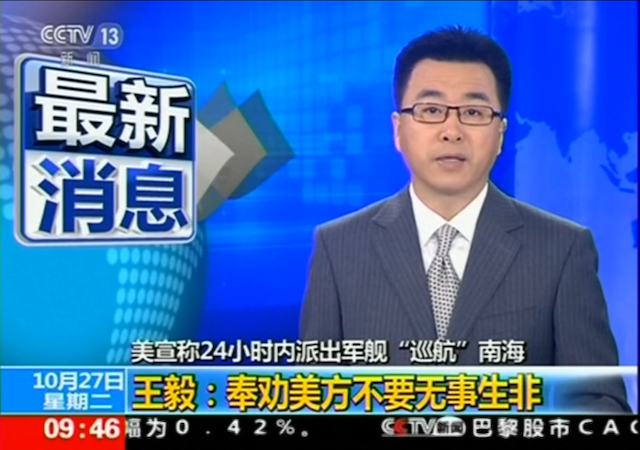 Earlier this week, the Pentagon announced that the U.S. Navy planned on sending a destroyer into disputed waters in the South China Sea. In the first of a series of missions, the USS Lassen would breach the 12-mile “buffer” zone around the man-made islands in the Spratly archipelago as a way of challenging China’s belligerent assertions of sovereignty in those waters.

Today, China rebuked the US for this “freedom of navigation” patrol, protesting it as a form of harassment, and announced that they had “shadowed” the Lassen:

The U.S. destroyer sailed within 12 nautical miles of Subi Reef, one of seven artificial islands built up by China in the past year.

A Chinese guided-missile destroyer and a naval patrol ship shadowed and gave warnings to the U.S. warship “according to law”, China’s Defense Ministry said.

The U.S. patrol was a “coercive action that seeks to militarize the South China Sea region” and an “abuse” of freedom of navigation under international law, it said.

China’s navy said the “air arm” was also involved, but gave no details.

The Chinese government broadcast a statement over state-run CCTV, telling the US to “think again,” and to not make trouble for nothing.

The media followed a similar narrative, accusing the United States of harassing China. More from The Guardian:

Twenty-four hours after Washington challenged Beijing’s territorial claims in the region by deploying a warship to waters around the disputed Spratly archipelago, the notoriously nationalistic Global Times accused the Pentagon of provoking China.

“In [the] face of the US harassment, Beijing should deal with Washington tactfully and prepare for the worst,” the newspaper argued in an editorial on Wednesday.

“This can convince the White House that China, despite its unwillingness, is not frightened to fight a war with the US in the region, and is determined to safeguard its national interests and dignity.”

The People’s Liberation Army Daily, China’s leading military newspaper, used a front-page editorial to accuse the US of sowing chaos in countries such as Afghanistan and Iraq.

“Cast-iron facts show that time and again the United States recklessly uses force and starts wars, stirring things up where once there was stability, causing the bitterest of harm to those countries directly involved,” the newspaper said, according to Reuters.

China asserts indisputable sovereignty over the waters in this region—a claim that has been rejected by several governments, including the United States. The problem is that, although international law allows nation states to claim waters within 12 nautical miles of their coastal territory, those provisions do not apply to reefs or other mostly-submerged masses that have been built up, or “reclaimed.”

The Pentagon has responded to China’s protests by asserting the right of all nations to freely navigate the South China Sea.

Featured Image via CCTV and Reuters.

Meanwhile, SecDev Carter is sent to tell America direct military action will commence in Iraq after Obama looked us in the eye last year lecturing there will be no more boots on the ground in Iraq.

There must be some pressure for the surrenderer-in-chief to admit he sucks at decision making.

Perhaps the Clinton’s complained about him leaving a bloody mess to clean up? And have information Obama doesn’t want to be made public as a baseball bat?

China expanding its military reach into the South China Sea, it’s rapidly building completely NEW islands, and generating plenty of anxiety from the other nations in the neighborhood.
China is taking desolate reefs among the Spratly Islands and building them into man-made bases.

eventually become highly defended stationary “aircraft carrier battle groups” where they could house fighter aircraft, long range sensors, and missile systems – both of the surface-to-surface and surface-to-air variety. In doing so, China would be in the process of creating a fortress-like network of sea bases where it could project power and literally control the flow of a large portion of the world’s shipping.

IMHO: Obama is a klutz, ignorant on many subjects, quite often is not the smartest man in the room, doesn’t understand how governments relate to one another, including our own government, federal, state, and local. And, that all is a big “so what!”

However, Obama is accomplishing his goal of radically transforming America, which in his mind, means weakening the US militarily, monetarily, domestically, and diplomatically, all of which he has in fact done.

The only way to view Obama, and his actions, is that he is committing acts of pure malice against the US.

So, does it matter than often Obama acts like his brain is solid rock, his morals are as firm as that of a jelly fish, and he won’t know the truth if it hit him in his ass? Obama’s accomplishments are now most visible, unfortunately, with more vile results to come.

I didn’t want to pick, but this is twice in a few days…

This is clearly Obama’s response to constant ongoing cyber attacks by the Chinese government and those acting on China’s payroll. His response is tepid. Again. But Obama can tell his base he, ahem, ‘stood up’ to the Chinese. He can now expect Chinese cyber attacks to double. I advise all to go off the grid for the next few months, lol.

I still think the best response to China in this respect is a parade made up of every country with a blue-water navy sending one of their ships through the ‘disputed area’ with flags flying.

Hear, hear! Yep, except, make that 4-times a year, each passing closer than 12-miles to each constructed island, sounding their klaxons on each pass.

and if Teddy were president now….he would do same as you suggest but we have a pansy in the WH now..one who believes in ‘finding common ground’
ie what neighborhood organizers do..but trouble is China and a host of other nations does not recognize that or Hillary’s ’empathize’

Shall we stay focused on ‘artificial’ part? Artificial as in land
fill which they claim is their habitat HOWEVER given fact
Chinese have been LIARS and THIEVES for centuries
why should anyone find this out of order?

Why doesn’t Obama realize global warming could be our greatest ally; these man-made reef islands will be back underwater within 50 years!!!

Maybe we could have a headline that clearly stated they verbally ‘lashed out’ at America over our Naval exercises. Perhaps a country that can do anything from disrupt our economy or launch serious cyber attacks to actual nuclear war maybe we want to be clear what level of ‘lashing out’ they are doing in response to our military exercises?