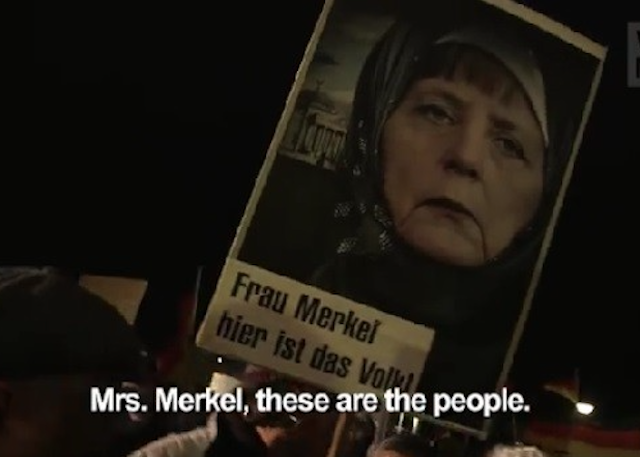 As German Chancellor Angela Merkel doubles down on her open-border policy just days after the deadly Paris terror attacks by reiterating her government’s willingness to absorb more migrants, the political landscape in changing rapidly before her eyes. The anti-immigration party AfD that was just above 3 percent in opinion polls as recently as August, is now polling above 10 percent.

Established in 2013 as a grassroots reaction to the EU’s monetary policy, the party has skyrocketed to the country’s third largest political force. AfD (Alternative for Germany) has aligned itself with the anti-Islamisation movement ‘Pegida’, drawing impressive crowds to its rallies, especially in the eastern part of the country.

Chancellor Merkel, who made a successful academic career in communist East Germany, allegedly even holding the position of Secretary for Agitation and Propaganda “Agitpop” at the communist youth movement (FDJ) before she joined the West German Christian Democratic Party after the German Unification in 1990, is today ideologically committed to the open-borders policy despite her nose-diving popularity at home:

Merkel’s stance in the aftermath of the Paris terror attacks underscores her willingness to court political risk and resist pressure within and outside her party bloc to close Germany’s borders. Amid speculation that one of the suicide bombers entered the European Union as a refugee, Merkel has said that asylum seekers shouldn’t have to bear the blame for last week’s attacks.

“We’re a strong country, we’re a prosperous society and we have the strength to help,” she told a conference on integration Tuesday in Berlin. “We should not only talk about the burdens that this challenge brings to us, but also the opportunity.”

As Merkel pursues international diplomacy to try to curb the flow of refugees, support for her Christian Democratic Union rose 1 percentage point to 35 percent in an INSA poll for Bild newspaper. Even so, the Alternative for Germany party, which wants to curb immigration, gained for the second consecutive week, polling 10.5 percent. [Bloomberg Business]

The ISIS terrorist attacks in Paris were followed by a series of bomb alerts and police raids targeting suspected Islamist cells across Germany. On November 17, German authorities called off a soccer match between Germany and Netherlands in Hanover after receiving a tip from French police of a Paris-style terror plot. Police in major German cities are now beefing up their presence ahead of as traditional Christmas markets due to open soon.

In the aftermath of terrorist attacks in Paris, Germany’s political class still remains firmly in denial about the threat of rising Islamism in the country and Europe as a whole. Their ideological commitment trumps the hard facts on the ground. Police investigations in Paris have again confirmed everyone’s worst fears—that the Islamic State is using refugee routes to sneak in operatives capable of carrying out terrorist operations on European soil [reported by Legal Insurrection on November 09, 2015]. The rise of the AfD party is a direct result of the reluctance shown by mainstream German political parties to address the genuine concerns of their citizens amid spiralling migrant crisis.

Merkel has already announced her intentions to run for a fourth term in the 2017 German parliamentary elections. Despite Merkel’s dipping poll numbers, there is hardly any political rival within her Christian Democratic Party to challenge her candidacy. Even if the outcome of the 2017 elections remains wide open, Merkel’s policy of mass-immigration is poised to “fundamentally transform” the Christian demography of Germany and Europe with a few short years.

“An appeaser is one who feeds a crocodile, hoping it will eat him last.” – Sir Winston Churchill

And in an effort to deflect criticism she turns to Israel and criticizes them for building new homes for it’s citizens. Merkel’s heart is full Nazi. Always blame the ‘jews’.

It’s not “anti-immigration”. That’s their characterization.

It’s pro-native and immigration with the presumption of assimilation and integration.

The pro-immigration people also happen to be pro-choice, which implies abortion and planning of over one million natives in America annually.

” Despite Merkel’s dipping poll numbers, there is hardly any political rival within her Christian Democratic Party to challenge her candidacy.”

NONSENSE. Wolfgang Schäuble has been deeply critical of Merkel, and there has been much speculation of the CDU putting him her place. It would be no surprise if Merkel were gone by the end of the year.

The removal of Merkel is a pre-requisite for the defense of Germany. But it is far from the only step necessary. If she is deposed as Chancellor, there will be new elections. Look at the Parties in Germany.

AfD and PEGIDA are the only ones who are opposing the Muslim invasion. Merkel’s CDU/CSU majority may be lost, but there is serious talk in Germany of a coalition government of the CDU/CSU remnant in such a case joining with the Social Democrats, Die Linke, and the Greens. All three of them fervently favor the Muslim invasion and all of them are terrified of AfD and PEGIDA. Kinda like both wings of the American Governing Party are terrified of the TEA Party and will act jointly to oppose them.

I find it sehr interresantes that just as the Gadsden flag popped up as a symbol in this country, this flag has become common at AfD/PEGIDA rallies:

This is the Josef Wirmer flag, intended by those members of the German resistance that tried to assassinate Hitler in 1944 to become the new flag for a post-Nazi Germany if they had succeeded.

Interesting symbolism. Hard to claim that they are a Nazi-racist movement.

Germany will quickly lose its balance of power (and the EU its standing) as migrants refuse to assimilate into nihilism.

Everywhere one looks, governments are acting in opposition to the will of the governed.

The western ruling classes just don’t get it, but they will.

The Weimar Republic helped pave the way for the Nazis. If current Euro-lefties think what they are doing is any different — well, who the hell knows what they are thinking.

Why won’t these idiot politicians pay Ukraine, Romania and Bulgaria to keep these invaders safe, in camps surrounded by armed guards a barbed wire? They could stay there until it’s save for them to return home.

Yeah I agree “anti-immigration” is the wrong characterization. That’s the language of the open borders “free society” globalist elitists.

The leftists use the Nazi badge of shame like divisive Dems here say all whites have KKK blood. Yet it is the globalists that now want to force free peoples to live under the iron rule of an academic elite, trampling out our hard won decentralized liberties. “Prove all things, hold fast to that which is good”.

A nation is pro-posterity … with ethnic, geographic, cultural society, organically developed over centuries. The multi-culti academic left is the wrecking ball, that sites Diversity as some kind of divine command, with the insanity of moral equivalence deployed as its tactical weapon. The cultural Marxists recognize they must explode the structural supports, before they can build their Orwellian nightmare, or brave new world.

The tea party was indeed grass roots, and the establishment of both parties saw the danger of “we the people” rising in unity. So the left answered with astroturfed “occupiers”, and the RINOs demeaned tea partiers as whacko birds and racists. So the TP was marginalized (personified in the Sarah Palin attacks), but “we the people” are still singing.

Germany has apparently maintained enough of their culture to remain productive, but their masses are surely tired of the rule from Belgium “thinkers”, and tired of subsidizing the PIIGS. A NATO alliance is one thing, but an EU scrambling of cultures is quite another.

Hopefully the “pro-posterity” Germans will come to their senses, and vote out the globalists that equivocate away all heritage and tradition, as our anti-American left does to US. The oligarchs would prefer to keep the proles divided and fighting with each other, as we see with the Democrats here.