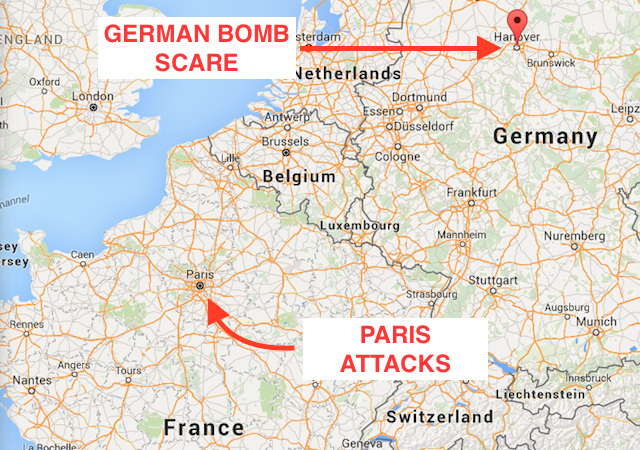 A soccer match between Germany and the Netherlands has been canceled over the “concrete threat” of a planned bomb attack.

Hanover, Germany is the latest site of two separate terror scares in the wake of Friday’s massacres in Paris, France. French intelligence officials gave the all clear just moments ago (as reported in a Fox News live broadcast) after a fresh tip prompted law enforcement to evacuate the area following a previous false alarm.

“We had concrete evidence that someone wanted to set off an explosive device in the stadium,” Hannover police chief Volker Kluwe told German TV. Referring to another bomb threat about an hour beforehand that turned out to be a false alarm, Kluwe said, “After the first object turned out to be harmless, we got a tip that had to be taken seriously that an attack was being planned.”

Investigators found a suspicious suitcase inside or near the stadium and a second suspicious device at the city’s central train station, German media and Sky News report. Police closed off part of the train station.

The nearby TUI-Arena was evacuated as well, and a planned concert from the German pop band Soehne Mannheims was canceled.
…
Police told soccer fans, “Move away from the stadium. Do not stand still.” They say the match was canceled.

There were no signs of panic, with most fans seemingly accepting the decision with resignation. Streets leading to the stadium had been sealed off before the all-clear was given.

The #GERNED game has been cancelled. #DieMannschaft are under police protection and have been escorted to a safe place.

The New York Daily News carried reports from the German newspaper Kreiszeitung that officials found an ambulance stuffed with explosives sitting just outside the stadium.

JUST IN: Officials found an ambulance filled with explosives outside the stadium: report. https://t.co/39O4nMVhVI pic.twitter.com/uwCcQYIQmf

According to Sky News, the profile for this match was quite a bit higher than normal—German Chancellor Angela Merkel and other members of the German government were supposed to be there:

Chancellor Angela Merkel and several other government ministers were due to attend the match to send a signal that Germany would not bow to terrorism in the wake of the Paris attacks.

They were not in the stadium when the game was called off and are understood to have returned to Berlin.

Spokesman for the German national side Jens Grittner tweeted that the team were en route to the stadium when they were diverted by police. He said they had been taken to a “safe place” and that he could not disclose any more information.

It comes as armed police patrol Wembley for England’s match with France.

The French and English soccer squads will proceed with their match at Wembley stadium tonight. Law enforcement officials in London ramped up their security presence around the venue, around transportation hubs, and in busy areas around the city.

Is the ambulance claim bull? I’ve seen it retracted in various places.

Peace of mind is lost forever in most of the European countries. After France any country with a muslim ghetto is a target. They have the enemy within and no Trojan horse is needed. Now any large gathering will always be suspect. That is what this scum has done to the world. If we had a leader he would declare WWIII and tell our allies that they need to prepare for all out war and do what FDR did at the beginning of WWII and put the Japanese into interment camps. It is looked on with horror today but at the time no one could tell a loyal American Japanese from a traitorous one. Even the families of these terrorist say that they were surprised by their sons action. That means that if they can’t tell how in the hell are we supposed to?

Actually, declassified documents show that FDR’s advisor’s were against the plan because Naval Intelligence reported that the Japanese American population presented no credible threat to US security or the war effort. But, yes, Islam and Muslims are different – they do represent a credible threat. Still, I have hard time with the idea of detention without probable cause. I don’t have a problem with turning foreigners (legal or illegal) out of the country. The illegals don’t belong here, the legals are here only with our forbearance, which can be retracted at any time. Our immigrations laws are permissive, they do not require us to take in anyone.

More salient, FDR blocked Jewish refugees from coming in. Anne Frank and her family were among those denied.

I’m not sure why the UN can’t create a green zone for these refugees in Syria or elsewhere in the middle east…I mean besides rampant incompetence and the fact that terrorists and criminals.

Aside from weaponized stupidity, there is no reason the refugees NEED to be on US soil or Western European soil.

I hear Guantanamo is pretty empty these days.

My deepest sympathy to any European who fought multi-culturalsim.

I hope the rest are really miserable living under Sharia law and the constant threat of terrorism.

Apparently the Daily Mail is trying to identify this guy, and the kiddies at Reddit are giving them all kinds of grief for it, because they don’t want him killed.

I think the European authorities are targets of disinformation.