“Obama is serving as an apologist for radical Islamic terrorism” 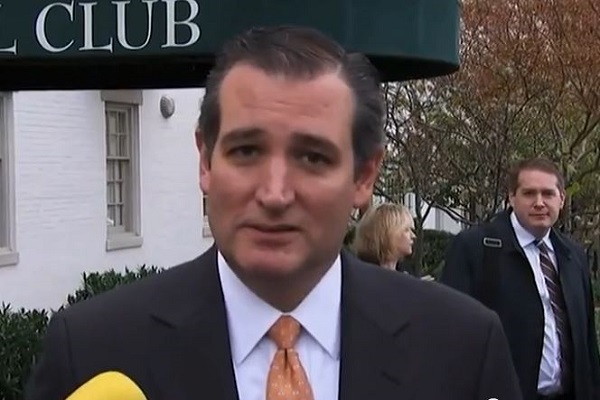 As Ted Cruz’s campaign gains momentum and as Obama continues to be more aggressive in his critique of Republicans than of ISIS, Cruz challenged Obama this week over comments made overseas regarding the Paris attacks, ISIS, and the Syrian refugee crisis.

Texas Sen. Ted Cruz on Wednesday said that if President Barack Obama wants to be critical of his rhetoric, he should “come back and insult me to my face.”

Obama has been critical of Cruz’s proposal for handling the Syrian refugee crisis, which includes allowing in Syrian Christians, but not Syrian Muslims. The president earlier this week called that approach “shameful,” adding, “we don’t have religious tests to our compassion.”

His campaign has followed this with a powerful new ad challenging Obama to a debate.  Watch:

While Obama complained in his Turkey presser about Republicans, Cruz appeared on Hannity and offered his own alternative to Obama’s feckless foreign policy.  From Hannity’s website:

Senator Ted Cruz joined Thursday’s Hannity to offer his plan to defend the country against the potential threat.

“If the president refuses to listen to our top law enforcement and intelligence community, it seems to me that he is willing to gamble with the lives of the American people,” Sean said to Cruz. “How can this be stopped?”

“Remember this is a president who refuses to say the words ‘radical Islamic terrorism’, just like Hillary Clinton in the Democratic debate, she could not utter the words ‘radical Islamic terrorism’,” Cruz responded. “If they won’t define the enemy then they don’t acknowledge the simple reality that they can’t vet whether the people they’re bringing in are terrorists and it is profoundly dangerous.”

“I am leading the fight in the Senate to stop Barack Obama and Hillary Clinton’s plan to bring in tens of thousands of Syrian Muslim refugees,” Cruz added.

In order to defend against the threat, Senator Cruz has introduced two pieces of legislation to the Senate.

The first, the Expatriate Terrorists Act, would strip U.S. citizens who pledge allegiance or provide support to foreign terrorist organizations of their citizenship. “We shouldn’t have ISIS terrorists coming back to America using U.S. passports in order to then wage jihad and then try to murder innocent Americans,” Cruz said of the legislation.

Obviously, Obama will not take Cruz up on his offer of a debate, and Cruz knows this.   The challenge not only allows Cruz to assert his strength on foreign policy without attacking the current GOP front-runner, but his challenge underscores effectively the fact that Obama is on the losing side of the argument about ISIS and the acceptance of Syrian refugees (given what we know about terrorist groups using the refugee crisis as a means of smuggling terrorists into Europe and the U. S.).  Indeed, left-leaning / progressive sites from HuffPo to Slate are noting as much, and even Hillary has suddenly decided defeating ISIS is a priority after all.

Not only are more Americans listing terrorism as their primary concern, but a Bloomberg poll shows that the majority of Americans do not agree with Obama on the issue of Syrian refugees.

Fifty-three percent of U.S. adults in the survey, conducted in the days immediately following the attacks, say the nation should not continue a program to resettle up to 10,000 Syrian refugees. Just 28 percent would keep the program with the screening process as it now exists, while 11 percent said they would favor a limited program to accept only Syrian Christians while excluding Muslims, a proposal Obama has dismissed as “shameful” and un-American. 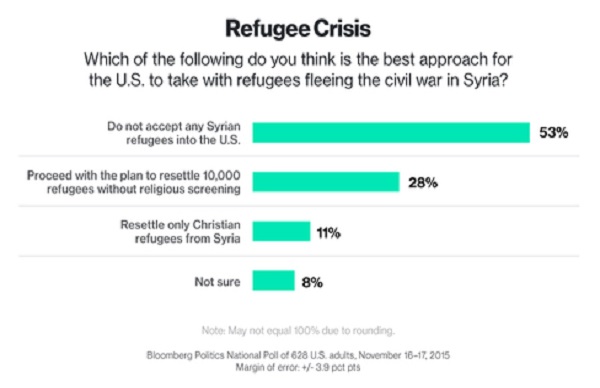 I, for one, would love to see a debate between Obama and Cruz on just about any issue from the Constitution to the refugee crisis, but Obama wouldn’t take that risk.  Not only is he not running for office, but he’s simply—as progressives are fond of saying—on the wrong side of history on this one.

Running against Obama is smart.

Now THAT would be a debate worth watching!

Too bad it will not happen.

Yep, Obama’s handlers were smart enough to program his teleprompter to tell him that Cruz would wipe the floor with his smug face.

It would be like taking candy from a baby.

Not at all surprising, that our President would shame us with ‘that’s not American’ when he is embarrassed by what is American.

How can I find videos of Ted Cruz rallys? When is the next one? Will it be live-streamed?

Hi Betty, there are a lot videos uploaded to YouTube of Cruz rallies, and Cruz has a YouTube channel on which he (well, his staff, I’m sure) posts some rally speeches: https://www.youtube.com/user/TedCruzforSenate/videos

You can check out https://www.tedcruz.org/ and his Twitter feed (@TedCruz) for information and updates. When you go to his website, you can also find videos and sign up to volunteer in your area and/or for email updates from his campaign.