Carly Fiorina: Obama “at his most passionate when he’s attacking Republicans”

Carly Fiorina: Obama “at his most passionate when he’s attacking Republicans” 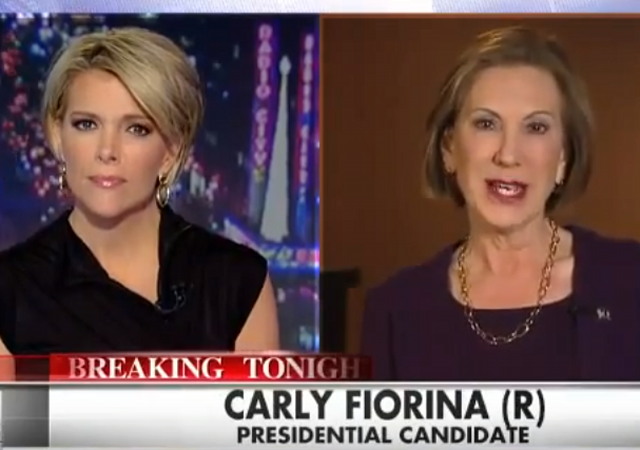 Carly Fiorina appeared on the Kelly File last night and offered a harsh rebuke to President Obama’s recent remarks regarding the terror attacks in Paris.

Fiorina pointed out that Obama is more comfortable attacking Republicans than he is talking about America’s enemies and laid blame at the feet of the president and Hillary Clinton who she charges with leaving a vacuum in the Middle East by prematurely pulling out American forces against military counsel.

When Megyn Kelly asks Fiorina what can be done domestically to stop the rise of ISIS and other terrorists, she says one of the most logical first steps would be to stop the flow of Syrian refugees who can’t possibly be vetted adequately.

She also correctly points out that military and intelligence operations in the U.S. are already overwhelmed and asks why we would add to that problem. She suggests that America needs more intelligence agents on the ground and then points out that there are more people working for the IRS than the FBI and the CIA.

Overall, it was a very strong appearance. Watch the segment below:

If you watched the video, at the beginning you saw Fiorina talking to a group in New Hampshire about this very issue. She apparently made quite an impression.

But a silence fell on a packed room of about 150 students, area residents and supporters at a town hall-style meeting when Fiorina criticized President Obama for his words on a television program Friday morning, just hours before the Paris terrorist attacks that killed at least 129 people and wounded hundreds more.

“How infuriating,” she said. “For our President to say on national television hours before the Paris attacks that ISIS has been contained … How infuriating.”

Speaking in the Hage Room as part of Plymouth State’s Presidential Candidate Lecture Series, the former Hewlett-Packard CEO said Obama’s policy on ISIS had “failed,” and was critical of the President for not speaking directly to the ISIS attacks, as French President François Hollande and British Prime Minister David Cameron did, she said.

She criticized Obama and former Secretary of State and current Democratic presidential candidate Hillary Clinton for having failed to lead America in fighting terrorism. She was also critical of Obama for removing troops so quickly from Iraq, and for “declaring victory” in Iraq, which helped the terrorist threat grow, she said.

“When the United States does not lead, the world is a far more dangerous place,” she said.

“When the United States does not lead, the world is a far more dangerous place,” she said.

Sometimes I think our current occupant is ‘The Leader of the Flee World’.

Unlike candidates Trump and Carson, Carly has always shown good instincts with regard to Islamic fundamentalism. Her broad stroke solutions to combat Islamic terrorism is to acknowledge who we are fighting against first, gather together the nations already in the fight and support our Middle Eastern allies by giving them what they’ve been begging for. Our allies know it’s their fight and Carly wants to support them by providing intelligence cooperation, bombs and matériel first, and without ruling out the involvement of US military ground troops second. I appreciate the fact that Carly is not afraid of naming our enemy, nor does she hold the foolish opinion that by offending Isis we are causing more hatred. They don’t hate us because of what we call them. They don’t hate us because they feel we haven’t been nice enough to them. They hate us because we are not Muslim. Isis cannot be contained, it cannot be appeased, it must be destroyed. I for one feel Carly would be a great leader in not just domestic economic policy but on the world security stage as well.

Two of the three outsider candidates are showing us every day they’re not capable of leading on foreign policy issues. Carly is clearly ready to step in and lead.

You mean like her breathtakingly stupid no fly zone idea for Syria?

Does she still subscribe to the foolish myth that Islam is a wonderful, humane religion that built a glorious, advanced civilization, and then some “radicals” hijacked it?

Does she know that the Muslims who hate non-Muslims are not confined to ISIS? Does she understand that we can never knew which “quiet, polite” Muslims will decide to perform their jihad duty directly?

Has she noticed that the degradation of European cities by their Muslim populations began long before ISIS appeared?

The “allahu akbar” chants by the Turkish crowd at that soccer game, when they asked for a moment of silence for the ISIS victims, indicates maybe not all cultures should be forcibly co-mingled, just to satisfy the leftist diversity gods.

But for political reasons, presidential candidates can’t make many broad claims about the problems with all Islam. At most they can point out that there are westernized “reformed” Muslims, but that many of even the apparent “friendly” Muslims still deep down put their religion’s theocratic dreams above our country, thus providing some safe haven for evil.

Our founders were interested in preserving their WASPY posterity, while protecting from a theocracy. They liked their own culture just fine, and were not “multi-culti”. The left’s notion that we must turn the country into a “salad” of different cultures, and that every variant must be given equal status in power and number … is just a means to tear down historic America.

Why we grant incoming foreigners a privileged “minority status” is never explained, except with “Diversity First”. The only reason EVER for quotas was slavery and maybe Jim Crow laws, or perhaps native Americans.

Tear down and destroy is necessary before the cultural Marxists can “fundamentally transform” US.

Hamilton further warned that “The United States have already felt the evils of incorporating a large number of foreigners into their national mass; by promoting in different classes different predilections in favor of particular foreign nations, and antipathies against others, it has served very much to divide the community and to distract our councils. It has been often likely to compromise the interests of our own country in favor of another. The permanent effect of such a policy will be, that in times of great public danger there will be always a numerous body of men, of whom there may be just grounds of distrust;—the suspicion alone will weaken the strength of the nation, but their force may be actually employed in assisting an invader.”

But Obama thinks he is president of the world, and that historic America is the problem. So he chides us and rules against the will of the people.

I understand that presidential candidates cannot be bluntly honest about everything. But nothing compelled Fiorina to make a speech in praise of a fairytale version of Islam shortly after 9/11 — a time when many of us were, instead, putting that event together with some unsavory things we had noticed about Islam and its devotees over the years, including the fact of its rapid expansion by conquest and its unceasing assaults on Europe for nearly a millennium up to 1683, and its continuing piracy on the high seas after that.

Fiorina’s rush to take the “let’s be nice to Islam” posture displayed poor judgment. I’m not convinced she has learned yet.

Obama is “a terrible and sickening setback” for the US.

It’s gotten to the point where even Democrats are actually showing their fear of Muslims. I think it’s always been there, it’s just now coming to the surface. Pundits and politicians are starting to express their real feelings because they realize these fanatics could kill them, and they are equal opportunity killers. It will be interesting to see what new words they coin to rationalize those fears. It certainly will not be Islamophobia.

Progressives in this country seek to undermine the traditional institutions, cultural norms, and social structures of our existing society, in order to replace them with their utopian vision. Conservatives are the protectors of much that Progressives wish to destroy and so, Progressives either ignore external threats or embrace them as natural allies in weakening the hated status quo. It follows that, to the Progressive, Conservatives are the one true foe.

Between WWI and the 1970s forces of secular reform were in the ascendancy across much of the Muslim world. That ended in the 1970s. One reason was that oil money pouring into Saudi Arabia and the ayatollahs take over of Iran provided money for a backlash, a counter Reformation so to speak. But another significant factor was that progressive political forces and the academic left that had once championed Western socialist style reform in the Middle East embraced the idea that those who preferred the ideas of the seventh century were more “authentic” than those who wanted to live in the 20th. The same forces also made it close to impossible to develop sources of affordable energy in West as part of the environmentalist movement.

Obama is part of this so called “progressive” tradition.

Long ago I read “Whirlwind” by Michener, about oil workers and the transition from the Shah to Khomeini. The US had its hands in so much of that, and in the end we made a lot of bad guys rich, but fueled the world perhaps.

The Cliff Notes version of that region’s history would be helpful to me, but it seems like the Green Party revolt was the last best hope for change in Iran (and the last Iraq war). Obama stood down even then, then beat feet out of Iraq, and finally delivered the ayatollahs their bomb. He sides with the Muslim Brotherhood, but he seems more anti-American than pro anything.

In nature, the female of the species is always the most ruthless. That’s why I think Carly is up to the job of CinC.

Some call it the mama bear syndrome.

There is another woman some call a king maker. She reloaded in 2012 and has had great successes in boosting select candidates who won elections, since, including Cruz. Trump is now benefiting from her efforts.

She is in sync with Limbaugh , Levin, Coulter to a degree, Laura ingraham, Sean Hannity and the like. There has been a powerful network established and Sen Sessions is included.

Sarah is kicking ass and taking names and doing it from the shadows.

Don’t get between a mama bear and her beloved country’s best interests… She will burn you down and likely you won’t even know who struck the match.

She, Sarah Palin, is an awesome role model for women in politics.

Carly is very intelligent and obviously a student of the middle East disaster Obama created.

If she can’t get into the first tier, she has flaws that need attention.

Her presence in the primary cycle is beneficial in several ways, in my view.

I doubt she will be nominated but not for her lack of trying.

What I believe is almost no one understands much about the majority voters’ state of mind this time, except for Cruz, Trump and Carson.

This cycle is push back on steroids and the voters have blood in there eye or wherever. It explains how totally flat footed Fox and the pundit class were to reactions over the first debate and the Trump campaign.

Voters are driving this bus.

Obama “at his most passionate when he’s attacking Republicans”……..and the only time he doesn’t need to use a teleprompter………….