Few actual facts are known about the shooter and his motives. 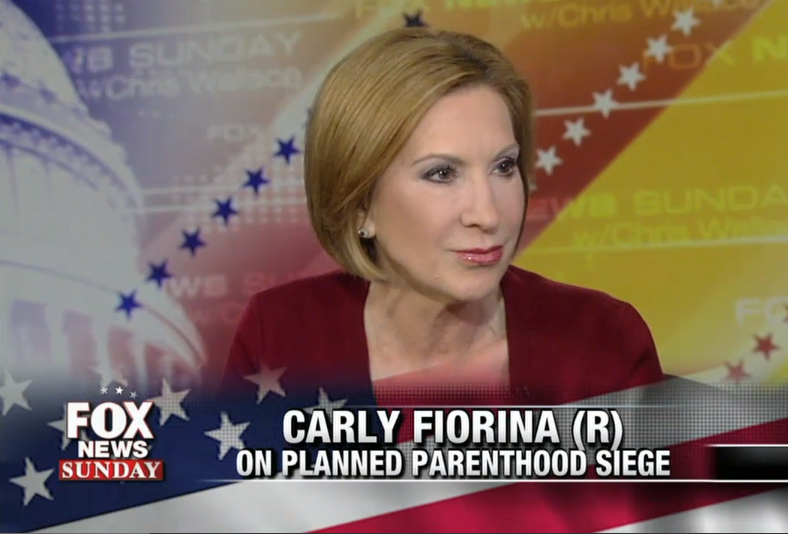 We haven’t written about the shooting at the Planned Parenthood clinic in Colorado yet, because the facts as to the shooting and shooter seem so in flux.

As is usually the case, there is a large-scale media operation underway to tie the shooter to the anti-abortion movement and specifically the undercover videos about Planned Parenthood’s sale of unborn children parts and tissue. The problem is, there are precious few facts proving such a connection. There are reports based on anonymous sources that the shooter mentioned “baby parts” to police, but we don’t know that for sure or in what context.

It’s also curious that the shooter does not appear to have shot people in the clinic, but did kill people, including a policeman, while shooting from the clinic.

Carly Fiorina was on Fox News this morning, and hit out at the attempts to tie the pro-life movement to the shooting as a “typical left-wing tactic.”

That reaction has leftist heads exploding.

I’ve been watching LI and am pleased that you’ve held off. You don’t want to step in it and not be able to clean it off your shoes. Even simply acknowledging how repugnant and horrifying the act was won’t appease the left. Let them keep scraping the barrel. It’s clear there’s nothing to pin on “the right” as they’ve surely been scouring 24/7 and have uncovered zilch.

The shooter owns two low end properties in Buncombe County, NC (Asheville) and lived in them for a while. However, on all the property records he maintained his residence remained in SC and he never registered to vote here. Why he moved to Colorado- where he did register to vote- is unknown.

You could sense the disappointment in the local reporters when they learned the neighbors thought him a mental case and reported that he never talked about religion or abortion.

“Why he moved to Colorado- where he did register to vote- is unknown.”

I can give a pretty educated guess. Colorado’s well publicized legalization of marijuana.

It’s human to speculate, and then try to fit in new facts as they emerge. The “professionals” in the media know this, and the responsible ones among them discourage it.

There has already been a lot of published speculation.

Whatever was going on in the mind of that idiot irrelevant: this isn’t a sporting event.

The compulsion by most people purportedly ‘on our side’ to tuck their heads in like turtles when confronted with crap by the left EXACTLY explains the rise and staying power of Trump.

If this freak proves to be the founder of the Tea Party, it changes nothing. (On the other hand, if it was Pee Wee Prebus, would that change anything?)

A failed CEO, becoming a wannabe politician doing something to become relevant.

Abortion is important, but it isn’t going to have major effect on the election.

Maybe not, but both terrorism and gun control will be extremely relevant, and that’s exactly why the Leftists are lying this way.

It is necessary for all morally sane men and women to join together and confront doctrines and practices that trivialize and debase human life. There are none more objectively degenerate than elective abortion and clinical cannibalism normalized by the pro-choice quasi-religious doctrine and the scientifically naive, but sincerely held belief in spontaneous conception.

Whatever faith an individual has that influences their perception of life, it should be clear that actions which debase human life have consequences with a general scope. Hence the near-universal establishment of administrative and moral laws that recognize a class of violations committed against the individual, society, and humanity.

Individuals, especially adults, who are presumably developed and mature, need to make better choices. The less developed and immature require guidance to avoid succumbing to these insidious traps.

That said, this debate is surreal. It surely takes place in The Twilight Zone or, in modern parlance, The Penumbra.

Colorado Police are still trying to determine how many people the shooter actually killed because when they got there the PPH techs were already hacking up the corpses and selling the parts!

Funny how Obama pushes Trayvon and Brown style criminal activity as black victimhood, and the resultant rioting and looting is deemed patriotic and heroic.

But we have video evidence of PP in direct talks over pricing baby parts, and some evidence that humane drugs are avoided so as to better maintain the human tissue. Yet there is no violence or rioting from the Christian community, nor from the majority of the country that disdains late term abortion.

Then one nut crawls out of the woodwork, and the left demands debate on the topic be silenced. Yet hateful rhetoric against cops continues, and the KKK gene accusations against white America is preached right from the White House, promoting racial discord and space to riot.

It is the same pattern on issue after issue, even as Merkel invites marauding Islamists to overrun Germany. At some point the western world will have to mount a real resistance against this debasement of our American/western values. It won’t happen by being silent in the face of the left’s hateful and dishonest assault on our liberties. We must get louder, not retreat into silence. Silence is surrender.

The Planned Parenthood shooting does have one upside.

This exercise does give us the advantage of letting us know exact who would be out there defending the “Soylent Green” plants from Detective Thorn.

Det. Thorn: Ocean’s dying, plankton’s dying… it’s people. *Soylent Green is made out of people.* They’re making our food out of people. Next thing they’ll be breeding us like cattle for food.

… or perhaps a battery.

To liberals (and that means the MSM), all conservatives are by definition racist, sexist, homophobic, Islamophoic and all purpose evil haters. Liberals are none of these things. As a result, everything is interpreted in this light. If a liberal makes a racist statement or commits a hateful act, it has to be rationalized away because liberals simply do not do that kind of thing. If someone of unknown political persuasion does the same, they must have been a conservative since only conservatives would do it. And clearly, if a conservative uses words like ‘golf’ and ‘hard work’, it must be racist because that is what conservatives are.

I have simply stopped paying much attention to the MSM, but unfortunately that doesn’t help solve the problem. They are preaching to more than just the choir – there are a lot of LIVs that take in some of this stuff.

But though my church group’s website ( http://www.unshackledaction.com/ ), we are encouraging Christians – we target evangelicals since that is what we are – to become more active in the public square. And that definitely includes not being defensive about being attacked as extremists. The extremists are the ones who have murdered millions of babies and who advocate being allowed to do so right up to birth (and in some cases, beyond).

You will know what the real story is because the media will stop talking about it, and that is already beginning.

The police have not described the gunman’s motive.

– Last sentence of the 8th paragraph in a 16-paragraph story in the New York Times today.

Probably the gunman babbled a whole slew of complaints about the world, and “baby parts” was just one of them.

If he mentioned Planned Parenthood at all it was probably to argue that everybody else kills people – why shouldn’t he?

Professor, since we on the right do not believe that speech was responsible for the actions of the shooter this past weekend but the left does (maybe) and now blames us for these tragic deaths, Wouldn’t that mean they wanted, encouraged and got their wish when the two cops were assassinated in New York? They have used this rhetoric before (numerous times) Speech = Hate = Killings, and I’m sure there are many more examples out there. I mean it can’t go both ways can it? / sarc

I would love to see you do an article on this premise (USA TODAY). Its either they believe it or it’s a lie, I don’t think it would be too hard to match up some statements from the left and hoist them on their own petard.

“hoist them on their own petard”

The left is so duplicitous on so many points, it is difficult to find one of their petards straight or strong enough to hoist anything.

I prefer “Hoist them on their own canards” … like the “Hands up don’t shoot” Brown plea that never was. They win the news cycle with lies and the right is constantly catching up, while the next series of lies are told in the next news cycle. It’s almost as if the media is “in on it”. 😉

But yeah, you make a good point. Obama tells his people “get in their faces” with their lies, and tells “us” to sit down shut up about the (macro-aggression) truth.

This is a page out of the Al Sharpton playbook. Get the lie out early before the facts are known. Because leftists are going to believe the lie no matter what the facts turn out to be.

Some playwright named Phelim McAleer wrote a play about Michael Brown’s death based entirely on the Grand Jury testimony. The very liberal LA cast showed up thinking that Michael Brown was somehow going to be vindicated. Or that at least events would be foggy. It wasn’t; it was crystal clear.

“…During the “Ferguson” rehearsal, the performers balked after realizing the only witness in McAleer’s play who says Brown had his hands up is immediately discredited by an FBI agent.

…McAleer’s play also ends with a damning exchange between a witness and prosecutor.

“Do you feel like this could have ended up any other way?” the prosecutor asks.

“Yeah, it could have, if Michael Brown had just stopped running” toward Wilson, says the witness, who is identified as Witness 48 in the grand jury transcripts, but who is given a pseudonym in the play and cast with a young black actress. “It could have ended another way. The officer had no other choice.”

No other choice, in other words, but to shoot Brown.

After those lines were read by actors Deborah Puette and Sydney A. Mason, a kind of awkward quiet fell over the cast members, whose bodies had been bent like question marks as they stared down at their scripts in a rehearsal space near Culver City.

The cast questioned the balance of the 55-page script, and even debated the justification for the shooting…”

It’s a comical read. These libs just couldn’t stand to have their precious narratives challenged. They’d rather quit and believe the lie than to accept the truth.

They’ll make perfect Hillary Clinton voters. If you’re going to vote for her clearly you must have complete and utter disregard, even a contempt, for the truth equal to Hillary Clinton’s own.

By the way the author of that LAT article was a typical liberal clinging to the “hands up, don’t shoot” lie. Even after noting that the one witness who claimed that Brown had his hands up was discredited by the FBI, the author was so attached to the narrative he still had to write that only “some” of the testimony supported officer Wilson. When ALL of the credible testimony, as the author was forced to admit at one point in the article, supported Wilson.

The narrative dies hard. Which is the leftist progressive phenomenon that PP, the MSM, and the Democrats are hoping to take advantage of here.