“Because I just said!” Reporter Kicked Out of Immigration Rally for…Asking Questions

“Because I just said!” Reporter Kicked Out of Immigration Rally for…Asking Questions

Threatened by the truth 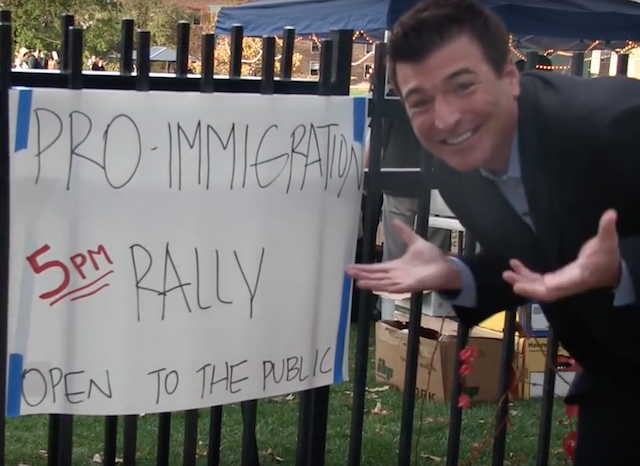 Last summer, a young woman named Kate Steinle was murdered by an illegal immigrant named Francisco Sanchez. Sanchez had been previously detained and then released by San Francisco authorities under the city’s “sanctuary” laws. After Sanchez’s act of brutality hit the headlines, activists and conservatives in Congress sprang into action, drafting “Kate’s Law,” which would block cities that refuse to abide by federal immigration policies from receiving federal law enforcement funding. Democrats blocked passage of the bill in the Senate, but the fight rages on, and for good reason.

Pro-illegal immigration activists are terrified of it. The MSM and White House did an excellent job keeping the administration’s inaction on the issue out of the press, but that hasn’t stopped the good guys from fighting back. Media Research Center reporter Dan Joseph took his team to a pro-amnesty rally in Boulder, Colorado, and started asking attendees if they had heard of Kate, or her namesake law. You can see what happened in the video below.

At about the 1:38 mark, MRC finally finds a rally attendee who has at least heard of Kate’s Law and is willing to say that illegal immigrants who commit violent crimes should not be allowed to remain the country. (Never fear—ten seconds later two women come together to blame the human condition for brutal murders, as opposed to the people who commit them.)

Keep in mind that everything we see in the video shows a normal journalist asking questions of people who don’t seem to particularly mind what’s happening. There’s nothing hostile about the exchanges happening here—just rally attendees being confronted with alternative viewpoints, and willingly responding.

Clearly, then, the rally organizers had no choice but to boot MRC’s entire team from the very public event.

Behold this silliness. The bouncer first confronts Joseph at around the 2:10 mark:

This is suppression in its worst form. These people are terrified of an honest conversation about illegal immigration because they know that if that conversation ever happens, they’ll have to answer not just for the actions of refugees and exploited people, but for the actions of hateful, violent people who have no business being granted the privilege of remaining in the U.S.

Apparently for these activists, scoring a policy point is well worth the risk of allowing actual murderers to terrorize innocent people.

Open Borders advocates are on very thin ice politically, therefore, of course they are jiggy.

By the way, Amy, it might have been good to also discuss the Sheriff of San Francisco who just lost his reelection bid Tuesday and how that all plays into to SF’s illegal alien sanctuary pander for democrat votes.

I understand that the lady (ex deputy) who beat the Sheriff at the polls is also a pro-sanctuary Dim.

I wouldn’t hold my breath waiting for any changes in that progressive cesspool.

I hear that, Paul. Swapping the sitting sheriff out for a new name/face/gender wont make their problem go away.

It has been said that people get the government they deserve. The citizens of San Francisco are getting it good and hard. But apparently, they are okay with it.

Boulder. Why am I not surprised.

What’s interesting is that they are completely ignorant of current affairs — the murder of Kate Steinle was national news, after all — and yet they probably think they’re intelligent, well-informed, and oh-so-rational and moral, like all leftists.

And not just “well-informed,” but particularly well-informed on the issue of illegal immigration and its effects. On this issue, as on the firearms rights issue, the left refuses to do a cost/benefit analysis. They pick a side (usually the wrong one) and don’t give a damn about facts that contradict their positions.

Since the Far Left Nazi’s is a religion now, they don’t tolerate dissenters. All who disagree are considered a heretic.

An example for comparison is the Symmetric Open Borders between U.S. states, it goes both ways equally.

You’d get an answer attempt, but your criteria of ‘plausible’ reason will completely flummox them.

At 1:50 on the video, all I could think of was Kate Steinle’s poor, grieving parents and siblings when I heard the woman in blue say in response to the killing of Kate “well, there’s always, you know what I mean, if there is a slip up…”

She is cold hearted and I don’t believe she cares a fig about the illegals – she just wants to be “seen” at the rally.

I disagree. I think she is a communist, dedicated to the cause, who will only feel differently if it where HER and HER FAMILY that were directly affected.