The silence from the White House is deafening.

Kate Steinle was killed by an illegal immigrant who had been deported at least 5 times and had a lengthy criminal record.

That’s an inconvenient fact for the Obama administration, apparently, because unlike in numerous other cases of interracial violence, for Kate Steinle the President had no words of comfort.

Megyn Kelly made that point, and it is devastating:

Here was White House Press Secretary Josh Earnest two days ago when asked about sanctuary cities. Can you find an actual answer in his answers?

(He addresses a proposal for Kate’s Law and Kate Steinle at 3:30, similarly with double talk)

National Review has a map of Sanctuary Cities (via Center for Immigration Studies): 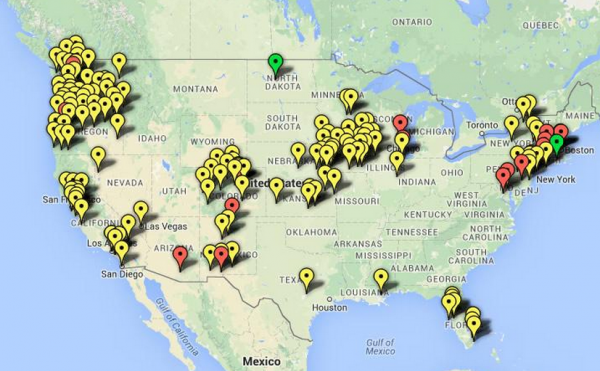 They are sanctuaries, but not for you. Or me.

Along the lines of taking back the language, why don’t we all call these “Vigilante cities” since they take the law into their own hands?

Or “secessionist cities”, since they are not subject to the Union as is all the rest of the U.S.?

And, let’s be clear, THIS is not “civil disobedience”. These are THE power-structure where they exist, and they are simply at defiance of the laws. They are not subjecting themselves to the laws as a moral statement.

“Confederate” cities? Asserting State’s (or, The People’s) Rights against the Federal government?

And in Democratic Party strongholds, too?

I once saw a priceless look on the face of a couple of liberal woman in one of these sanctuary cities.

We were both in the waiting room of Midas as our cars were being serviced. CNN was on and they were giving themselves a pat on the back for supporting Obama. Then a couple of old clunkers pulled up outside the shop and a group of Mexican laborers spilled out.

The spokesman for the group, who barely spoke English, explained to the manager they wanted the brakes of one car worked on and would pick it up later. The manager asked for contact information, which the spokesman could not provide. The manager was obviously worried a repair bill would be more than the rust bucket was worth and this crew would skip out without paying, so he refused to serve them.

As the Mexicans back into the two wrecks one of the liberal woman looked at them and then glanced at her own pristine late model car on the lift in the service bay. You could see her imagining getting T-boned by a car with bad breaks driven by unlicensed illegals without insurance.

I am afraid Houston in one of the cities, also….

I’d never seen the documentary “Cocaine Cowboys” before. I just watched it on Showtime this afternoon. In the clip below, check out the politically incorrect way public officials talked about the Mariel boatlift when Miami was invaded by Cubans in 1980. Compare that to how both parties walk on glass talking about the current illegal invasion.

It’s not in the clip, but in the full movie there’s a brief appearance by a much younger Rudy Giuliani talking about the Cuban rapists and murderers being let into the country. He won’t use language like that today because he’s got the word from the GOP establishment that if he does it might hurt the feelings of Hispanics and that might hurt the GOP in elections. So neither party wants to protect our sovereignty because they care more about pandering to help them win elections than they care about doing the right thing for the country.

I am not anti-Hispanic, anti-immigrant or anti-immigration. I’m pro lawful immigration. We have immigration laws because a sane country wants to keep the murderers, rapists, hardened criminals and the mentally unfit out.

As much as I dislike Trump, I’m glad he brought this issue to the media.
It took the O administration so much time and effort to find cases where he can claim police racism or anti-black violence, and most of those are duds. But as soon as Trump started talking about illegals, tah-dah! — a very real murder. Because it’s actually a common occurrence.

If obama had a son, he’d murder someone who looked like Kate Steinle.

What are we to make of Richard Fowler?

I suppose he might be like a lawyer who is obliged to provide his guilty client with the best defense possible. Perhaps he needed the money. Perhaps Fox forbade him from deviating from the Kool Aid.

One thing I liked about Bob Beckel was that he would occasionally admit that his side of the aisle was wrong about something. Fowler reminds me that one may smile and smile and be a villain.

The key question that wasn’t asked: how would ‘comprehensive’ immigration reform stopped this murder? Under the oblamo plan, he would still have been out on the streets, just with a green card.

AND the implication is that the Vigilante cities would THEN obey THAT law, ’cause they’d like it and it would be all cool n’ stuff…

which is BS UNLESS that law essentially gave illegal invaders carte blanch.

Kate Steinle was killed by an illegal immigrant who had been deported at least 5 times and had a lengthy criminal record.

We need to STOP concatenating the word ‘illegal’ (and worst ‘undocumented’) with ‘immigrant’. It’s a part of a series of oxymoron and foul attempt by the Left to destroy words, reassign meaning and sympathy to a class of criminals.

An ‘immigrant’ or ‘resident alien’ is a legal title conferred to a foreign national who acknowledges the laws and sovereign borders of the US and has (or intends to) renounced his native citizenship to better pursue the economic, legal and voting rights that are not available in his native country.

An ‘illegal’ is a foreign citizen who do NOT recognize the sovereignty of the US but feels he’s entitled to the permanent economic opportunities and legal benefits that are founded by that sovereignty.

The word ‘illegal immigrant’ is about as absurd as someone breaking into my house and distinguishes himself an ‘illegal guest’.

Once upon a time we actually called them “illegal aliens.” Yes, children, it’s true. And nobody got into a snit over such language, either, because people weren’t sniveling cowards.

At the Center for Immigration Studies I found this tidbit.
http://www.cis.org/disabling-detainers
It appears that ICE and the current administration have been encouraging “sanctuary” and discouraging agents from doing their jobs.