Maybe so, “thanks to the unique math undergirding the Electoral College” 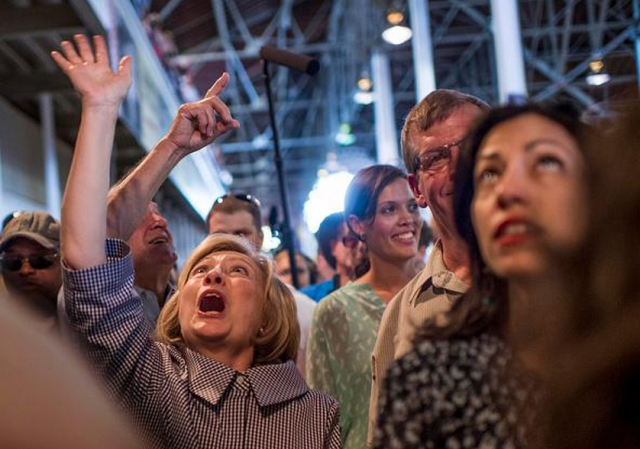 As the Hillary campaign tries to rally in the face of favorability numbers that must be causing more than a few sleepless nights at Camp Hillary and new financial boosts to Bernie Sanders’ campaign, the news for Democrats is not all discouraging.  Apparently, there is a way that whomever the Democratic nominee, a Democrat can win the White House . . . with the help of illegal immigrants and a “glitch” in the Electoral College system.

Paul Goldman and Mark Rozell, writing at Politico, have put forth an interesting premise:  “noncitizens decrease Republican chances of winning the White House next year.”  In their article, entitled “Illegal Immigrants Could Elect Hillary,” Goldman and Rozell explain:

The right to vote is intended to be a singular privilege of citizenship. But the 1787 Constitutional Convention rejected allowing the people to directly elect their President. The delegates chose instead our Electoral College system, under which 538 electoral votes distributed amongst the states determine the presidential victor. The Electoral College awards one elector for each U.S. Senator, thus 100 of the total, and D.C. gets three electors pursuant to the 23rd Amendment. Those electoral numbers are unaffected by the size of the noncitizen population.

The same cannot be said for the remaining 435, more than 80 percent of the total, which represent the members elected to the House.

The distribution of these 435 seats is not static: they are reapportioned every ten years to reflect the population changes found in the census. That reallocation math is based on the relative “whole number of persons in each state,” as the formulation in the 14th Amendment has it. When this language was inserted into the U.S. Constitution, the concept of an “illegal immigrant,” as the term is defined today, had no meaning.

Thus the census counts illegal immigrants and other noncitizens equally with citizens. Since the census is used to determine the number of House seats apportioned to each state, those states with large populations of illegal immigrants and other noncitizens gain extra seats in the House at the expense of states with fewer such “whole number of persons.”

According to Goldman and Rozell, the “unique math undergirding the Electoral College” gives Hillary (they are presuming she’ll be the eventual Democrat nominee) an edge.

These three states, which have voted overwhelming for Democrats over the latest six presidential elections, would lose seven electoral votes altogether. The GOP’s path to victory, by contrast, depends on states that would lose a mere three electoral votes in total. Republican stronghold Texas would lose two House seats and therefore two electoral votes. Florida, which Republicans must win to reclaim the presidency, loses one seat and thus one electoral vote.

Following is a brief video explaining the premise:

Goldman and Rozell explain that “four electoral votes statistically cast by noncitizens” and that these will fall in “must-win” Republican leaning states.

U.S. elections have been decided by far narrower margins. One electoral vote decided the 1876 presidential election. A swing of three electoral votes in 2000 would have elected Al Gore. A glitch in the Electoral College system enabled Aaron Burr to come within one vote of winning the presidency over Thomas Jefferson in 1800. Though they can’t cast an actual ballot, we effectively allow noncitizens to have an indirect, and possibly decisive, say in choosing the President.

Noting that “the key to Republican hopes to win 270 electoral votes next year therefore revolves around the three biggest swing states: Florida, Ohio and Virginia.,” Goldman and Rozell conclude that Florida is going to be key for the Republican nominee in 2016:  “Obama carried Florida last time by only 0.9 percent. Hillary Clinton suffers from an upside down image among Sunshine State voters, 37 percent having a favorable opinion but 57 percent holding a negative one in a recent poll.”

Leftists always find a way to buck the system. So they will end of causing Hillary to be elected. All this time, people have been worried about Trump sucking the necessary votes. I’ve always disagreed with them and advised them that we need to worry about the shenanigans running the show behind the scenes. They will do their best this time to ensure a leftist regime continues in this country. We are so in bad shape.

How the heck can anyone be this dumb?

In a manner of speaking, affirmative action.

This issue is probably one of the major historical reasons why the US has such a clumsy electoral system.

They needed a weird electoral system because a good chunk of the country had significant non-voting populations; i.e., slaves. The Electoral College gave more weight to the votes of those states (by giving them more electors) than they would otherwise have had, without actually allowing the slaves to vote.

(1) non-voting immigrants, both legal and illegal, are counted by a census;

(2) the apportionment of electors is made with those counts in mind;

then including non-voters in apportionment of Electoral College votes will tend to skew Federal elections toward the Dems. Now as then, it makes no difference who those non-voters are; legal immigrants, illegal immigrants, slaves, students “overstaying” their visas, persistent tourists, whatever. As long as they count for census purposes they affect Federal elections even if they themselves don’t vote.

It’s a good theory, and seems mathematically sound. But all it really does is recognize that the same forces which perverted Federal structure in the bad old slavery days are still causing disturbances today. And, both then and now, those disturbances probably favor Democrats.

Why can’t our taxpayer-funded political attack committee (aka “House Select Committee on Benghazi”) cook up even one reason to suspect that Hillary Clinton has done anything wrong? This is the eighth “investigation.” We’ve coughed up millions of tax dollars to harpoon this Democrat and what do we have to show for it? So much for “fiscal responsibility” I guess.

Low information voters and low legal threshold voters will vote for their kind.

And, unfortunately, there are more and more of them.

From what I remember only two states split their votes Maine and Nebraska and not even that is an actual split based on popular vote, if I remember correctly the winner of the popular vote gets the 2 Senate votes and then the votes for the members of the house are split by popular vote in that congressman district, 2 votes for Maine and 3 votes for Nebraska. Which is why they are usually 2 of the last to finalize their results.

Or maybe it means that these 2 states will be vitally important in this years elections.

“…Though they can’t cast an actual ballot…”

Missed a word there. “Though they can’t legally cast an actual ballot…”

The article is based on the idea that the number of electors is a static number. The House of Representatives has been long overdue for reapportionment, which would affect the electoral college. The number of citizens represented by each member of the House needs to come back down to a more “one for every thirty-thousand” calculation.

A glitch in the Electoral College system enabled Aaron Burr to come within one vote of winning the presidency over Thomas Jefferson in 1800.

This had nothing to do with apportionment of electors. Nor was it a glitch—the system worked according to design; but the design was not well thought-out.

In the 1800 election, each elector had two votes. The candidate ending up with the most votes would be president, and the next most, veep. However the Democratic-Republican electors, giddy as schoolgirls after defeating the Federalists, all cast their two votes for the two most prominent members of the party, Jefferson and Burr. If a single one of them had thought about what was going to happen, it wouldn’t have happened; but the candidates ended up tied for both offices. The election went to the House; fifty ballots later the tie still held. It was finally broken by Jefferson’s appeal to Hamilton to swing his New York supporters his way; this was a big deal for both men, as at that time the two were … well, let’s just say not getting along well. Jefferson became President, at the price of an enmity between Burr and Hamilton which would end on Weehawken Heights some three years later.

The electoral silliness was patched up in 1804 with the ratification of the 12th Amendment.

I thought Hamilton hated Burr even before the election. He viewed him as a panderer, who only wanted power for power’s sake.

Oh, he did; which was why the Jefferson camp believed—correctly—that Hamilton could be recruited to Jefferson’s side.

And the enmity between Hamilton and Jefferson was very real, and well deserved. Jefferson routinely referred to Hamilton as a “foreign-born bastard” (as a native of what’s now St Kitts-Nevis), had published some stolen personal letters of Hamilton’s, etc. etc.

Nevertheless, Hamilton believed that Jefferson had principles, even if they were the wrong ones. Burr he considered to be entirely without principles. And he opted for a principled man over an unprincipled one.

Burr had been a handy man to have around when the Democratic-Republicans were bashing Federalists. But as Hamilton realized, that hardly made him good Presidential material.

There are twice as many pro-Liberty, fiscally conservative people in other parts of the world.

They still beat the number of pro-socialist illegals that here.

Get them to immigrate here to counter the tide.

Q: Will illegal immigrants elect Hillary?
A: Whether they will be successful or not is anybody’s guess. But they WILL try.

Goldman and Rozell explain that “four electoral votes statistically cast by noncitizens” and that these will fall in “must-win” Republican leaning states.

This is nonsense. Aliens do not vote. These electors who statistically represent aliens are elected by the citizens in their states, and therefore represent the interests of those citizens, not of the aliens.

The same applies to prisoners who swell the population of the area where the prison is, and are “represented” in Congress, but have no say in electing “their” congressman, who is elected entirely by the people who live near the prison, and represents only their interests.

In exactly the same way, 3/5 of slaves used to be “represented” in Congress and the Electoral College, but “their” representatives were elected by the free people in their area, and thus represented those free people’s interests.

Have you never heard of voter fraud or rotten burroughs? The Dem coalition of the fringes depends on voter fraud. I actually was forced to participate when I was a minor SO IT KNOW IT HAPPENS FIRST HAND.

If you cannot understand the concept of rotton burroughs and how they subvert democracy you are unqualified to comment on this subject.

Also, this has nothing to do with illegal aliens. Goldman and Rozeell counted all aliens, not just illegal ones.

If she is elected, several states will secede from the union. And they’d be wise to.